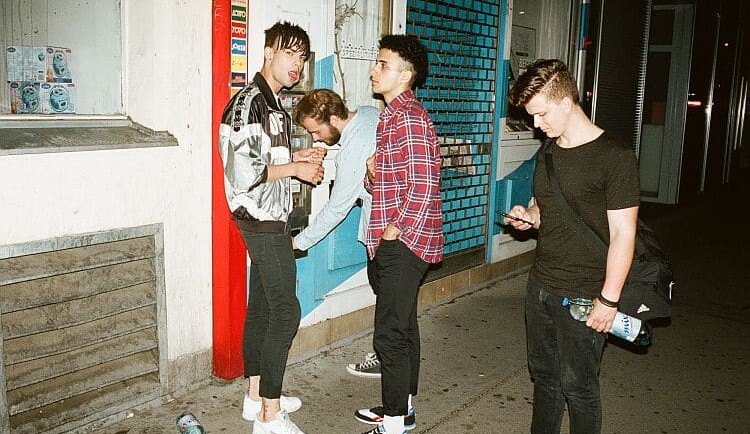 Punk’s not dead. A saying that is just as valid as ever. The new record of the CRISPIES, released on Seayou Records, proves that there is still a lot of power in punk.

But you have to add that the new album is more than just punk. “Fake Leather” (Seayou Records) brings together many different styles of music. But they have one thing in common: strength and energy. Because one thing you can’t say about the album is that it’s losing its drive.

No sir, the power-bus picks you up with the first song – “No Refunds”. And then it propels you along full speed ahead. And you can’t get out either! This is also one of the biggest strengths of the album. You just get a little addicted to the power and just want to keep on raving. The music exhibits heavy rock’n’ roll influences, which can also end in Blink-182-esque sing-along songs.

An example of this is the third song “Easy”. Singer Tino Romana sings about his friends and how he wishes that they would not disappear in drug abuse. The rather sad text has an attitude that is very reminiscent of those teenage years in which you wouldn’t even dream of adults being able to understand you. The song sounds wonderfully retro, especially if you were young in the late 1990s and early 2000s. And then there are the dark and melancholic tracks.

In keeping with millennial themes, one of the more subdued songs is called “Lost My Phone”. And since this is the nightmare of every millennial it isn’t a very happy song. “Lost My Phone” is the start of the slower phase of their album. “Candy” is another piece reminiscent of the early 2000s and at the same time of the musical minimalism of the brand-new genre Cloud Rap. The vocals are also auto-tuned, which makes “Candy” a Crispie version of a Yung Lean song.

PARTY-TIME WITH THE CRISPIES!

After the two “contemplative” songs, the teen party kicks in again. Yes, “Party” is the keyword that probably best describes this album. In fact, the songs seem to be arranged like the chatter of a good house party. There is the brilliant start, where everyone is still incredibly motivated and have their first drink. Then there is the quieter part, when the spirit flags and you go to the terrace for a breath of fresh air.

Then there is the moment when the switch is flipped and everyone is back on the dance floor. That phase starts with “Sold”, a song that sounds like a second wind. Even if you were tired before, you are now wide awake again. The Crispies are really trying to keep the energy level as high as possible. And they do that pretty well on “Fake Leather”!

Anne-Marie Darok (Translated from the German article by David Dempsey)