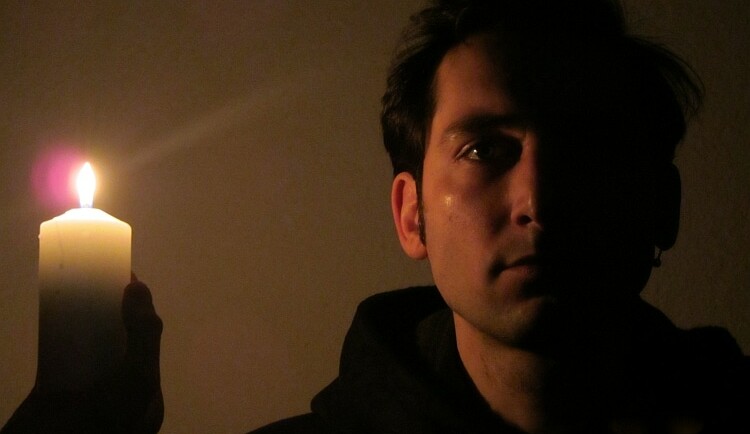 Two years ago Lorenzo Troiani won the impuls composition award. His new work “We are Destroyed” will be premiered by the Klangforum at the opening of this years impuls festival. Reason enough to ask Troiani, who inspects violins like UFO’s, for an interview. Ruth Ranacher talked to the talented composer, who studied under Sciarini, over Skype.

In your composition statement you identify the act of questioning as the fundamental begin of every reflection. What space do you create for yourself with that musically?

Questioning, for me, means to forget what one knows. Or at least to try. Why do I have to write for a particular instrument? What is an instrument? What is a performer, an interpreter? Basically its is about being able to turn out the lights and be able to endure the fear and disorientation.

My approach on the piece Cara è la fine for solo violin (2015) is a good example. The violin is an instrument with huge symbolic and historical meaning. My goal was to deform the relationship between the violin, the performer and the audience.

To do that I first took my violin and left it laying on my bed for about three months. After a while it became nothing more than another piece of furniture for me. Every day I asked my self what all a violin could be, and opened up possible infinities for myself. For months i acted like a scientist that was examining a UFO or extraterrestrial object. What is a violin? How does it work? How does one use it? What does it sound like? Then, slowly, I found a way.

Whenever a question comes up, there is philosophy. But music doesn’t have to answer, it opens up new possibilities instead. Perhaps that is also the role of philosophy?

As a composer you examine the distance between body and sound, organism and instrument. You also name the founder of deconstructionism, Jaques Derrida as a decisive influence on your musical creation. Why?

My music works like a magnifying glass. For me it is about crystallising an event, to get closer in order to see all of the small relationships. To be attentive. Eventually I manage to hear in a different way, and to discover previously hidden moments and reverberations.

I look for life in every acoustic phenomena. I try to hear oscillations and to feel a heartbeat in every corner, every edge. Because it is important. In the contrabass piece one plays on the edge of the instrument, the tailpiece.The body of the performer has to create a new relationship to the instrument in order to always play on the tailpiece. That changes the center. The shift is not just musical or acoustic, but physical. That is quintessential to my music.

When the tightrope walker swings, he creates space

What fascinates you about the work of Paul Klee? And how does that reflect in your music?

I am particularly fascinated with the little color lithograph “Der Seiltanzer” (1923) from Paul Klee. A tightrope walker balances on the geometric structure of a line with his balancing pole. He is an unsteady figure, swinging on a line. When the tightrope walker swings, he creates a space beneath him that is based on geometry and structure. This picture inspired my work as a composer.

In 2015 you won the Impuls composition award. Which possibilities have opened up for you as a result?

I had a lot of luck, it is a great opportunity for a composer. Through the impuls Festival I had the chance to work together with the Klangforum and the wonderful intendant Ute Pinter. This ensemble has a lot of of experience interpreting contemporary music and the music I love. The composers competition also gave me the chance to work on a piece that I had had in my head for a long time. I really dreamt for a long time about writing this piece.

Your new work “We are destroyed” (impuls Kompositionsauftrag) will be premiered at the festival opening. What happens if we see things negatively?

“We are destroyed” is like an etching or a photographic negative. We all know the darkness, an experience that everyone frequently has. When we turn off the light, we can only recognise rough outlines. If we move our hands, for example, they appear out of the darkness and then slowly disappear again. To some extent, looking into a dark room is looking at dissolving borders. They are our own borders and we begin to feel how the things pulse, oscillate. Like Paul Klee’s tightrope walker.

Understanding the ensemble as an organism

Please tell us a little about the development of your new piece.

For “We are destroyed” I have been resolutely following a way and putting my ideas together since 2010. The first idea was to build a giant body and approach the ensemble as an organism. My question to that was: How does an ensemble breathe? How does it pulse? The second idea was to dissolve the borders between individual instruments in order to make an persistent aural deformation possible. What happens when we can no longer recognise an instrument?

The third idea was to musically move in the gaps. What happens when we move the center of the sound body? Another idea to base the form on a “freeze” and use slow and persistent shifts in order to have a continuing movement in space. “We are destroyed” should unite all of those ideas.

Every dialectic deals with the end: the end is endless..

You also wrote the miniatures “Dialectica I – III” (2010) that have the subtitles “Humana”, “Mechansimo” and “We are destroyed”. What title would a “Dialecta IV” carry?

With “Dialectica” I originally wanted to write a cycle of electronic pieces. Back then I felt more free with electronic music and could really work on the deformation of the material. That’s how the pieces “Dialectica” I,II, and III came about. This cycle turned out to be particularly important for my acoustic music. I learned to think differently.

Every dialectic deals with the end. The meaning of the end plays a very important role in my music and my thinking. The concept itself is based on an infinite amount of meanings. It could be to bring things to their ultimate consequences, or to imagine an end. I have thought and written a lot about these various meanings since 2010. The “Dialectica” cycle represents the beginning of that. Later I wrote “Cara è la fine”, “Studi sulla fine” and “Antigone”. What does the end of composing mean? Couldn’t we understand composing not in the sense of cum-ponere (compound or put together [this is word-by-word translation from Latin cum ponere]) but also in the sense of tarns-ire (go through [this is word-by-word translation from Latin trans ire])?

If it was possible to pass through the end, then a “Dialectica IV” would also be possible. Is there something after the end? Now I can answer “The end has no end”.
Ruth Ranacher (adapted from the German by Dave Dempsey)