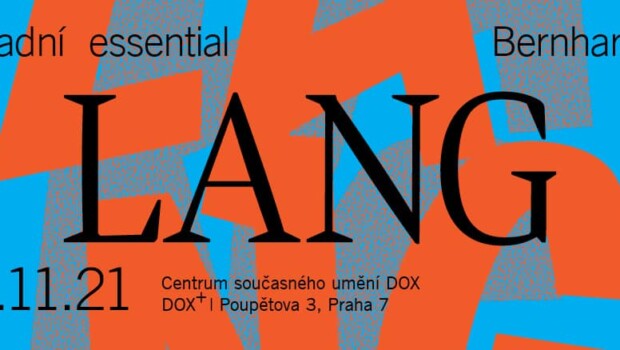 Ostrava Center for New Music returns to DOX+, the music hall of the Dox Center for Contemporary Art, with another iteration of the ESSENTIAL concert series. This year’s Essential Changes concert will follow up on orchestral programs with the music of Morton Feldman and Iannis Xenakis and will feature the works of BERNHARD LANG. The compositions of LANG go beyond the acoustic sound experience, since the meaning of his creative work is just as important as the musical result.

The World of Loops of Original Austrian Composer at DOX+

Lang’s orchestral compositions rendered by amazing soloists will be heard on Tuesday, November 16th, 2021. Lang’s universe of sound loops and repetitions, referring not only to the music of diverse periods and genres, but also to purely contemporary technological processes, will materialise in three compositions from the last five years. PFK- Prague Philharmonia with the international Ostravská banda orchestra, conducted by Johannes Kalitzke and Petr Kotík, will take up the challenging task of bringing these extremely difficult compositions to life. Bass clarinetist Gareth Davis and pianist Miroslav Beinhauer will perform the solo parts.

The work of Bernhard Lang is a shining example of modern contemporary art; the roots of his music thinking are truly abundant: his inspiration sources include not only European classical music or avant-garde of the 20th century, but also jazz, free jazz, rock, punk, techno, EDM, electronic and computer music. Moreover, he employs various philosophical concepts in his work, be it the theory of difference/repetition of Gilles Deleuze or Leibniz’s concept of monadology. These worlds of ideas often materialize in Lang’s music in the form of returning sound loops. Instead of creating a mediative atmosphere in the spirit of minimalism, they reappear irregularly, in sharp cuts and unexpected mood twists. For maximum effect, Lang makes use of contemporary technologies and the aesthetic of sampling, to which he resorts in the spirit of his motto: „If everything has already been said, repeat it!“

Besides studying music (composition, jazz, classical piano), Lang also studied philosophy and German philology. His work is far from unknown to the Czech audience –  he is considered very much as an insider in the Ostrava music circle. His compositions have regularly appeared at the Ostrava Days festival since 2009 and in 2014 the NODO / New Opera Days Ostrava festival presented his opera Re:igen, which aroused great controversy with its overt treatment of sexuality. Bernhard Lang also returns to Ostrava as a sought-after tutor at the Institute of Ostrava Days. His orchestral composition Loops for Leoš, whose third movement is now in the process of being completed for its Prague concert, testifies to his close ties with the region of Leoš Janáček. Bernhard Lang belongs to the most sought-after European composers (in 2021, the premiere of his opera Playing Trump was performed at the Hamburg State Opera and another of his operas Der Hetzer premiered at Theater Dortmund).

At the DOX+ music hall, there will be the opportunity to hear two concerts: the first for bass clarinet and the latter for piano. Both of them put extreme interpretational and physical demands on the soloists. A no less important role is also played by the orchestra, creating a sonically dense and rhythmically breathtaking structure with which the solo instruments closely collaborate. Similarly as in Loops for Leoš, the two compositions refer to important music personalities of the past. In Loops for Davis, the main source of inspiration is American jazz trumpetist and composer Miles Davis. In Loops for Ludwig, it is Ludwig van Beethoven.

Monadology XXXIV “Loops for Ludvik” (2016) for piano and orchestra

The concert is produced by Ostrava Center for New Music in collaboration with the Center for Contemporary Art Dox.