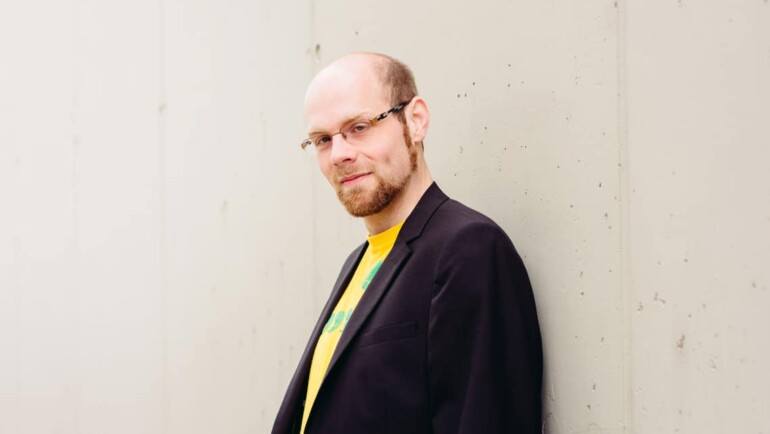 He stands as one of the organizers behind the specialist ensemble for new music PLATYPUS, which gives him the opportunity to be in the background as a composer with reserve and humility. However, with his mere 31 years of age, HANNES DUFEK has already exhibited a significant catalogue of works, which proves him to be an innovator as well as an expert in the field of music-theater for children.

Even when he is not portraying a dog who is under the suspicion of having crapped upon the head of another animal, Hannes Dufek is a music man upon whom one can rely on. The successful production “Vom kleinen Maulwurf, der wissen wollte, wer ihm auf den Kopf gemacht hat“ (2014) (“About the small mole who wanted to know who crapped on his head”) which was presented again at the Dschungel in Vienna last year between October 27th and 31st, brings him once again into the field in which he feels like a fish in water: music-theater for children and young people. Apparently without effort he is able to find the balance between the equally important entertaining elements and the more serious moralizing aspects found in these stories with his sounds and melodies, that are often taken up and gladly accepted by the young audiences; in the intermission or even after the finale they continue to be sung.

From the Monster Score to Practicality

It would of course be one-sided to categorize Dufek only in this particular genre and to forget that he is an “absolute” composer who is equally completely at home in more complex systems. The search for new and unusual paths is essential to him – even when he has in the meantime accepted and realized that the two-meter high musical scores that he created during his student days are ultimately a little too unpractical for the work with musicians. One of his principles in the meantime has become that the interpreters and performers of his music should really be able to play and enjoy the music.

From Flat Feet and Duck-Billed Platypus’

Born in Vienna in 1984, Hannes Dufek studied composition at the University for Music and Performing Arts in Vienna with Chaya Czernowin and Michael Obst. Still during his studies in 2006, he was the co-founder of the Association for New Music Platypus, whereby it is doubtless no shame to not know that this term the Greek word for “flat feet” is and the english word for a duck-billed amphibian. He has stood in front of this association for almost a decade now, and has been the essential reason that the still thus named ensemble has quickly developed into one of the most important Austrian “players” in the field of new music presentation. The unfortunate logical reverse side of the organizational success is the lack of time for his own creativity, but this does not seem to bother him. He has learned about the importance of such cultural-political efforts both for his colleagues and also for himself.

A Knack for Young Audiences

Since 2011 Dufek has also been active in the association makemake produktionen, with which he had first gotten onto the creative path of music-theater for children, a path which he can no longer imagine not following. The first project in this field was “MOMO or the Legends of Today” that was premiered at Wien Modern in 2011 in the Dschungel Vienna and was awarded the STELLA in 2012 in the category “Outstanding Music.” In 2012, he created for the Staatstheater Oldenburg “Sturmkind“ (“Storm Child”) which was Dufek’s first confrontation with an opera house of this larger size. It was followed in the spring of 2013 by “Major Dux,” in which he arranged elements from George Gershwin’s “Porgy and Bess,“ a commission from the Tonkünstler-Orchesters Niederösterreich im Festspielhaus St. Pölten, as well as “Supernova” created in 2013 for the festival SZENE BUNTE WÄHNE in Horn, Austria. In 2014, “The Mole” was reprised (again in the Dschungel). The Carinthischen Sommer 2015 presented him the challenge of “Vom Leben und all dem” (“About Life and Such”): an attempt at integrating children and senior citizens together as performers simultaneously.

But now back to Dufek the concert composer and his far more progressive works. Also here there are significant works worth observing already in his development: in 2008 he was chosen for the promotion program “Young Austrian Composers“ by the mica – music austria in cooperation with the Österreichischen Komponistenbund (ÖKB) and the Austrian section of the IGNM and his award work “(Inner) Solare Music“ for ensemble was recorded for the accompanying promotion CD. As a commission from Wien Modern 2009, he wrote “große musik” for flute, clarinet, violin, cello and tuba that was performed successfully twice. In 2010 he was awarded the first prize in the composition competition of the RuhrTriennale Köln for the ensemble work „landschaft_interpretation; wiederkehr, neuanfang, spiegelung; verdopplung.___ bild (die strahlkraft des augenblicks)“. (“landscape_interpretation: return, new begin, reflection, duplication___picture (the gleaming power of the moment) He was honored to be performed again at Wien Modern already in 2011 with the choral work “wider” (“against”). For the project „arresting images. fragments of media society“ for harpsichord, tapes, looper and live electronics he was awarded the prize of the Theodore-Körner-Funds in 2012. In 2013 he was “composer in residence“ at the 6th Shanghai New Music Week and in the same year he took part in impuls in Graz, Austria. The string quartet „der horizont eine rose das andere (Übungen in Vergänglichkeit II)“ (“the horizon is a rose of the others (sketches in transience II”) was premiered at the World Music Days 2014 in Wrocław, Poland and was awarded an „Honorary Mention“ for the ISCM Young Composers Award.

Central to many works by Hannes Dufek is his approach to formal constructions. He loves to shape his music with fragmentary parts, which are finally put together into a complete piece by the interpreters themselves and their own, unique decisions. A key work of this method is the opus “weil die dinge im fluss bleiben müssen. Übungen IV“ (“because the things in the river must remain there. Exercises IV”) for clarinet, violin and piano which after the premiere in Japan in 2014, will be performed again in the Brucknerhaus Linz Austria this year on November 19th. One of the reasons for this form of composition is to allow the performers the possibility of a fully individual open approach to the composition, while the classical forms give them, as well as the audience, a quasi pedagogical way of perception.

Composing is for Dufek the creation of spaces in which meaning can be created – not the creation of meaning itself. Also in pieces when he holds to a loose formal structure, it is important for him to create the greatest possible free space and open interpretations, such as the somewhat importance of the structural lengths, rhythms, and kind of additions in “AUSSEN“ (“OUTSIDE”) for tenor dulcimer and objects (2015). None the less, in relation to the tone material, the freedom dominates again for the composer when he renounces tonic harmonies or tone rows mostly and concentrates on less strictly created evenly improvisational structures. “[….} the more open the ANLAGE, the better.” (Dufek)

“All Dramatic Forms are the Same”

It is not surprising, that the genre of opera outside of his children productions is foreign to him. His declaration “All dramatic forms are the same” expresses then more of a disinterest in old-fashioned forms, but one must be able to accept at the same time, that should an appropriate commission come along, he would find his own adequate approach and solution. Further new works planned for this autumn include „AUSSEN II“ (“OUTSIDE II”) for soprano, clarinet and various objects (2015) and „neben sachen“ (“side things”) for voice, recorder and electronics for das Swiss Duo UMS’n’JIP. And most recently, in the spring of 2016, the ensemble PLENUM in Switzerland will present a new piece for seven recorders, in which one can – in following the character of the ensemble and the philosophy of the composer – expect a further large amount of freedom.