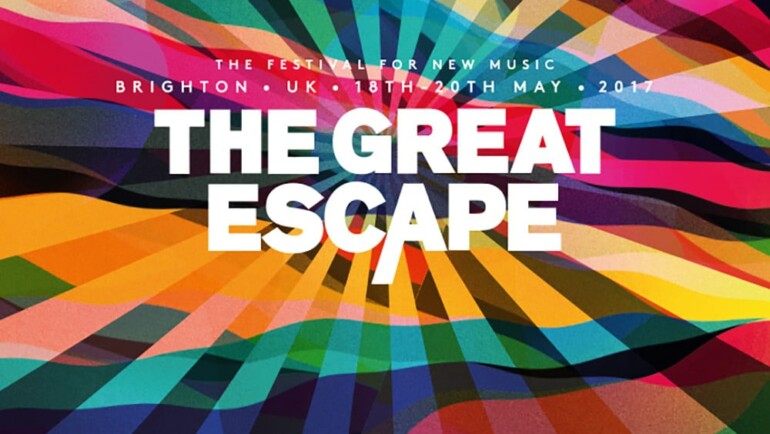 The Great Escape (TGE) is a festival that showcases emerging artists from all over the world. Over 450 up and coming bands play in 35 Brighton venues, which makes TGE the first place to discover new favorite bands and see them in an intimate setting before they go on to headline major festival stages. Among the the first artists that will join the 2017 line up are Austro-American songwriter James Hersey, Rag’n’Bone Man, The Age Of L.U.N.A, Ray BLK, Cabbage, Goat Girl, Yonaka, Gurr, Indigo Husk, Sophie Hunger and many more. In the last years, Austrian bands such as Leyya, Salute, Mieux, Bulbul, Mile Me Deaf and more played successful showcases in Brighton.

TGE is also attended by the music industry who are on the hunt for the next big thing. TGE runs a convention alongside the gigs featuring insightful panels, topical debates, keynote speeches and networking opportunities in abundance. The Alternative Escape, the Brighton Dome Shows, secret gigs, club nights and spontaneous collaborations all add to the festivities. Read more: www.greatescapefestival.com

Those who want to get a taste of Austria in one quick stop can join us for a festival warm-up at Prince Albert on Thursday, 18th May and enjoy four Austrian showcases and a B2B reception. It is a perfect chance to not only see some great Austrian bands but to mix and mingle with members of the Austrian music business.
Line-Up/Timetable:
Molly 12:00pm – 12:30pm
Hearts Hearts 1:00pm – 1:30pm
James Hersey 2:00pm – 2:30pm
Steaming Satellites 3:00pm – 3:30pm

In addition, Salute and Matt Boroff (Alternative Escape) will perform in Brighton.

JAMES HERSEY has a talent for songs that will strike a chord with anyone who’s ever experienced heightened emotions, i.e. everyone. Happy to explore musical genres, utilizing his grounding in folk, pop, and rock from a young age, his songs work in different musical contexts because at the core of them lies classic songwriting.
Shows:
Prince Albert – 2:00pm Thursday
The Arch – 10:15pm Thursday

MOLLY was founded on a cold foggy November afternoon in 2014 in a little basement amidst the Alps – and so they sound. Their dreamy airiness not only captures the Zeitgeist but also brings something utterly new and unique to the table.
Shows:
Prince Albert – 12:00pm Thursday
Queens Hotel – 8:30pm Friday

HEARTS HEARTS create beautiful, elegiac songs which live at the intersection of contemporary and classical electronic and pop music. Anchored by Österle’s voice and as likely to evoke Sigur Ros as Flying Lotus, their debut album Young is an album about experimentation and observation – literate, sophisticated, but vulnerable and warm. “Certainly one of the most arresting debuts in recent years.” Drowned in Sound
Shows:
Prince Albert – 1:00pm Thursday
Latest Music Bar – 9:00pm Friday

STEAMING SATELLITES from Salzburg are one of the fixtures of the vibrant Austrian music scene. For 10 years they have enthralled indie crowds with their exciting and unique mix of styles. Although deeply rooted in indie rock, Steaming Satellites flirt with blues, funk and soul, and dauntlessly dip into pop territory. Complementing the classic rock formation of guitar, bass and drums with keyboards and synthesizer, they create a universe of sounds that both expands and contracts on an infinite level at full blast.
Shows:
Prince Albert – 3:00pm Thursday
Latest Music Bar – 11:30pm Saturday

Currently residing in Manchester, SALUTE aka Felix Nyajo was born and raised in Vienna. As a teenager he was heavily influenced by UK bass culture and US Hip-Hop/trap culture – citing the likes of Hudson Mohwake, Cashmere Cat and Rustie as influences. His compositions have ranged from hip-hop beats to synth-led electronics that have showcased melodic, energetic and harsh elements to his production work.
Shows: Green Door Store – 12:15am Saturday

MATT BOROFF AT THE ALTERNATIVE ESCAPE

Having just released his album “Grand Delusion” on the 5th May, US-born and Austrian-based songwriter Matt Boroff emanates a pleasantly dark mood from stage. The new song material touches on some difficult themes including nationalism, greed, alienation and most importantly, what it means to be a human being in the modern world. For his album Boroff had worked together with producer Alain Johannes (PJ Harvey) and the likes of Mark Lanegan and Jack Irons (Pearl Jam, RHCP). Read more: The Art of Escapology / Alternative Escape