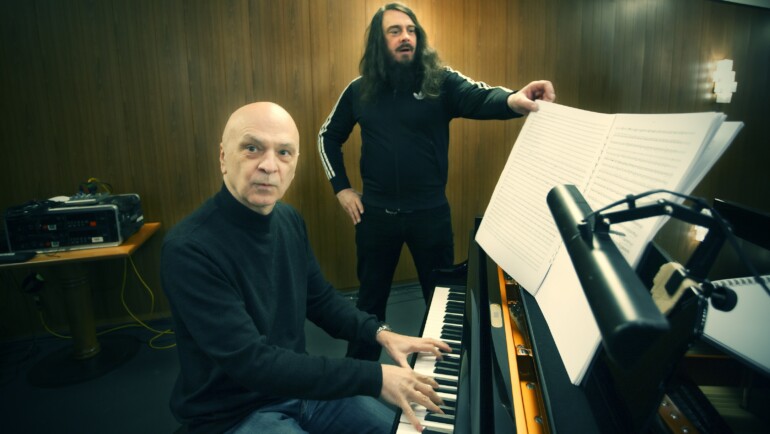 The Upper Austrian composer Bernhard Lang, who made his international breakthrough with his piece “Theater der Wiederholungen”, has written the music and libretto for a new “Parsifal” on behalf of the WIENER FESTWOCHEN. JONATHAN MEESE, SIMONE YOUNG, the KLANGFORUM WIEN and the ARNOLD SCHOENBERG CHOIR make up the artistic Rolls-Royce-team of stage debuts. For the occasion of the premiere of “Mondparsifal Alpha 1-8” Ruth Ranacher spoke to BERNHARD LANG about magical texts, new interpretations, meta-theatre and unknown explosive potential.

Wagner’s “Parsifal” – How does one approach such an iconic piece of cultural history? And how does one deal with time constraints on such an enormous undertaking?

Bernhard Lang: I want to begin with the iconoclastic challenges. When one rewrites an iconic, a sacred, text of western civilisation the greatest initial challenge comes from approaching it with too much respect. Eventually one realises that every rewrite comes from a deep respect for the original. It’s about a new interpretation of the original rather than a destruction of it.

This step into the void gave me the confidence that I could, indeed, approach Wagner.

Bernhard Lang: In 2007 I began writing the “Monadologien”: A series in which I applied a very specific compositional technique. I began to rewrite Strauß, Mozarts Komtur scene from Don Giovanni, and other great works. These rewrites were then abstracted by Viennese meta-film-artists and their found footage works. Martin Arnold, who created new narration and textures with his existing material, deserves special mention here. His editing technique – montage and remontage – provided me with great intellectual inspiration. Musical theatre is most closely related to film, and that’s why my work had to culminate in musical theatre.

The last big step was a 60 minute rewrite of Bruckner’s “Linzer Sinfonie – Das kecke Beserl” which was premiered at the Donaueschinger Musiktage . This step into the void gave me the confidence that I could, indeed, approach Wagner.

Now I came to the second hurdle: the length. At one of the first concept discussions in Berlin Jonathan Meese said that the new work has to be at least as long as the original. This decision was a willful acceptance of the outmoded. So I researched the length of various productions and chose the shortest recording from Pierre Boulez, with 3.5 hours. With this exact time structure I tried to recreate everything scene by scene, and also tried to reconstruct the three acts. The text and Wagner’s entire environment provided the foundation. I first practiced the piano score, parallel to that I rewrote the libretto and continued to compose. Text and music developed simultaneously. I extracted individual text passages, packed them into repeating structures and looped them.

You partially rewrote the text and turned – to quote one of the most prominent passages – the original into a “Salvation of the Saviours”.

Bernhard Lang: I realised that there was the following passage from Nietzsche: “Salvation from the Saviour”. With that he meant Wagner. And that in a time in which he completely turned his back on Wagner’s aesthetic and ideology. I read it differently: “Salvation of the Saviours”. A sentence we all understand very well in this world.

Kundry is portrayed as the Wandering Jew by Wagner; the golem appears every 33 years. How did you approach the interpretation of these figures?

Bernhard Lang:  For me the work on both pieces was a smooth transition, but first on the subject of Kundry: she comes of badly with Wagner. With me Kundry and Parsifal redeem each other. She also doesn’t remain in the subservient role. I did the same with the Golem. The Jew who assists Athanasius Pernath guides him through the insanity. She becomes his figurehead.

But there is another parallel: The archetype of the fool plays an important role in “Golem” [musical theatre by Bernhard Lang]. My “ParZeFool” — that’s the name of my score — is a piece about foolishness. In the medieval literary form “Laus stultitiae — praise of folly” the fool is the wise one. Parsifal is someone who, for me, stands innocently above morality. That gets lost in Wagner, because at the moment that Parsifal becomes the grail king, he is matured and becomes an honourable official. In my interpretation he remains a pure fool. The fools cap connects both pieces.

One of your specialties is the looping of key sentences. What does that look like in your current piece?

Bernhard Lang: That was a conceptual agreement with Jonathan Meese. We asked ourselves how we were going to deal with the many miles of texts. It was clear to the entire team that we would take out important sentences an repeat them and all of the narrative that didn’t take place on stage would be taken out. In “Parsifal” old men with dignified voices narrate what is happen in a very anti-theatrical way. It isn’t easy to be able to get that across on stage in an interesting way. The loop machine replaces the narration.

As far as is known you are using three synthesizers. How can we imagine their use?

Bernhard Lang: The synthesisers are a continuation of Wagner’s “Kunstwerk der Zukunft” (artwork of the future). Meese wants a space opera. In a science fiction opera you need the instruments of the future: synthesisers. Wagner also expanded the spectrum of the orchestra with particularly deep instruments. I took it even deeper an invented a sub-bass synthesiser that is only audible with subwoofers. You actually feel it more than hear it and it is used throughout the entire work.

What was your initial basis of understanding with Jonathan Meese?

Bernhard Lang: We had a photo session in Berlin and I met with Zierhofer-Kin, Jonathan Meese, and his mother in Meese’s atelier. His paintings to “Parsifal” were also there and I found them inspiring. On the one hand because they had such a freshness and luminosity, and then also because all of these paintings had texts and inscriptions painted in. I found many examples of the technique of overwriting pictures. Meese’s paintings were a strong source of inspiration for my composition. Our further work together was concentrated and methodical.

I find the palimpsest technique to be a deconstructive technique. It enables something like a psycho analysis of the original. The second layer of text that one imposes on it is quasi a dialog with the first and can result in exposing a third layer that had been hidden. When things that seemed humorous in the first run, are shown with a certain menace in the second, that is a dialectic principal. It is a pay with reversals and very strongly connected with the definition of interpretation. A text is always in motion and requires a constant reinterpretation.

The programming of this work is also a strong statement by the Wiener Festwochen.

Bernhard Lang: Producing new pieces really is a strong signal from the Wiener Festwochen. In the last years Austria has had a week commitment to the new and experimental. Instead successful external works are purchased. I find the courage great. “Mondparsival 1-8” is something completely different. It’s a bomb with an unknown explosive potential.