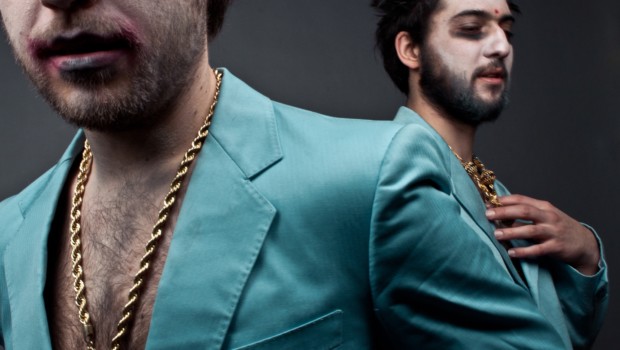 What can you write about a band that can not be pushed into any of the usual musical categories? The witty and whacky duo Koenigleopold flip conventional music concepts inside out and leave no stone unturned. As displayed on the debut EP “Aalfang“, the heads of this project – Leo Riegler (electronics, turntables, vocals, clarinet) and Lukas König (drums, synthesizers) – relieve themselves from pretty much all of the usual musical approaches and stay far away from the traditional, conventional music heard on the radio. Koenigleopold’s madness meets innovation, pointed humor meets creativity, experimentation meets musical finesse, musical theater meets activism, and, and, and…

It’s not like the popular Austrian radio station FM4 does not ever play the somewhat more oblique tracks, but it is a little surprising that the editorial staff apparently found a new favorite band in Koenigleopold. With the regular airplay of the song  “Kohlhauser”, Koenigleopold definitely gained a lot of attention in the German-speaking realm.

Admitted, you have to grin when you listen to the songs of Leo Riegler and Lukas König,  but it is not just about a fun project. Those who already know the work of the two musicians, know that the two are acclaimed experts in the field of jazz. Quite active in the surroundings of the Jazzwerkstatt Wien, they always have a tendency to tread new  sonic paths in their numerous projects. As Koenigleopold, the duo uses the opportunity to lash out of the ordinary and explore new musical boundaries.

The sound that Leo Riegler and Lukas König celebrate can not be questioned in terms of stylistic categories. In the best crossover manner possible, the two throw elements of electronic music, hip hop, pop, rock, noise, improvisation and avant-garde all in one pot and keep stirring hard. Garnished with a good portion of madness, Koenigleopold creates unique groovy pieces that can not be heard elsewhere.

With Koenigleopold, Leo Riegler and Lukas König impressively demonstrate that it is still possible to create new, unusual and exceptional music once you release yourself from old conventions and let your creativity run wild.
Michael Ternai
(translated from German)