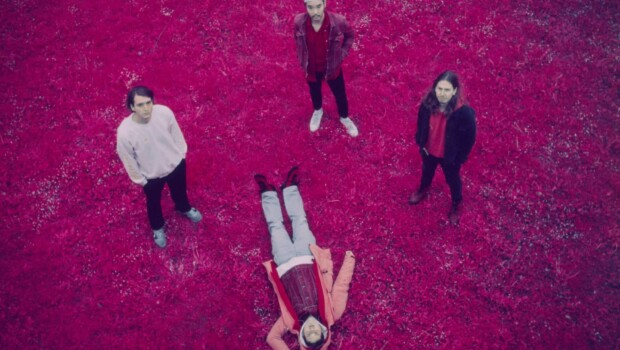 You describe your new album “Funland” as an “attempt to describe the tragic impact of an earthly existence” – what do you mean by that exactly?

The sound on the album is extremely atmospheric and also noisy, nevertheless one hears catchy pop melodies out. How would you describe your music to someone who doesn’t know you?

Moritz Rauter: Our producer Axl Vers once put the sound categorization in a nutshell: “Indie Metal”. Milo Bauer from House Of Pain on FM4, on the other hand, thinks it’s “Dream Pop”. Many people also call our music “shoegaze”, although we have never explicitly seen it that way ourselves. The truth lies somewhere in between. But we have a hard time with the “genre-tossing” at all. All four of us grew up in a similar way and grunge played just as important a role as death metal. It’s also fun to play such different styles – in this sense you can call it “funland music”. During the making of the new album, we were influenced by bands like Guns n’ Roses, Metallica, Blink-182, Nirvana, Foo Fighters, My Ugly Clementine, The Smashing Pumpkins, Weezer, Sparklehorse, Nothing, Deafheaven and the Righteous Pigs.

Did the working process for “Funland” differ compared to your debut album?

Moritz Rauter: Our debut album “Frail” was a complete DIY process – not completely dissimilar to what we are doing now with “Funland”. Starting with songwriting, arranging, writing lyrics, recording, mixing, designing the cover, shooting the videos, promo & PR, we did everything ourselves. The new record was mixed and partly co-produced by our good old friend Axl, the rest is also pure DIY. We book shows ourselves, do merchandising and also the whole social media thing. This often drives us completely insane, but the passion for the cause itself is greater than any insanity.

How did you come together as a band in the current line-up?

Moritz Rauter: I’ve known Dongsu since 2004. We went together to the anarcho-pubs and parks in Klagenfurt and have somehow always made music together. My brother Max has always played bass and Leon is Axl’s brother. So it all kind of came about as a logical consequence.

“We have a soft spot for formulating lyrics in such a way that they often read as cryptic or mysterious.”

Do your songs predominantly come into being while jamming together or does one of you come to the rehearsal room with a finished idea and you then work with it?

Moritz Rauter: First and foremost, Dongsu writes the songs. But often, there is no real basic structure, and we arrange and produce the song together. The jamming thing has kind of stopped by now. Jam sessions are fun in principle, but for us they end at the latest when everyone feels and notices that there is a common musical understanding. But when we go into the studio or the rehearsal room to make a record or to write songs, then we are all in a certain workflow and already have certain ideas.

The lyrics to your songs seem very mysterious. Where do the inspirations for that come from?

Moritz Rauter: We certainly have a soft spot for formulating lyrics in such a way that they often read as cryptic or mysterious. We like subtle contradiction and love the penchant for drama. We also have strong political and socio-critical convictions, which also become clear on closer examination. But, mostly, it’s about existence, love, loss, and hope.

Does your song “Shinitching” refer to a real existing syndrome or is it mainly meant as a metaphor?

Moritz Rauter: We have diagnosed ourselves – seriously, no joke – “shinitching” and we wouldn’t wish it on anyone.

If you could choose any movie in film history to do the soundtrack to – which movie would it be?

Moritz Rauter: The film “Revanche” by Götz Spielmann is almost completely without a soundtrack. That’s why we already thought that we would have the right sounds for his pictures and we would be ready for a remake or a second part. And should Park Chan-wook send his Oh Dae-su [note: fictional character from the South Korean film “Oldboy” (2003)] on a journey again, then we would also like to accompany this event musically.