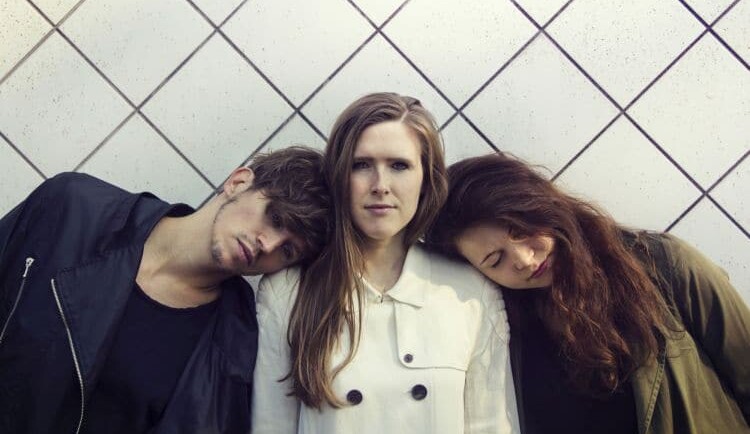 “KAOS” (Seayou Records) is the first album of the band VIVIN, but the third album ADA JOACHIMSTHALER, FRANZISKA KLEINSCHMIDT and HELE MAURER have recorded together. They were previously known under the name of GIANTREE, a familiar name for indie listeners in Austria. With “KAOS”, however, the three of them leave behind their guitars and exchange them for synthesizers. In a conversation with Benji Agostini they talked about the transition between the two projects, the actual chaos behind their album and which topics they were particularly interested in.

How did the transition between Giantree and VIVIN go?

Hele Maurer: We recorded the second Giantree record in 2016 and after that we needed a break.

Ada Joachimsthaler: We only slowly found together afterwards. The three of us simply met again to jam in a rehearsal room. We noticed that we missed it a lot, but everyone had a job. It was the cut between student life and professional life. We couldn’t spend the whole day in the rehearsal room anymore, so we had to reorganize.

Franziska Kleinschmidt: Everyone also brought different contacts with them. I brought the old drummer and Ada Thomas Vogelreiter, who was ready to go and record our single.

Some elements from Giantree are still present in VIVIN and some are new. Was this a conscious decision?

Ada Joachimsthaler: No, not really. When we met again after the band break, it was only slowly that we started doing something again. Same with the songs. At some point we said: “The new song sounds cool, don’t we want to try to release it?” By then we were already right back where we used to be.

“WE HAVE SET NO BOUNDARIES FOR OURSELVES.”

Looking at your press release, it seems as if you are working very conceptually. Was the concept of “KAOS” there from the beginning or did it come about as a result of your work?

Ada Joachimsthaler: It evolved out of the chaos. It’s amazing how some things make sense in retrospect. We really work into the chaos and that’s a good title for our work. We went into it without a precise plan and goal. We no longer had the pressure to succeed that we felt after the second Giantree album. That was also liberating when it came to songwriting. We have set no boundaries for ourselves. Everyone gets to try out every instrument.

Franziska Kleinschmidt: It was also chaos because there were only three of us at the beginning and we had no drummer. We had to improvise while writing the beats. Because the guitars were gone, we now have more electronic elements in our songs that are new to us. Then in the midst of everything the drummer changed and there were several producers involved. Therefore it was a very colourful phase of development. We also don’t have a fix songwriter. Everyone contributes ideas and if they’re good, we build on them.

Do you mean “idea” in the sense of “musical theme”?

Franziska Kleinschmidt: Exactly. It usually starts with an effect or a riff. Ada then finds the fitting chords and melody within five minutes.

Hele Maurer: And the text.

Hele Maurer: But we definitely approached the songs without a concept. For the album we worked song for song. After we had finished about three quarters of the album, the song “Kaos” added the title for the album.

Franziska Kleinschmidt: I used the “Kaossliator” from KORG for the song “Kaos”, that’s why it is “Kaos” with a K. That was the working title for a while, but then it just fit content-wise. It is usually best to start with a concept in mind, but in the end that was the concept of the final product. If you have chaos, then there can’t really be a concept, because otherwise there wouldn’t be chaos.

Ada Joachimsthaler: The lyrics were also written during the rehearsals. They were smeared on a piece of paper, really just straight from the soul. We didn’t think much about what was on our mind, it was more of an “I just sing it from within”.

This means, however, that you are at least subconsciously preoccupied with the topics.

Franziska Kleinschmidt: Definitely. And it fit thematically. I think it’s most authentic when it’s something that is a result of doing. Without having to browse through the newspaper and look for current topics in order to create a song.

Ada Joachimsthaler: Probably the music. I also notice that I feel really good when I go to the countryside and am just surrounded by green, even though I love the city.

“DEPRESSION IS A BIG ISSUE IN OUR TIME.”

So you have a rather positive approach.

Ada Joachimsthaler: Yes, but in the song I treated it differently. Of course, it all plays together with how you present yourself to the outside world, when you realize that so much is faked and you ask yourself whether your friends are still serious about it or how you can perceive your outside world. Or is it enough for you and you don’t want to go out at all. The topic of depression also plays a role. If you think: “Enough, I can’t see colours anymore, I see everything in black and white and want to switch off”. But you can basically think about whether seeing colors is real or not. Can you only see the colors on the screen, like in the song “Chromatics”, or can you also see the colors when you go out and experience life?

Hele Maurer: Depression is a big issue in our time. I was born in 1980, so it’s getting too much for me to be everywhere all the time. Especially through social media, something like this is amplified. We are all self-employed, (in German “selbstständig”) that contains the word ständig (constantly) and also as a musician you have to be constantly up to date. I have now also noticed that I have to go to the countryside.

Franziska Kleinschmidt: Back to the roots.

Hele Maurer: Yes, that’s definitely the solution for everything: back to the roots and slow down. That should not be confused with laziness. But I could also imagine going on tour for weeks as an escape from reality.

Do you also write the lyrics as a form of catharsis?

Ada Joachimsthaler: Absolutely. We write down our worries here. That’s why these are topics that are coming from our hearts. When we wrote “Skip the Beat”, the refugee crisis was a current topic. Unfortunately not much has improved and the song is still up to date.

One feature of your new album is that you switch instruments over and over again. Do you also use instruments you don’t know how to play?

Franziska Kleinschmidt: We have always changed up the keyboard instruments.

Hele Maurer: Yes, when Franziska changes from bass to synth bass, for example.

Franziska Kleinschmidt: With the sample-pad, for example, you can quickly create beats even though none of us really plays the drums. When playing live we sometimes have two people playing the piano together at the same time, and then we change again. But it’s not as stressful as it sounds.

Ada Joachimsthaler: That sounds like Arcade Fire right now, but they have a few more people than we do.

Franziska Kleinschmidt: This didn’t come about for conceptual reasons either, but more from need. If I couldn’t remember a riff, I asked someone else to play it. It also has pragmatic reasons.

Do you think that’s how you came up with ideas you wouldn’t have had otherwise?

Franziska Kleinschmidt: Yes, definitely. During the writing process we it as an expedient. It all started when we thought to ourselves: “We are not enough people, we have to take turns”. But then we discovered that Ada and I could play the intro with four hands. That’s how new ideas came to be.

Ada Joachimsthaler: During production, we kept adding new parts and only then thought about ways of implementing them live.

Hele Maurer: Our two drummers and producers were always involved.

Ada Joachimsthaler: But during production we noticed that we could not let someone else do the production alone. For Giantree we always did it ourselves and now even though we have had producers with us we realized that we always had to be there and tell them exactly how we want it done.

Hele Maurer: We mainly had to give up the technical part.

“IF WE WERE TO LIST ALL THE BANDS THAT INFLUENCE US, I’D HAVE TO WRITE DOWN MY WHOLE SPOTIFY LIBRARY.”

Did you purposely get inspiration from somewhere?

Hele Maurer: It developed from so many different sources. We’ve been making music together since 2011 and at that time the indie-electro wave was big, with bands like The Naked And Famous shaping the sound of Giantree. Traces of that can still be found in our songs.

Franziska Kleinschmidt: Of course, there will be a lot bands. If we were to list all the bands that influence us, then I would have to write down my entire Spotify library.

Are you trying to gain a foothold abroad?

Hele Maurer: We’re lucky that Seayou Records also promotes abroad. First and foremost in Germany, but we also have airplay in Britain, the United States, France, Switzerland and Russia. Of course it would be a dream to also play concerts there, but you have to be able to finance it first. And you have to find the right booking partner.