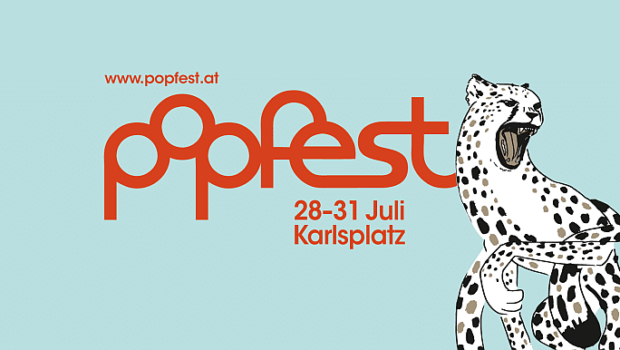 Vienna (OTS) – “In recent years, Vienna’s Pop scene has caught up with those in comparable cities without losing the distinctive flavor of local music despite international commercialisation. This is proven by the track record of the Vienna Popfest here in the city center, as well as the demand for performances of local bands abroad. Vienna has always been fertile ground for innovative pop music. A tradition that the Popfest picks up on and furthers. And thus the classical city can begin to see itself as a city of pop”. With these words the Executive City Councillor for Cultural Affairs of the City of Vienna Andreas Mailath-Pokorny opened the program presentation of the 7th Popfest Wien in the Wien Museum.

“Open-air stages and venues in the artistic and cultural houses at the Popfest once again tranform the Karlsplatz into a pulsating festival site. In the program line-up itself one can find subtle connections between different domestic pop scenes,” adds festival director Christoph Möderndorfer. “Collective Grand Projects”, in particular the spectacular opening show by the 55-member MusikarbeiterInnenkapelle (Music Workers Band) or the final orchestral performances by Black Palms Orchestra and Johann Sebastian Bass in the Karlskirche try to set new standards here this year.

The opulent and imaginative 7th Popfest program was curated by the singer Ankathie Koi (Fijuka) and the journalist and music expert Gerhard Stöger (Falter, WienPop). According to Koi/Stöger: “With our program we try to reflect this quality in a multifaceted yet coherent way and to include as many acts as possible that have not yet played Popfest. Our program is designed like a Wildstyle DJ set or a mixtape, in which one song grows into another. Compared to the last three years, the electronic component at Popfest has been slightly reduced, while we have placed a somewhat stronger emphasis on guitar music again. ”

The most hyped songwriter of the day is Voodoo Jürgens, and he will open the “Lakestage” in front of the baroque St. Charles Church. He will be bringing his hit „Heite grob ma Tote aus“ along with him. With drums and especially trumpets the MusikarbeiterInnenkapelle will be blowing through a fast-paced program of new interpretations of songs from the Hit Parade to the Great Austrian Songbook. Numerous surprise guest stars will be joining them on stage. And finally the internationally successful White Miles will be blasting the stage with their ecstatic stoner rock.

11 OPEN-AIR CONCERTS AND AN ORCHESTRAL POP FINALE IN KARLSKIRCHE

There will be a total of eleven “major” concerts on the “Lake-stage”in front of the Karlskirche featuring progressive pop acts like ROBB, Dawa, Leyya and Ogris Debris as well as small open-air concerts at the Red Bull Brandwagen. As in the past, at night the Popfest will once again fill the art and cultural buildings around Karlsplatz with contemporary pop as well.

The Brut at Künstlerhaus will be hosting nine live programs at this years Popfest. Highlights include performances by FM4 Amadeus winner Schmieds Puls, the solo project of Ja, Panik-singer Andreas Spechtl, Sleep, as well as The Trojan Horse and their inflaming discourse-pop. And then there is the perhaps craziest entertainer of the Austrian pop business; Lukas Koenig aka KOENIG.

The Wien Museum is once again transformed into an atmospheric venue for innovative song projects from Raphael Sas, Grant, and Musser & Schwamberger. The University of Technology is dedicated to rock with perfromances from Ash My Love, Thirsty Eyes, and Wild Evel & The Trashbones as well as some more aritifficial pop designs of Hearts Hearts, Chick Quest, Vague, and Powernerd.

The Popfest final on Sunday will once again fill the hallowed halls of the baroque Karlskirche. This time with two major pop music projects: Christian Fuchs’ Black Palms Orchestra opens the show, and the Popfest curtain will close after the opulent appearance of Johann Sebastian Bass Chamber Orchestra (31.7.).

The Popfest Sessions will open on Saturday morning for the first time with a well-stocked vinyl record-fair full of local music rarities. Following that will be a series of expert talks about the vinyl revival, music licensing in film and the precariat in pop business. Andrea von Förster (Music Supervisor, USA) and Jesper Gadeberg (MusicStylist.com, DK) will talk about licensing music for commercials, movies, short fictions or theater.
The panels on Sunday draw the bridge of domestic pop music between politics (Robert Rotifer asks “Which side are you on?”) and glamour ( “30 Years of Rock Me Amadeus”). Moderated by Gerhard Stöger this panel features well-known participants including Edek Bartz, Thomas Rabitsch and Falco producer Markus Spiegel.

This year Popfest curators Ankathie Koi and Gerhard Stöger have invited all their predecessors to take part in a DJ line at the Heuer/Kunsthalle Café. The lineup? “We look forward to Susanne Kirchmayr, Stefan Trischler, Violetta Parisini, Wolfgang Schlögl, Patrick Pulsinger and last but not least Robert Rotifer!”