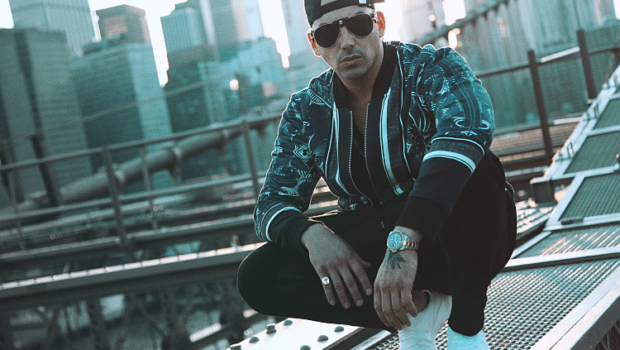 He had to go to Berlin. At home in Vienna Fünfhaus there was no future for hip hop. In 2017 only Ed Sheeran was streamed more often in Germany. Thefuc how?

Bonez is primo, Raf was lucky, envy is a bitch and usually Viennese. Because last year was definitely the year of Raf Camora, Bonez MC and their album. But because no one at home wants to believe that the exile Viennese Raf Camora has managed to do it himself, excuses have to be made. Like the fact that everyone could agree that Bonez MC from the 187 Strassenbande would have been the sound of the hour anyway. He was responsible for all the clicks that “Palmen aus Plastik”  (“plastic palms”) earned. The song currently has 72 million views on Youtube and 56 million plays on Spotify.

The song “Ohne mein Team” (“without my team”) has even more amazing numbers. At the beginning of 2017 almost everyone was able to sing along in the Marxhallen in Vienna. But how are we supposed to believe that an Austrian citizen could succeed abroad? All of a sudden people are crawling out of the woodwork who knew Raf from the beginning, how he struggled, how he wanted to connect everywhere, how he tried it and never quite succeeded. This never quite succeeding was very relative.

Actually, it was downright wrong. Even before the album with Bonez. His album “Hoch 2” was number one in Germany. Ok it was during the summer slump four years ago, but still. In this millennium, only Hinterseer and Stürmer succeeded in doing this. He was nominated for the Echo and won an Amadeus. His album “Artkore” with Nazar is legendary in Austrian rap. Fans continue to call for new edition in vain. Both artists remain silent on why the fell out with each other. He recorded the scandalously underestimated “Zodiak” together with two other exiled Austrians in Berlin, Chakuza and Joshi Mizu. And not too many people manage to reach the top three in Germany with an album anyway. But he did with “Ghøst” in April 2016.

HE DID IT HIS WAY

But somehow none of that matters to the people in Austria. He wasn’t even ignored. Raf didn’t fit into the broadcasting scheme of the radio stations and didn’t let himself be called “our boy” by the media. He spent his first six years in Switzerland, then he came to Vienna Fünfhaus and moved on to Berlin ten years ago, because there was no prospect at all for Hip Hop in this country. While the media hyped Wanda, Bilderbuch and the rest of them, he flew under the radar . And unfortunately, it is a simple truth that Austrian media are unfamiliar with rap and choose to ignore it. Except for The Message, FM4, Noisey and The Gap. You can’t sell soft-drinks with it and doesn’t really offer politicians any easy photo-ops.

“Fuck ORF and its mother. 10 years of being ignored, yes of course it hurts me brother”. “Vienna” is such a colossal song it is hard to understand why “Vienna” hasn’t been the official anthem of this city for a long time. He opens his second song on “Anthrazit” with “I’m a West Viennese”, dropping a mic at the feet of all his sceptics. Raf bought another apartment in Vienna. He keeps writing about his love for the city – and how it rejected him. “Piss from West-Vienna directly into your noble districts”, he raps in “Alles probiert”(tried everything). In the video he is high up, looking down on the town hall, the parliament and the city.

THE SOUND OF THE STREETS (OF VIENNA)

Last month he released another album. Free of charge and just for the fans. The single “Gotham City” is an homage to Vienna Fünfhaus, the video is high art, in which little boys, soccer cages, sneakers, synths, underground stations designed by Otto Wagner, garages, drifts, hard men with boxing gloves and pistols are cut against each other at breakneck speed. You see a lot of testosterone, lots of swagger and a lot of enthusiasm. This is music from the street, it depicts something that is not shown elsewhere, it celebrates everyday life behind the Gürtel, its people and its language. And it got two million views in a week. Neither Voodoo, Seiler, Pizzera, or Gabalier have achieved that. Raf Camora is the most streamed German-speaking artist in 2017. 323 million plays on Spotify in Germany. The only one with more is Ed Sheeran.

It’s time to finally acknowledge that. Please insert strong language here. Raf Camora didn’t do it by imitating Bushido, Fler or Haftbefehl. No, he experimented with dancehall, reggae and afro trap. Speaking to the Bayrischer Rundfunk he said at the beginning of the year: “I’ve been incorporating dancehall into my music since 2008, but I’ve never been consistent enough. You always dare to be a little bit more in twos”. What used to sound a bit rough before, now seems like a unified whole.

FROM THE BOTTOM TO THE TOP

His flow is quite unique in German rap. As a child ravens were ever-present and he used to imitate their sounds so he chose a raven as his trademark. Raf has something to say, too. He used to steal bicycles and sell a little weed, was on the dole and played in front of empty halls. He didn’t give up and ended up making it. Raf Camora doesn’t say you will make it, but he shows you that even if the way to the top is tough, there is one.

Raf Camora is currently the most relevant musician in this country. Others have sold more albums. Many fill larger halls and larger festivals. Some get on more annual best-of lists. And of course, others also make respectable music. But art isn’t a race to the top or to the wallets of young fans. But Raf Camora does it all at the highest level, he goes platinum, he sells-out the Gasometer, he sets records at Spotify, he nails the language and he meets above all a certain feeling for life. If he didn’t the impressive figures wouldn’t matter and would not be possible. A little less stress with the police, some sex, driving around with the boys, knowing where you come from and finding a better life. There are actually people out there for whom that counts the most.

Raf Camora has released the album “Anthrazit” and the free album “Anthrazit RR” in 2017. He played live with Bonez MC on December 22 and 23 at the Wiener Gasometer. He sold out both dates. In 2018 they will both perform at the Frequency Festival.