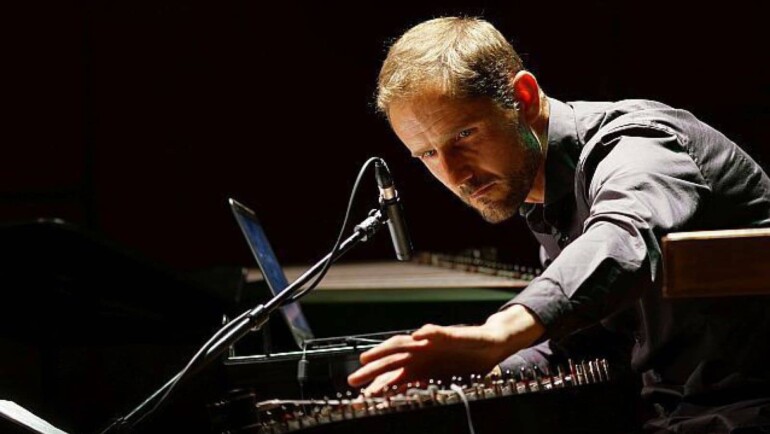 Tyrolean zither virtuoso and botanist MARTIN MALLAUN has been addicted to the beauty of microtonal tunings for years. In early February he played a concert in Stuttgart with his zither trio GREIFER, together with Reinhilde Gamper and Leopold Hurt, as part of the ECLAT Festival 2021. Recently, the searching and adventurous musician released a beguiling, haunting collection of ancient as well as brand new sounds on the Viennese label loewenhertz. The title of the album is short and concise: “Stimmungen”. In an interview with Michael Franz Woels, MARTIN MALLAUN reveals in which places he can experience changes in nature at close range, when he first had delved into the world of overtone series for months and how the otherworldly, nightmarish world of Alfred Kubin can be „zithed”.

You are not only a musician, but also a biologist. Since 2001, you have been studying the effects of climate change on the vegetation of alpine ecosystems as part of the “GLORIA” research project. Can you briefly explain your field of activity? Has your knowledge as a biologist affected your way of making music?

Martin Mallaun: At a concert I played in London a few years ago, the presenter Michael White began his introduction with “Martin Mallaun has a certain mess in his biography …“. That sums it up quite well, as in recent years I have often been torn between botany and my main occupation, music. During the summer months I am mapping and doing research for various institutions. Most important to me is the “GLORIA” project, an international network of biologists who are studying, based on a set protocol, plant diversity in the high mountains and how it is being altered due to climate change. In concrete terms, this means that we usually spend a few weeks in tents up in the mountains in summer, surveying plant life on permanent study plots. This is very beautiful work, and also impressive, because we are experiencing the rapid changes in nature at close range. This work has actually had no effect on the music, except that it is really “healthy” to get away from one’s work now and then.

Your current album is called “Stimmungen” You write that, from a music-historical point of view, the tuning system that divides the octave into twelve equal semitone steps could rather “be considered a passing fancy.” Can you still remember your key experience in the field of microtonal tunings?

Martin Mallaun: I have been working with alternative tuning systems for almost twenty years – the zither is really predestined for microtonality. Particularly impressive was my involvement in the opera “Thomas” by Georg Friedrich Haas in 2014. The zither score in this work is a real monster: over 120 pages of zither notes, played on three zithers that are completely retuned according to different overtone series. For this project, I delved into a world of overtone series for several months – a fantastic listening experience! After that, I had real problems with equal temperament for a while, everything sounded wrong.

The current album too does not present equal-tempered, but alternative tunings on the zither. Your experimental zither maker Klemens Kleitsch developed an electric zither and a so-called “Cetra Nova” with a mean-tone fingerboard for you – the first of its kind worldwide. How did you get to know each other, how did your collaboration come about?

Martin Mallaun: More has happened in zither making over the last twenty years than in almost 200 years before. Especially Klemens Kleitsch, a builder of harpsichords by profession, revolutionized the sound and construction of the zither. Most of what is now happening in the field of new music on the zither would be inconceivable without his work. The initiative for these innovations came from Georg Glasl who teaches the zither at the Musikhochschule in Munich and has been working with Klemens for a long time. So I already had access to these great instruments, like the e-zither or the Cetra Nova, a zither with a very thin top and greatly reduced string tension. For my project “Stimmungen”, Klemens Kleitsch further developed his Cetra Nova by building a fingerboard with mean-tone temperament. This is the tuning that was mainly used in the period between 1500 and about 1650. It is hard to believe how much such a modified tuning system changes the whole sound of an instrument!

“EVEN IN EARLY MUSIC THERE HAVE BEEN TRULY UTOPIAN DESIGNS”

The choice of a scordatura, a special tuning system, has become a parameter over which composers have free rein. In 1920, for example, the Czech composer and music theorist Alois Hába was one of the first to rebel against the “prevailing order”, writing quarter-tone pieces; you also quote Arnold Schoenberg in the booklet with “that compromise called the tempered system, which represents a truce concluded for an indefinite period.” What other historically interesting or bizarre examples of unusual scordaturas have you come across in your artistic research?

Martin Mallaun: For me, one of the most beautiful and peculiar examples still is the music of Harry Partch with its “just intonation”. Unfortunately, he insisted on making his own instruments instead of composing for the zither. In his piece “partch zither”, the Hamburg composer Manfred Stahnke attempted to transfer this sound world to the zither. But there were also truly utopian designs in early music. The problem of the mean-tone temperament was that many intervals sounded bad and therefore could not be used. Therefore harpsichord builders developed instruments with divided keys – for example E-flat/D-sharp and G-sharp/A-flat – just like on my zither. The Italian Nicola Vicentino took this to the extreme and built the Archicembalo, a harpsichord with 24 keys per octave!

“Differenz/Wiederholung 10a”, the opening piece of the album “Stimmungen”, is by Bernhard Lang. It is among the pieces in the series “Differenz/Wiederholung” – based on the philosophy of Gilles Deleuze – and was originally conceived as a double composition for koto, a Japanese arched zither, which originally has no tempered tuning. Your interpretation also uses sampling. Can you elaborate a bit on this aspect?

Martin Mallaun: As the title suggests, this piece is part of the series of pieces “Differenz/Wiederholung” that reflect on the theme of musical repetitions. The purpose being a kind of phenomenological exploration of repetition in the variety of its differentiations. While in the first pieces of the series the loops were always played or sung, sampling in a technical sense found its way into the latter ones, as in “DW 10a”. For this purpose, Bernhard Lang, together with Thomas Musil from the Institute for Electronic Music and Acoustics (IEM) at the kug in Graz, created the loop generator “looping tom” that enables repetition in the piece. The e-zither is connected to the computer via an interface, and what has just been played is processed electronically and blends in with the live sound.

“WHEN ONE IS HEARING MICROTONALITY TODAY, MOST PEOPLE THINK OF CONTEMPORARY MUSIC”

The piece by Bernhard Lang is followed by three lute pieces from the English Renaissance by John Dowland. Why did you choose two galliards, French dance pieces?

Martin Mallaun: When one is hearing “microtonality” today, most people think of contemporary music. Yet there was no such thing as equal temperament in early music either. In the period before 1800, a wide variety of tuning systems were used, each with its own world of sounds. So I wanted to juxtapose new and old music without twelve-tone equal temperament – by far the most common tuning system used in Western classical music today. I have been interested in the music of John Dowland since my student days, yet the historical temperament gave me a completely new perspective on it. The tension between dissonance and resolution becomes much stronger, everything appears to be richer, more organic and colorful.

A contemporary piece by the American William Dougherty, a composition for mean-tone zither and sinusoidal tones entitled “Traum im Traum,” is also on the album. Can you interpret this dream within a dream for us?

Martin Mallaun: William Dougherty wrote “Traum im Traum” for a performance at the 4020 Festival in Linz. The theme of the festival and of the piece was Alfred Kubin’s 1909 surrealist novel “Die andere Seite” (“The Other Side”),” a phantasmagorical book about a dream realm caught in a never-ending cycle of stagnation, repetition and dizzying bureaucracy. “Traum im Traum” is Dougherty’s evocation of such a world in the sound of the Cetra Nova: this zither is tuned in mean-tone temperament and has microtonal pitches that can not be created in twelve-tone equal temperament. In “Traum im Traum,” he used the otherworldliness of microtonal harmonies available to the Cetra Nova in combination with subtle-sounding sinusoidal tones to evoke in sound the twisted, nightmarish world of Kubin’s novel “Die andere Seite” – a world that seems idyllic on its surface but is actually trapped in a maddening void.

“AS AN INTERPRETER YOU ARE CAUGHT IN A MAELSTROM”

You have chosen little known miniatures for the lute by the cathedral organist and master of Dutch vocal polyphony Jan Pieterszoon Sweelinck as further examples from the Renaissance, or rather the early Baroque. Lute compositions, some of which have never been recorded on CD before …

Martin Mallaun: In addition to the high quality of these pieces, I was particularly interested in the appeal of the unknown. Sweelinck is most famous for his great vocal music and his work for keyboard instruments. The lute, on the other hand, played a minor role for him. Sweelinck biographer Frits Noske, however, assumed that the composer owned a lute and composed these works for his leisure hours. Unfortunately, only seven of them have survived unto our time and can be reliably attributed to him: three psalm settings in “Thysius Lute Book” and four dance movements in “Lute Book of Edward,” both being manuscripts. The psalm settings in particular are immensely attractive examples of Sweelinck’s figurative art and counterpoint. It is all the more surprising that these wonderful miniatures are that little known to this day.

You are searching intensively to expand the repertoire for the zither. The album’s closing piece “graben/wischen/Feder” by Austrian composer and sound artist Marco Döttlinger is an intense, abstract-bluesy “bottleneck” piece. An apparently deconstructed shuffle rhythm is being repeated and continuously densified until it finally “takes off” in the end – by far the jazziest piece on the album. How would you describe the raw charm of the piece?

Martin Mallaun: Marco Döttlinger’s zither piece starts in a very spartan way with the slow repetition of a single note and continuously densifies over the course of ten minutes into a true wall of sound. As a performer, you get caught in a maelstrom that pulls you deeper and deeper into it as time goes by. At the end, the whole thing is so dense that it hardly can be mastered in terms of playing technique, yet at the same time you have the feeling that this whole “madness” is leading to a kind of standstill without any development.