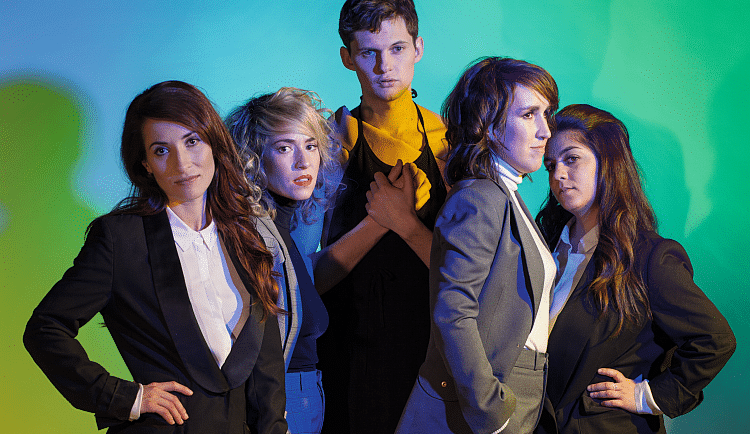 ALMA has been in existence since autumn 2011 and has meanwhile become one of the most successful world music bands in Austria. This summer the band released their new album “Oeo” (col legno). In an interview with Jürgen Plank, JULIA LACHERSTORFER and MATTEO HAITZMANN talked about traditional folk music and their own compositions, and about how yodelling can open hearts across the planet.

You have been with Alma from the very beginning: how did the band get started?

Matteo Haitzmann: At that time I was very young, I was 21 years old. I was traveling a lot before that. After I came back to Vienna, Julia asked me if I would like to play. Since we have known each other for a long time and I knew – or probably felt – that we had a similar approach, it was clear to me very quickly that I wanted to be a part of it.

Starting a band is a special moment, what was it like for you?

Matteo Haitzmann: Yes, that was interesting, because the others had already had much more band experience and played a lot more with each other. I, and all of us actually, just sort of slipped into this formation. We already knew each other, but the contact wasn’t that intense before. I can remember I was excited, I was very nervous.

Are you still nervous?

Matteo Haitzmann: No, not anymore. I believe that this is the first thing we have taught each other, and this is also the most important thing in an ensemble: that we can trust each other artistically and personally.

“THE IMPRESSION I HAVE OF THE CURRENT ALBUM HAS CHANGED FIVE TIMES SINCE IT WAS RELEASED.”

Most bands say that their current CD is the best. How do you view your new CD “Oeo”?

Julia Lacherstorfer: This is a very difficult question. I think that a lot of artists aren’t able to listen to their recordings anymore after they are released. With us, the pieces evolve very quickly. They are recorded six months or even a whole year before the show. At that time the pieces are quite new and then they are played regularly at concerts, which improves them. The impression I have of the current album has certainly changed five times since the release.

Can you please still try to make an assessment?

Julia Lacherstorfer: Regarding the music selection and our compositions, I definitely think that the album is a continuous development. So maybe the third one is the best album. I have to say that all of our albums have their qualities. The first was less focused on precision, but we still feel that it is fresh, energetic, and is experimental.

In the Liner Notes, author Valerie Fritsch describes your music as “Ohrkino” (cinema for the ears). How well did she hit that?

Matteo Haitzmann: She really hit the nail on the head. It’s really amazing. We met her at an Ö1 event, a literature event. She has heard us play, but at a regular concert we always try to create acoustic imagery. We try to give the audience instructions on how to listen to the music and ask them to imagine something.

Why do you do that at concerts?

Matteo Haitzmann: Firstly, it makes the difficult passages in the music easier to understand. Secondly, I am often lost at concerts, including classical concerts. I would like to have more information on the pieces. For example, from composers who have already died, on the period of their lives in which they have written a piece. That’s what we always do. We provide pictures and explain what we were thinking when we wrote the pieces. Valerie Fritsch wrote this about us in her text, without ever experiencing it that way, and that is really great.

In addition, the booklet on page 1 says: “[…] somewhere between planet earth and the dark of space” What do you think?

Julia Lacherstorfer: I find it significant and it’s quite a coincidence that she wrote this beautiful, poetic line because I think our album is about places of longing. At the end there is a beautiful piece from Matteo, which is about a fictional resort and also a little bit about outer space. Valerie Fritsch didn’t know that, but she obviously sensed it.

You composed the piece that describes, “Unknown Peace”: How did you come up with this image of a woman looking up at the stars?

Matteo Haitzmann: I felt the need to write something “self-healing” for myself. To process moments of despair. The woman with the wine glass reminds me of home. I know this well from my family, we sit on the balcony or in the garden drinking wine in the evening and looking up at the the sky. This woman with the wine glass on the balcony reminds me of home.

“Oeo” consists of original pieces as well as traditional pieces which you have newly arranged. How did you choose the pieces?

Julia Lacherstorfer: Last summer we spent ten days at the DAVOS FESTIVAL in Switzerland and spent that time reviewing material. Everyone brought their own compositions as well as traditional music. This combination is always important to us in order not to lose the connection to our roots. A  Landler focus has emerged in the traditional pieces,.

You have already played in Scandinavia, what are the reactions to an Austrian alpine band like there?

Julia Lacherstorfer: That always works wonderfully. Especially in other countries, we could only play traditional music for an entire evening and the people would be completely happy. The enthusiasm is always enormous, because our folk music is really appreciated by the audience. And yodeling is a language that works without any barriers.

Even in South America?

Julia Lacherstorfer: Yes, also in South America. I really do feel that our yodelling tradition gives us direct access to the hearts of all sections of the population. Even more abroad than in Austria, because we still face a lot of rejection here.

“IT’ S PERFECTLY LOGICAL FOR ME TO DEAL WITH WHERE YOU COME FROM ARTISTICALLY.”

What is the attraction for you to rearrange and interpret a traditional folk music piece?

Matteo Haitzmann: No matter what you work with, the more deeply rooted and the longer something has been around: older pieces develop their own intensity when you work with them. A traditional gives a lot and you grew up with it, not only with the melody but also with the feeling, with the country. It’s all part of it. So you have a relatively clear idea of what you could do. You don’t have to search as long as with a jazz standard. For me, it’s perfectly logical to deal with the question of where you come from artistically. Even though I am thinking about moving somewhere else, I think to myself, “There are probably no people there with whom I can play with”. Just as other people might worry about the language barrier, I often think: “Nobody can play a waltz with me like I’m used to”.

Couldn’t you take the music with you and establish it elsewhere?

Matteo Haitzmann: Yes, but it’s about sitting together and the memories and feelings you associate with music. This is such a sincere pleasure. Everyone is happy and wants to play. Of course, this is also possible elsewhere and I think that everyone can learn timing, but first you have to find a violin and a double bass and I think it’s not that easy.

Julia Lacherstorfer: It’s also about feeling your own traditional music, which you don’t have to talk about when you sit together with people with the same background. There’s a non-verbal understanding of how to play something.

You have been very succesful, with international tours and awards. How do you deal with success? Does success also generate pressure?

Matteo Haitzmann: I don’t feel any pressure at all. So far, all of our artistic works have been the result of a natural process. We didn’t have to argue about artistic ideas and compositions. It all happened so non-verbally that it gives me a lot of trust and I don’t have to think outside. The band is artistically very coherent and that gives me so much support that I’ve never had to worry about whether our next program will be good. Or in which direction we develop. There’s a path we can follow, and since the road is so clear, it’s impossible to get lost in diversions.

“WE CAN’ T AFFORD TO PLAY A CONCERT WE DIDN’ T GIVE A LOT OF THOUGHT TO.”

How are you doing with the the band’s success?

Julia Lacherstorfer: When it comes to composing, arranging and rehearsing, I feel the same as Matteo. It’s just the way it is. I don’t question my own creativity, but I just know: I want it to sound that way, and I know why. When the music has been recorded, mastered and published and something intimate has been made available to the public for evaluation, then that is a vulnerable moment, because it hurts when people say something negative. Of course, everyone can have their opinion and I can take away something from every bad review and question whether it is valid or not. I do feel a certain amount of pressure and it seems like the audience’s expectations are rising. It might just be my imagination, but, we can’t afford to play a concert that we haven’t given a lot of thought to.

Matteo Haitzmann: Expectations are rising, but a certain part of our audience wants us to remain static.

In what way? Because they prefer the familiar?

Matteo Haitzmann: Yes, or some people say:”It’s getting more and more demanding,” or, ”This has been quite challenging to listen to”. Some people want a folk music entertainment band with a twist. That’s perfectly okay, but that’s not our current artistic position.

Julia Lacherstorfer: And it never was.

Matteo Haitzmann: Actually, this is crazy, but it’s all about standstill.

Many thanks for the interview.