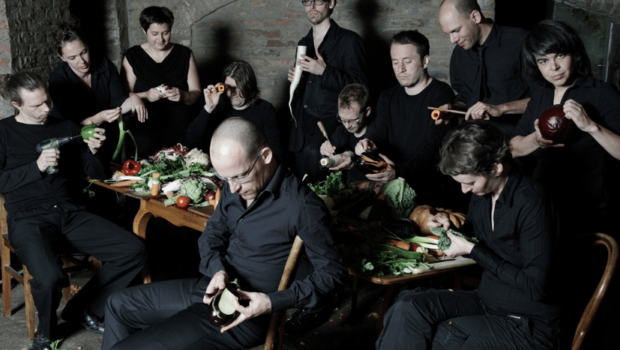 All kinds of vegetables are considered as potential instruments. Although turnips were initially preferred, due to their size and consistency, the spectrum gradually expanded. Some of the used vegetables are to some extent left in their natural state, some are specifically processed and refined, some combined with eachother. The pumpkin bass drum or the leek violin are already made beforehand. Other unfinished vegetables are processed with knives or drilling machines, with carrots are used as mouthpieces. Some  vegetables are played purely acoustically, in concerts they are usually connected to microphones or pickups – and after the concert, all instruments are cooked and eaten together with the audience.

At Home Session #2 – The Vegetable Orchestra

To gain the most value from vegetables, it does of course requires sophisticated sound technology. The Vegetable Orchestra has three of them: Christina Bauer, Klaus Hallmann and Lutz Nerger. They also lay the foundation for the sound recordings. By now the orchestra has released three CDs: Gemise (1999), Automate (2003) and Onionoise (2010). Future plans include the development of new instruments and new arrangements. For some time now the orchestra has been working on the construction of a vegetable organ. Further focuses are the search for new hybrid instruments as well as the stronger integration of electronics and an emphasis on a appropiate cinematic level. To mark the year of its 15th anniversary, the current repertoire includes older pieces and projected film clips of previous performances.