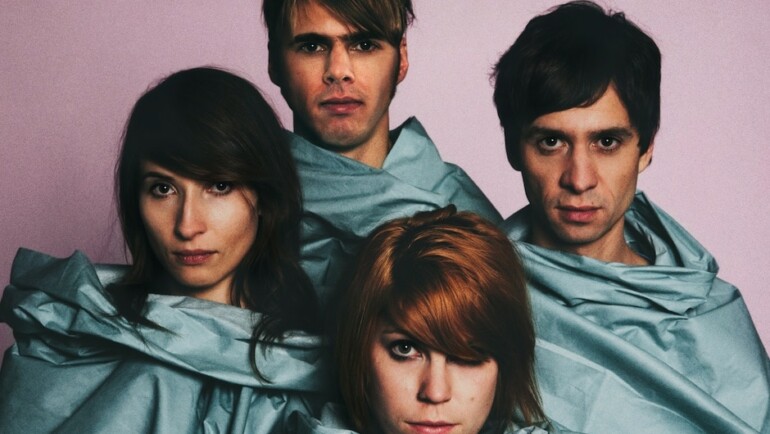 After three rocking albums and years of intensive touring, Austrian indie-pop veterans Velojet forge a new direction with their latest album “Panorama” (Schönwetter Records). Their music is inspired by all forms of pop music from the last 50 years. Shimmering acoustic guitars hover over ethereal keyboards, heartbreaking vocal melodies carried by a fast, catchy beat, and a beautiful brass and string section brings it all to an emotional climax.

In the past few years the four band members have undergone an impressive development. Back from a reflective trip in a ’66 VW bus that took them from Italy and Corsica to Thailand and India, they now sound a lot more mature, melancholic and profound. Clearly you can’t go on forever as an always cheerful, good-humored indie party band. As we all know, every party night has to come to an end. “We were so far away, but never closer to ourselves,” sings vocalist, guitarist and band leader René Mühlberger in “The Sea is the Ocean is the Sea”. This is an extremely exciting new facet of Velojet and is evidently highly appreciated by both fans and critics.

The songs of the new album are framed by dreamy and effective instrumental tracks, which open up a whole new cosmos of beautiful melodies. Psychedelically tinged, the opulently arranged sounds alternate with intimate, sparsely orchestrated ballads. The album was produced by Magnus Henrikkson from Sweden, who made a name for himself as the drummer of Moneybrother, and is responsible for the wonderful balance between vocals, instruments and effects on this album. The first single release “Angeldust” clearly sets the tone of the album’s new claim. The album intro impacted by organ sounds and acoustic guitar is followed by a striking entrance of the rest of the band.

The epilogue forms the climax with strings and wind instruments, before the final act suddenly ends with almost nothing but vocals. Hence, this album is far away from the Strokes-influenced indie rock sound of the first albums. In general, the new songs are a lot of things, but can definitely not be pigeonholed in conventional categories. For this album Velojet pushed the boundaries by blowing up conventional song structures, expanding instrumentations and experimenting with Pink Floyd-esque synth sounds.

The whole soundscape of the album sacrifices a bit of rawness and energy, as it is by far not as rampant as the former albums. However, in this case, this doesn’t matter and is not necessary, because the current album feels as if it is supposed to be different and to gain new ground in other fields with new perspectives.

“Panorama” is a wonderful new album that surely marks a turning point in the creative work of Velojet and therefore definitely deserves the highest recognition.

If you happen to be in London town on the 14th of March, we highly recommend you stop by the Hoxton Square Bar & Kitchen and check out Velojet performing live!