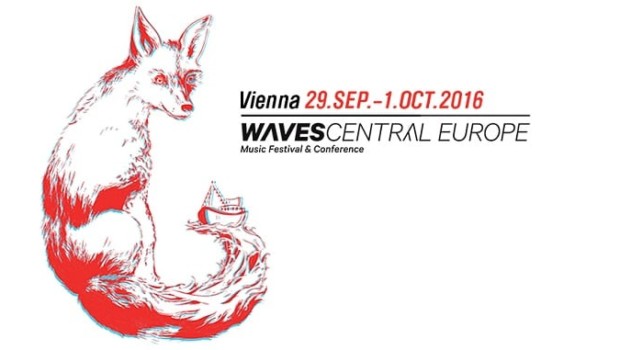 2016 will be the 6th round of the annual Waves Vienna – Music Festival and Conference. From the 29th of September until the 1st of October, this multicultural initiative will be transforming established venues and exclusive off-locations around the new festival headquarters in WUK into a concert and performance roundabout.

Waves Vienna 2016 is a festival of exploration and in the course of its existence wants to bring musicians from across the planet to Vienna. It has also taken “East Meets West” as a working motto and created the only platform in Europe where eastern and western music scenes can come together. Waves Vienna consists of two programs: a live part, in which musicians can present their works to a large and varied audience and the Waves Vienna Music Conference. In the 6th year of its existence the festival has made its biggest move ever. In the past, events were held in locations along the Danube Canal, through the second district, over the Ring Street and up to Karlsplatz. In 2016 Waves has moved to the other side of Vienna, to the ninth district in the West.

The WUK, a former train factory, is the homebase for a multipurpose (music, performance/dance/theater, children’s culture and applied arts) cultural institution spread over 12,000m2. It is the largest independent cultural centre in Europe, and a place where the arts, labor and political activism meet. WUK provides a dense program of events including dance and theatre performances, exhibitions, live concerts, DJ-acts and club events. Waves Vienna will be hosting shows in the great hall, the foyer and the WUK pub. The exhibition hall on the first floor and the project room will be used for the Waves Vienna Conference and the Music Hack Day.

As far back as the 1920’s, the basement of the Cafe Weimar was home to the dancehall “Weimar”. After many renamings and a renovation in the 70’s the dance hall was reopened under the name “Die Palme”. It attained legendary status as a cult event location and one of the first three student dance halls to be opened after the second world war.

From an architectural perspective, the Exner Saal with its Jugendstil design elements is one of the most stunning venues at this years Waves Vienna. The dark wood, upholstery, curtains, and lighting fixtures of the former meeting hall come together in a impressively unique but harmonic whole. This is the first time Waves Vienna has used it as a festival venue.

Puppets are usually the center of attention on this stage. The Schubert Theater is the home to an adult puppet theater specialising in morbidly comic works. This year Waves Vienna will become the puppet master and host in yet another very unique location.

Waves Vienna is happy to announce two new guest countries for this years event. First off, Germany, a country that we not only share a language with but also a network of connections in the music and business scene. Germany is also one of the largest music markets in Europe and the rest of the world. Our partnerships with the Reeperbahn Festival and the c/o pop have often brought us to Germany, and we hope to strengthen and build these connections as a result of this years focus on Germany.

Our second guest country is one of the most multifaceted and interesting countries we have had a pleasure to present as a part of Waves Vienna: Israel. For many still a great unknown, we are convinced that Waves Vienna will help to provide the basis for many new discoveries, friendships and cooperations.

2016 will see a further cooperation between Waves Vienna and Austrian Music Export in the form of the Waves Vienna Conference. A conference day on Friday, the 30th of September, followed by a workshop day on Saturday, the 1st of October, will be taking place in the festival center in WUK. Under the motto “Collaborate. Communicate. Connect” this years conference will provide an opportunity for networking between Austrian and international participants. The historic ambience of the WUK galleries, the light-filled project room, the WUK pub, the green courtyard and the traditional Cafe Weimar will provide the stage for a meeting of labels, managers, bookers, journalists and promoters.

Making connections happen is the goal Waves Vienna and Austrian Music Export aims to achieve through a variety of means. In addition to 45 minute slots with representatives from the guest countries and journalists, Speed Meetings with Austrian and international festivals will be possible. New this year will be the “Pop-Up Sessions”. This format is for all those who want to get away from a hectic business schedule and enjoy a relaxed atmosphere listening to inspiring success stories from successful artists and international players. Special networking sessions for women in the music branch are also planned.

Although Germany is one of the most important foreign markets for Austrian musicians, Israel is still a relative unknown for the local market. That might be just the reason it makes a particularly interesting location for future export activities. The “Round Table Networkings” with Germany and Israel offer an opportunity to encourage examination and the development of new networks between Austrians and the guest countries as well as between Germany and Israel.
The primary subject of this years talks and panels will be the interdisciplinary monetisation of music. Presentations of best and worst cases from the realms of video games, TV, advertising and streaming should help bring fresh input and information about new trends while offering some new starting points for creative monetisation strategies.

The Saturday afternoon workshops in WUK will be held in the German language and cover themes like crowdfunding, silk-screen printing, or networking opportunities for students and include a guided tour through creative Vienna for international guests.

Last years Music Hack Day proved to be such a success that it will be returning again for 2016. A cooperation between the TU Vienna and the JKU in Linz, it will be taking place on Saturday the 1st of October, and bring together creative participants from various countries who want to develop their ideas around apps, music instruments, sound installations and interactive hard and software. Anyone with innovative ideas combining music and technology is invited to participate and make them reality. Registration is free and can be completed online.

As in previous years Waves Vienna 2016 will include the opportunity for indie labels to present their wares at the festival central in WUK. Participation is free for indie labels as well as visitors who want to purchase merchandise!