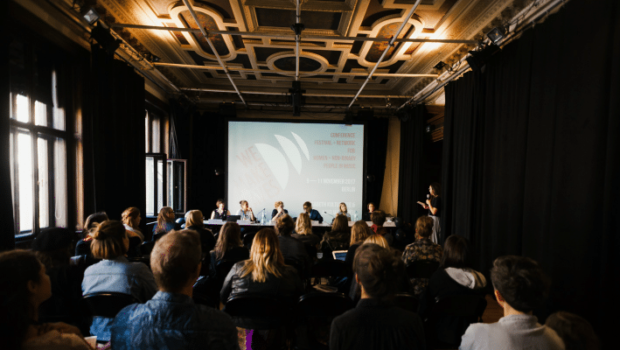 Influencers can be bloggers, journalists, vloggers as well as all other types of digital users. NILOUFAR BEHRADI-OHNACKER from blogrebellen.de, JAN CLAUSEN from the PR agency Factory 92, ANNEMARIE REISINGER-TREIBER (Warner Music Austria) and SANDRA THIER from Diego5 spoke about this subject and other future-oriented topics from the marketing world.

“What does it feel like when someone says to you that you’re an influencer?”, the moderator asked the only blogger of the round, Niloufar Behradi-Ohnacker. She said, she didn’t want to be portrayed as an influencer, because she doesn’t really see herself as an influencer. For her, the term “influencer” has more to do with a younger audience.
So what are influencers then? In the course of the panel the group did not find a clear answer to this question, but at least there was a consensus: if you take it literally, everyone can somehow be an influencer.

YOUNG PEOPLE FOR A YOUNG AUDIENCE

Although not quite: “Influencers are people who reach a lot of other people, so they have a long range,” said Sandra Thier. And she is probably the one who works most closely with the “classical” influencers. These are young people who use digital channels to make themselves heard and gather thousands of fans. This can be done via social media, but also via apps such as musical.ly, whose basic idea was simply to “just” playback videos.

But we shouldn’t underestimate these platforms. Thier gave an example: Lena and Lisa are German twins, who became known through the above mentioned playback app. The two teenagers have 11.8 million followers on Instagram. You can assume that at least temporarily everything that these girls touch becomes a bit of gold. Reisinger-Treiber and Thier view influencer marketing as a cooperation between two parties that can both benefit from each other’s fanbases.

FAMOUS FOR PLAYBACK? ON THE INTERNET IT IS POSSIBLE

Of course, this is not for everyone, PR pro Jan Clausen threw into the round. Influencers can’t be forced to use your content and, conversely, you cannot always let the influencers influence you. The right content has to go to the right person. The task of a content marketing agency must be to convey a precise idea for a campaign. And if you want to appeal to young people, you can easily do so through influencers.

If you manage to bring influencers and musicians – who are working in the same direction – together, then both of them could benefit, said Reisinger-Treiber. An example of this is the interview German YouTube star LeFloid did with the rapper Marteria. But is this all just a trend and will we have forgotten the influencer culture in a few years’ time? According to the experts, “No.”
Some of today’s Internet stars are most likely just a passing fad, but others will continue to find ways of expanding their “universe”.

NO ONE REALLY KNOWS WHAT THE FUTURE MAY HOLD

You could tell: the music business already has a lot of respect for these young internet celebrities. But the answers to the question from the audience as to whether it was really ethically justifiable to use young people as “advertising media” remained rather vague. You don’t put anything in anyone’s mouth. And the influencers ask for cooperations of their own accord. Sandra Thier summed it up well: “We have absolute no clue what will come next,” and that’s why you have to wait and keep watching the scene.

Anne-Marie Darok (translated from the German by David Dempsey)