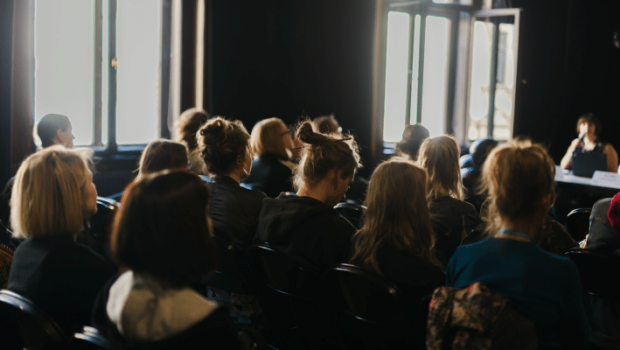 During this year’s club and showcase festival WAVES VIENNA, special attention was paid to the music business in the Czech Republic. Numerous experts were invited to participate under the title “Focus Country Czech Republic”. Three of them took part in the first Czech panel: MÁRTON NÁRAY from the CZECH MUSIC OFFICE, PETR BLAŽEK with his label “DaSka Records” and DANIEL ŠUBRT, bandleader of THE DRAIN.

Márton Náray smiled as he handed out the leaflets and said that it was a great pleasure to have managed to fit so many Czech music experts into a small folder. Bands planning to tour in the Czech Republic in the near future should take a closer look at the folder and the persons mentioned within. Because without connections, it is not easy to find a way into the Czech music scene.

This was also confirmed by Daniel Šubrt, who emphasised the need for personal connections to the Czech music scene when asked about the best way to get there. The best thing to do is to contact bands from your own country who are members of a similar genre and ask them if they have ever played in the Czech Republic. If so, please ask for a personal recommendation, which can be sent to the respective booker or club operator. Šubrt said he himself often receives such mails in which one band recommends another. If the cooperation at that time had been good, the interest in this new group would immediately be intensified.

The Czech music business still lacks professionalism, said Petr Blažek. He ironically remarked that he had actually planned to speak only optimistically about the subject of music business in the Czech Republic. There are two higher educational institutions in the Czech Republic where you can study culture and music management, but somehow he has never really met music managers who have actually completed such an education. Building up a new band is difficult, but the hard work can really be worthwhile if you do it right. Blažek is currently in charge of five bands at “DaSka Records”, with which he is – as he remarked – going through ups and downs.

IF EVERYONE STICKS TOGETHER, THEN SOMETHING CAN CHANGE

It isn’t that the club owners or bookers themselves are unprofessional, Náray said, it is just that they don’t communicate with each other. And Šubrt, who has been researching the Czech music business for some years, was in his element: It shouldn’t be necessary to meet at showcase festivals several hundred kilometres away from home if you live only 50 kilometres apart from each other in the Czech Republic. Club owners should communicate with each other, they should work together to organize bands. The three speakers agreed that such cooperation could benefit everyone.

But it’s not all bad, because the Czech scene has improved considerably in recent years. This is also reflected in the sales figures: the music business is still making money, be it in the digital or analogue sector. That is why the Czech Music Office was founded, because after many years of planning, it was clear that a state contact point for the local musicians had to be established. The Czech Music Office stands between the artistic and the private sector, trying to unite both areas.

“You can’t do it by yourself,” said Náray, saying that if you want to make progress as an industry, you have to stick together. And all three of them agreed on that.

Extended Czech and Italian delegations, dedicated panels and country receptions were a major part of Waves Vienna 2017. In November 2017, Austrian Music Export will be continuing a series of Austrian networking and showcase events in the Czech Republic (Nouvelle Prague) and Italy (Linecheck Festival/Milan Music Week), this year´s focus countries. Both festivals will feature a networking and showcase event with Austrian bands, matchmaking sessions, and a relaxed Meet & Greet with international music industry representatives, media and artists. If you are interested in taking part in the events, please get in touch at office(at)musicexport.at.