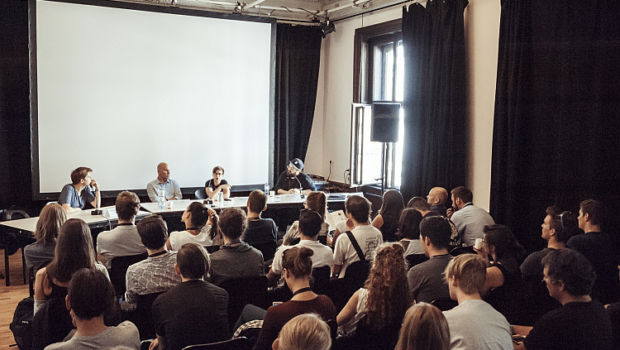 This year, Waves Vienna Festival took place between the 29th of September and the 1st of October. Experts and professionals from the international music industry came together in Vienna to gather impressions and information about the Austrian music scene. The festival and conference attracted 620 delegates and over 11,000 visitors to come together and take part in this years motto: “collaborate, communicate, connect”. This years guest countries were Germany and Israel, and guests had the opportunity to get to know more about their music scenes during a panel discussion at the conference.

THE MUSIC SCENE IN GERMANY AND ISRAEL

Who could have imagined that that music scenes in the two guest countries could have something in common? Their commonalities and much more were discussed at the presentation “The Music Scene in Germany and Israel”. The presenters were Andrew Campbell, a German PR- und Artist-Manager from Steam Music, Ina Kessler and Mike P. Heisel from the German non-profit Initiative Musik, Eyal Brook, whose office represents many artists in Israel, and Hadas Vanunu from International Music Showcase Festival Israel. Eyal Brook, Ina Kessler and Mike P. Heisel began by presenting their projects and the Israeli music scene.

Eyal Brook has been active in the music business in Israel for many years. Before his legal work with “Eyal Brook Law Office”, his band released two records and he also worked for the “Helicon” label where he negotiated with Universal and EMI in Israel. His presentation on the music scene in Israel exposed a few similarities and parallels that most people from Austria or Germany probably weren’t aware of. The scene in Israel is very mixed, but there is a strong focus on innovative, creative and improvised music as well as new technologies. Eyal Brook also showed some examples of chart hits that had their roots in Israel, like a song from the rapper Mattafix that had an intro based on a melody from an Israeli song from the 70’s. Just one of the examples of Israeli samples, melodies and influences that have been finding their way into the western music world since the 1960’s. It was a trip through the Israeli-German music history with several examples of sound parallels and the ups and downs of certain bands and genres.

At the end Ina Kessler and Mike P. Heisel presented their project Initiative Musik and talked about their experiences with the music scene in Israel. Mike P. Heisel has been deeply involved in dance music, first as a DJ and then as marketing director for Sony Music. Heisel told about the particularly strong connection to Israel during the late 80’s and 90’s. Ina Kessler presented the hard facts around Initiative Musik and the German music market. Using graphics she showed that in Germany, as in many other countries, a few massive firms dominated the music branch, with many smaller independent companies surviving on the edges. Many of those companies consist of between 1-5 people. One interesting observation was that CD sales still work well despite many releases being digital only. The exact statistics, graphics and facts can be found on the homepage of Initiative Musik.

The collaboration between Israel and Germany works. The strong presence of Israeli music in the western world is particularly surprising since most of the musicians using them aren’t even aware that they come from Israel.