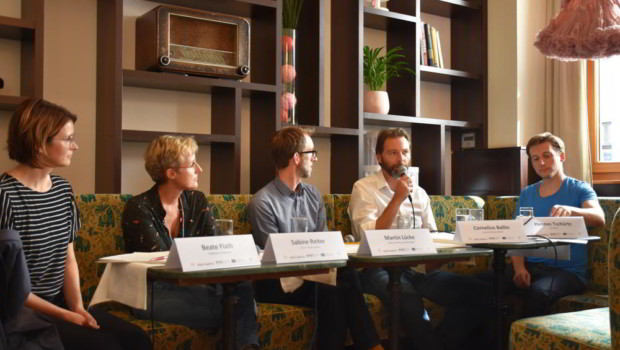 On the occasion of the recently published book „Music Business Research. The Foundations of a New Scientific Discipline“ by Peter Tschmuck, Beate Flath & Martin Lücke, one thing is made clear right at the beginning: The entire history of music contains economic aspects, a fact that is often overlooked by some disciplines or points of view. For this reason, the starting point of the panel was the latest developments in music industry research, a discipline that is often described as young and aspiring. At the centre of the discussion were questions about the institutionalisation of this new discipline “music industry”, which in recent years has “risen like a yeast dough”. A wide variety of institutions are beginning to develop, the disciplines are beginning to bear fruit and are gradually establishing themselves around the globe, also in the form of research groups. The paper „Music Business Research. The Foundations of a New Scientific Discipline“ is a monumental work for the methodology of the music industry.

“rather medieval instead of exel tables, thats not reality.”

Beate Flath states right at the beginning that there are essential thoughts on the so-called transdisciplinarity of musicology: Everyone is talking about the same things in different words – that’s a repeated conclusion. The gap between theory and practice is shaped as a dialogue between the various fields, a dialogical process of different languages or nuances. This is precisely why it is important to communicate at eye level, to open up the potential for communication to non-academic approaches as well, and to sound out the focal points and approaches in the process. In this context, „Music Business Research. The Foundations of a New Scientific Discipline“ shows an essential attempt to unite and make visible these contrast-coloured languages and to learn from each other in the process. This is followed by a plea for the integration of music economics issues in musicology, because one of the fundamental problems is the way in which music is taught. Especially at universities, the teaching is still predominantly classical and with a view to the past: “rather medieval than exel tables, that´s not reality”.

A little later, the actual discussion is initiated at the coffee house table under the motto “What does research need from practice and vice versa?”. Again and again, the question of a concrete, functioning combination of theory and practice opens up. In many places it turns out that this is utopian, because institutional exchange hardly ever happens. In this context, Sabine Reiter explains the basic functions of mica – music austria as a leading mediation platform in the discourse on music industry issues. As a real example Reiter mentions the increasing use of scientific data within politics, this use of data can turn out to be very fruitful and the conjoining of diverging areas happens concretely here.

Heart against numbers – Data as the new magic word

Eventually the new job profile Data Science and the increasing automation of the music world were discussed. Trends, hypes and other aesthetic tendencies in particular can be anticipated to a certain extent in order to automate them. This so-called trend setting is a macroeconomic trend to enhance oneself. The streaming platform Spotify now functions here as a scientific object: music becomes the subject of pure mathematics in search of the perfect hit template. Spotify as the holy grail of the music industry. The consensus here is: There are many different reasons to investigate numbers and data sets, many different perspectives on the same thing. Here, too, the classic division between theory and practice still prevails. It is less a question of retraining than of learning from each other. If everyone chases the same numbers and data, everyone would be the same, is another romanticisation. What influence do data, numbers and scientific research have on the artists themselves? It is through networks and interest groups that music makers can successively obtain the data that determine and colour their world.

Cornelius Ballin (Universal Music Austria) explained another specific case of mixing numbers and reality: bands and genres are successively developed and influenced on the basis of Spotify playlists. The numbers, the calculations, thus become physiognomy, and increasingly construct the product. Data has long been regarded as the new magic word. Hannes Tschürtz (ink Music) positioned himself within this discourse with a rather romantic approach. He described the dichotomy between intuition and data analysis, as well as the construction of fictitious artist personas on the basis of an algorithmically evaluated ideal. A further gradient is created here: algorithmic search engines VS the real feeling. In the end, one thing above all is clear: Everyone speaks in different languages and moves in different reference systems. Forms and formats must first be developed so that the two areas can and want to come together. Where do we meet? What are the concerns and goals? That can only happen when these questions have been completely clarified.