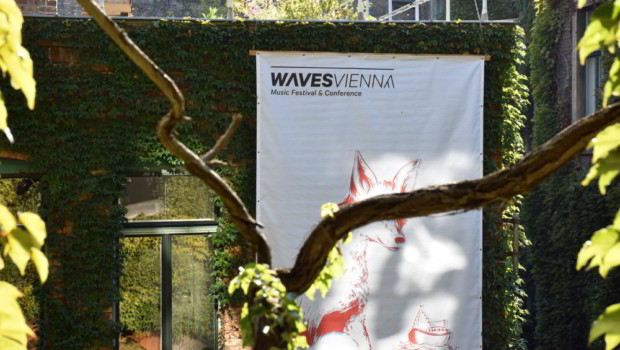 From September 27-29, 2018 the Waves Vienna Music Conference, organized by Waves Vienna and Austrian Music Export, took place for the eighth time. Hundreds of national and international music experts, organizers, label owners, bookers, and musicians met for discussion and networking at Vienna’s WUK. Ada Karlbauer und Stefan Niederwieser have been on location, to report on the outcome of the conference.

Under the title “The Music Scene in Slovakia” a talk on the current developments and challenges of the Slovak music market was held in line with the main theme “East meets West” and opended the second day of theWaves Vienna Music Conference2018. Later, one could meet music professionals from Europe´s very West at “The Music Scene in Portugal”. Slovakia and Portugal are this year´s focus countries.

The Music Scene in Slovakia

“The Music Scene in Slovakia” opened the thematic field with a list of artists who played the previous day at Waves Vienna. It was an exemplary symbol of the lack of attention to the neighbouring country. Hardly anyone knew the names that appeared on the slide show. The music scenes in Slovakia are very small and manageable, everyone helps and works together, but the great international breakthrough has not yet happened.  The guests were : Michal Bereznak (LALA Slovak Music Export / SHARPE festival, SK), Alexander Čerevka (LALA Slovak Music Export / SHARPE festival, SK), Dalibor Kocian (Stroon, SK), Monika Satkova (Pohoda Festival, SK), Robert Špoták (Slovak Arts Council, SK) Moderation: Peter Dolník (Radio FM, SK).

What strategies are there for Austrian artists to play in Slovakia? An essential factor here is the networking itself. One possibility is to fuse planned gigs with local artists that would be on a similar level in terms of music aesthetics. Such connections make it easier to enter the Slovak music scene. Nevertheless, there are no standard plans that will work to develop a music career. It quickly becomes clear: festivals are the big topic in Slovakia, the place where most of the musical import and export takes place. The festival presence of female artists is an essential factor in increasing the artistic reach. One tip is therefore to promote different festival line-ups for the time being, even if you are still unknown. The search for the right promoter is just as central.

Monika Satkova explains that it is often more a matter of the personal preferences of the bookers themselves than of a concrete “recipe” that should be followed. To make it to the line-up of the Pohoda Festival, for example, it is enough to appeal to the subjective tastes of the bookers themselves. At Showcase Festivals on the other hand, decisions about booking and artist decisions happen directly on the spot. Emails have not been opened for a long time. The actual booking work happens mainly behind the computer, without human interaction. That’s why it’s the consensus that socialising is the best part of the Showcase Festivals. It’s also about personal recommendations, that’s how emails might actually get read. Therefore a piece of advice: If you need more time, then you should better not play. Wait for the right moment, because you usually only have one chance to play in an established showcase. In this context, Satkova underlines the positive aspects of the constant festival presence of artists. These appearances are essential references, which in the end make it possible to cross the borders of Slovakia.

„It started from the bottom“

A major problem is the lack of infrastructure which makes it possible to go abroad. Many of the bands have no tour managers, no support, which leads to more hard work. This results in artistic frustration which is mostly only due to a lack of a middleman, which in turn has an effect on the mood of the Slovakian music scene itself. That’s why the “Slovakian Music Export Service” was founded 3 years ago and has developed into an essential contact point for musicians. The main aim is to provide local education. A lot is in motion, but it takes time. Finally, the general consensus is: Slovak bands have a lot of potential but currently lack the self-confidence to position themselves within the global music market. It’s not just about distinctive stage skills, but rather about being able to think beyond borders. All in all, everyone is still waiting for the “Big Success Story”, because the fact is that there are no big names yet. Such a success story could also have positive effects on the self-perception of the local acts, inspire them, and encourage them to take a step themselves. But that also means constant confrontation with the competition, you have to be strong and really want it, because it’s a mission! (AK)

What is a blog? First of all there was silence, nobody wanted to rush ahead with an answer. Quite some time was spent discussing whether blogs are still important today and how best to contact them. Financially, blogs wouldn’t do much good, but you can’t ignore them, said a local music manager. The early panel after the first night of music didn’t have an easy time, sleepy eyes and queasy stomachs were everywhere. But some tips were still useful: “Don’t send reminders, don’t annoy”, was a credo that repeated itself. If you contact various blogs as an artist, you have to have a good photo, some information and some social links, the music should be on the usual streaming platforms, because that’s where the playlists are made.

Everyone who sat on the panel said that they generally don’t pay bloggers – and influencers – anything. Blog marketing agencies were not addressed thematically. Blogs, according to Mariusz Herma of the Polish beehy.pe, might not immediately trigger many plays, but they would be incubators, with many journalists among their readers who want to discover something new there. And that’s why the influence of blogs would often be much greater than you might think. (SN)

The Music Scene in Portugal

The panel was well prepared and very motivated; there were lots of statistics, but also nice stories. Like the one on Madredeus, a Portuguese band that first performed at a Belgian festival, later became number one there. Madredeus then was selected by Wim Wenders for his film “Lisbon Story” and was successful in markets like Italy and Mexico. Or Rock in Rio, a festival founded shortly after the end of the Portuguese dictatorship and now the country’s largest.

There are now 272 festivals in Portugal, attended by 2.5 million people. Recordings worth 35 million euros are produced, with streaming accounting for more than half of the total, Youtube paying scandalously low prices (about one eighteenth of the other providers per user) and older people hardly streaming, although three quarters of them have Internet access. There are no small, independent distributors in Portugal, recordings are distributed by the majors, and the French retailer Fnac still dominates the market.

It was agreed that there are once again more songs sung in Portuguese again. Publicly financed cultural associations organise local culture outside of the big cities of Lisbon and Porto, so there is no classic circuit for tours and it would be a good idea to look for Portuguese partners. On the other hand, music by people from the former colonies has conquered the heart of the country, a lot of unique music is being created – a taste of which was presented at the first Hyperreality where this young scene was a big guest in Vienna. Participants would like to see more panels like this. (SN)

Bosnia, Lithuania, Slovenia, Poland and Portugal were represented at the radio panel. Radio functions quite differently in all these countries, the number of public channels varies greatly, as do the regulations. These include the quota for music in the national language (national quotas violate EU law, so this quota can only be implemented in Austria via a voluntary agreement). In Poland this quota is currently 33%, many even demand 50%, in Slovenia it is 40%, whereby a quarter of the music must be younger than two years. This is similarly regulated in Portugal, with only 60% and 35% of music younger than one year. In Lithuania and Bosnia there is no quota.

Many reported successes that could be achieved by playing music that was difficult to play on commercial radio. The challenges of the future were barely addressed – non-linear listening, archive availability, podcast offerings – the competitors of national radios were not other national radios, but global players. (SN)

A Music Career and Family – Are They Compatible?

“Women eventually stop making music at a certain point and that sucks.”  Teresa Rotschopf (Bunny Lake, O) spontaneously got a lot of applause for this statement; and it was easily understandable. Many musicians are parents in a situation to which the state offers hardly any answers – irregular working hours, often late at night, long tours, strongly fluctuating incomes.

In many other industries it is common for childcare to be offered, partly at work, partly at conferences, but this would be completely unheard of in the music industry. Buyouts for babysitters would have to be normal. And the industry as a whole must consider how to offer collaborative structures that support musicians and not just leave this challenge to individuals. An Australian parliamentarian turned to parliament last year while breastfeeding her daughter. The music industry is still far away from something like that, children in the workplace are not a matter of course. (SN)