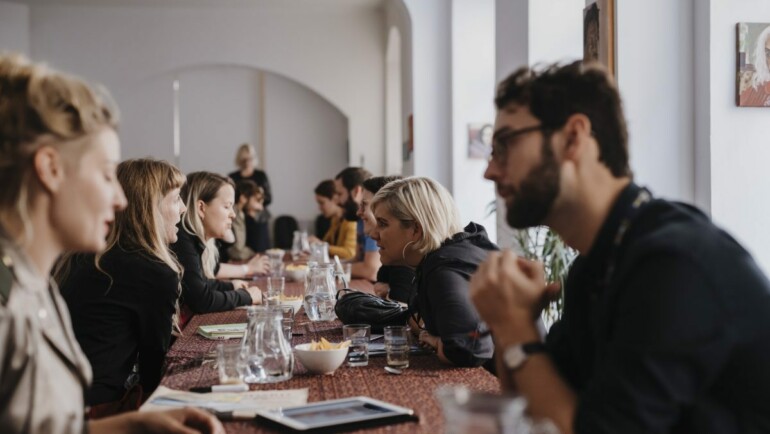 A Keynote interview with Laibach’s Ivan Novak, Challenges Entering Asian Music Markets, a presentation of the results of the CEEMID – Music Professional Survey and Women in Live Music Production as the topics of the Waves Vienna Music Conference 2019 – Focus Countries: Hungary and Sweden

In September 2019, the Waves Vienna Music Conference, organized by Waves Vienna and Austrian Music Export, will take place for the ninth time. National and international music experts, label owners, bookers, and musicians will meet during the day for lectures, discussions and networking events at Vienna’s WUK. In the evening the festival will host performances of around 100 upcoming bands. For the third time this year, the “XA – Music Export Award” will be presented as a part of the festival. Waves Vienna Music Festival & Conference 2019 takes place from September 26 – 28, 2019.

The conference programme will address current issues in the music industry and invite music professionals from all over the world to Vienna. Experts will provide useful insights into the challenges faced by European artists and companies trying to expand to Asia. In the panel “Women in Live Music Production” successful female pioneers in the live industry will share their experiences and present initiatives and networks for women in the field. A discussion on the “Agent of Change” principle will examine current challenges and future prospects for music venues, cultural communities and communal life in major music cities. The panel will discuss possibilities for an intermediary between promotors, neighbours and municipal policy. What could the function of a “night mayor” [Nachtbürgermeister] look like for the City of Vienna?

Mr. Ivo Saliger (alias Ivan Novak), member of the Slovenian band Laibach, and co-creator of Laibach’s strategy and theory since 1980 will talk about overcoming the assumed impossibility of making an international career out of a country with almost no music industry structure, no support mechanisms, but some barriers.

CEEMID is an effort to gather cross-industry statistics on music and cultural industries in general. The CEEMID Music Professional Survey was developed by Daniel Antal and included 11 countries in 2019. The survey aims to compare concert opportunities, royalties, and grant possibilities for musicians in their countries with those of their colleagues in the wider region and Europe. In spring 2019 the survey was distributed among music professionals in Austria too. At the Waves Vienna Conference, Daniel Antal will present the study and its outcomes for the Austrian music market. He will suggest some possible policy and strategic solutions to be debated afterwards.

Music Data – work it out!

Streaming platforms, digital radio, podcasts and social media open a whole new range of opportunities for independent artists and labels to communicate their content and distribute their music. At the same time the new media often lack sufficient revenue streams and bear the risk of streaming and licencing fraud. The discussion “Take what’s yours! Music data for the indies” gathers some of the most innovative tech start-ups in the music business focusing on indie artists. Get to know more about world wide airplay monitoring (WARM, DK), comprehensive data analytics (ForTunes, AT), and professional media monitoring (Observer, GER). Learn about the founders’ ambitions and find out how to build strategies in the digital realm.

Is banning content of dubious performers a moral censorship or an acceptable regulation? Under the lead of Susi Ondrusova (FM4), the artist Maria Scharl, journalist Karl Fluch (Der Standard) and Ivan Novak (Laibach) will discuss the dilemma fans and institutions are facing when artists are exposed for reprehensible views or illegal actions. Do streaming platforms or broadcasters have the moral right or even an obligation to remove the repertoire of shady people – not to be confused with controversial content – or is this an illegitimate approach, a form of moral censorship?

Hungary and Sweden as Focus Countries in 2019

True to the motto “East Meets West”, the Waves Vienna Music Conference dedicates a part of its programme to the respective music markets and scenes of the two focus countries Sweden and Hungary. Since at least the worldwide success of ABBA, Sweden is seen as one of the most successful nations when it comes to pop music. The second focus country, Hungary, is very connected to Austria, not only geographically but also culturally and historically.

Meet the Hungarian delegation and get to know the masterminds behind Sziget Festival and Bush – Budapest Showcase Hub as well as our guests from Sweden and their festivals Live at Heart and Viva Sounds.

Dedicated networking sessions will once again bring the local scene closer to international festivals, journalists and the delegations from Sweden and Hungary. Participants include some of the most important events on the European circuit and festival members from the INES programme like Ment Ljubljana (Slovenia) and Sonic Visions (Luxembourg), Eurosonic Noorderslaag (The Netherlands), Wide Days Festival (Scotland), and more.

Further conference highlights are the receptions by this year´s focus countries Hungary and Sweden and networking events from Switzerland, the Czech Republic, Slovenia, Southern Germany and Nordrhein-Westfalen, Ukraine, Liechtenstein, Israel as well as Ticketmaster.

At the end of September, the Waves Vienna festival will once again make Vienna’s ninth district a hotspot for musicians and music fans from all over the world. About 100 acts will perform in the festival headquarters, the WUK, and in surrounding locations. The showcase festival offers a wide range of genres and a stage for new international and local artists alongside established acts like Iris Gold (DK), Dan Managan (CA), or Shortparis (RU). More than just a festival, Waves Vienna is a music business conference and offers workshops, panels and a lot of networking sessions.