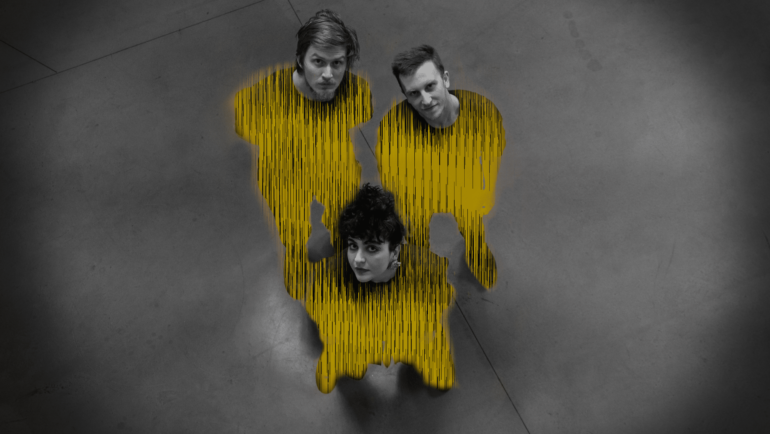 MONA MATBOU RIAHI (clarinet), ALEXANDER YANNILOS (drums) and PHILIPP KIENBERGER (bass) are known as busy and very active musical creative minds, who have already impressively demonstrated their extraordinary playing skills and broad musical understanding many times in a wide variety of projects. In their joint trio /KRY they take the game of stylistic unconstraint to the extreme and present a captivating sound that oscillates between simplicity and complexity, atmospheric calm and noisy high energy in a decidedly diverse manner. On April 17, the trio presented their debut album, released on Freifeld Tonträger, at Vienna’s PORGY & BESS. In an interview with Michael Ternai, MONA MATBOU RIAHI and ALEXANDER YANNILOS talked about /KRY’s basic musical idea, the openness of their sound and what the band means to each of its members.

All three of you are involved in many different projects. How did your collaboration come about? What is the idea behind /kry?

Alexander Yannilos: My brother was studying sound engineering in 2019 and needed to record an ensemble to graduate. He asked me for a band and I decided to put together a new lineup for the occasion. My idea was that this composition should definitely be one that works. I had played with Mona a few times before that and I’ve known Philipp for ages. I thought that the three of us would make a good constellation. I also had a certain musical aesthetic in mind for the band, it should be one with which everything is conceivable in the musical sense. And this expectation has definitely been fulfilled. It worked insanely well from the very first moment, so that we actually agreed immediately that we had to continue. Especially because of the very special setup. Mona had just bought new effects units, which made her sound really trashy and also changed the sound of my drums at the same time due to the crosstalk in the room. Add to that, Philipp’s distorted acoustic bass, which again contributed a very unique aspect of sound.

“There’s really nothing that restricts us in any way.”

Somehow, the first major musical foundation formed right away in this one session. The instrumentation, the effects and to some extent the musical direction, which settled somewhere between fragile and super hard. I think we were all happy that we could theoretically do anything in this band. There’s really nothing that restricts us in any way. We can take a more classical approach and work in a sound-painting way, we can destroy everything if we want to, we can improvise, we can compose very complicated music and rehearse that together. I think this breadth of possibilities is what makes this trio so appealing to all of us.

That means you quickly had an idea of where you wanted to go musically.

Mona Matbou Riahi: The nice thing was that a sound already emerged during the first jams. Normally, in other projects, you have to find yourself with the people first. That wasn’t the case here. I had never played with Philipp before and yet it clicked right away. It felt so natural. Also, we had a huge amount of fun right from the start. These are the things that perhaps excite me the most about this project. And of course the musical approach, which allows individual playfulness on the one hand, but makes it work in a collective, on the other. In /kry we stand next to each other as equals and have no front man. We are all equally /kry.

It sounds like you guys approached it without agreeing on much.

Alexander Yannilos: Exactly. It was actually the opposite of “agreement”. That may also have been due to the external circumstances. We didn’t have any pressure at all and could really just get started without thinking too much about it. That it worked out so well is of course great, but even if it hadn’t worked out, it wouldn’t have been a disaster. Our drive was really just the need to make music that suited us and that just came out of us. That’s how we came up with something that I think sounds very authentic. We definitely want to stay true to this approach.

What does the process of creating a piece look like for you?

Mona Matbou Riahi: A lot of it came out of improvisation. Philipp, for example, took some of the things we recorded at the jams home with him and wrote them down, arranged them, or composed individual parts. So the foundation for a number was actually already there. It was all very uncomplicated.

Alexander Yannilos: It has also happened that we actually already reached the end of a rehearsal and someone then played something again at the end for fun, and then a new session broke out of it. “Fly,” one of our wildest numbers and also one of our favorites, came out that way.

The beauty of your album is its musically diverse character. Some of it is really wild, but on the other hand there are also very atmospheric, quiet moments.

Mona Matbou Riahi: It was important to me that we also show another side of /kry, not only the wild or the high-energy improvisations, but also the fragile side. The first times, it was mainly pieces by Philipp that we played and worked out. I wanted to counter these musically and approached them with my own ideas. And I thought it was just great how the two of them immediately played with the things and found a different sound. It wasn’t that I came and told them exactly how we should play something, but rather that everyone was equally involved in embellishing a number with their ideas.

And to be honest, I also find it a bit exhausting for the ears when it’s just loud and heavy for an hour. That is indeed tiring. After three or four heavier numbers, I realize how much my heart is beating and I’m out of breath.

Is it fair to say that you can do with /kry what you can’t do in other projects? To what extent is /kry also a playground for you?

Mona Matbou Riahi: That’s funny, because I actually see all music as a playground. No matter what context I’m making music in. But the thing that makes /kry different from all other things is this childlike approach. It’s like the three of us going to a playground to discover something new. We try to find a way to express ourselves together. We create new things, sometimes break them again or discard them in order to develop a new approach. This childlike and searching, this openness as well as this chaotic element in our work, it’s all a lot of fun.

Alexander Yannilos: I remember when I was a kid, I used to throw myself off the three-meter board backwards, and it just turned out to be a backflip without me thinking about the consequences. It just worked out because I was small enough. It’s similar with us now. For example, when there is a complex rhythmic concept that actually requires us to count very precisely, we actually try to do the exact opposite. We play with how far we can lean out of the window, and refrain from showing the others where one is, to see if we can still land on the next beat together. And then it’s just a blast every time it actually wprks out, because we realize that we just broke all the rules and it still works.

And something also flows in from all of us, equally. Philipp and I, for example, used to have a lot of connection to heavy music, to hard rock. And something of that certainly flows in, as well as elements from jazz and even classical music. And I also think that our music has a lot of punk in it, in terms of attitude and the way we play. You can say that each and every one of us is actually at home in all genres. We simply allow ourselves to be children in an adult way.

This musical openness is also evident in the number “kry for freedom II”. A wonderfully weird dance track.

Mona Matbou Riahi: I love it, and this is rather rare in the circles I move in, techno and a really good electro set. That’s where I sometimes get told, ‘How can you even listen to that?’ For me, it’s super interesting to see how a really good DJ builds a set like that, how he designs the transitions and creates atmosphere. I’ve really learned a lot from this genre, especially that there’s also a narrative behind every set, even if it’s sometimes very abstract. Something similar is what the three of us tried to do. How do we create a structure, how do we design a sound that follows a certain dramaturgy?

What does /kry mean to you? Is it one project of many or has it become central?

Alexander Yannilos: You can say that the band is very meaningful to all of us and has risen to the top in importance. We all invest a lot in this project. In a way, corona has also helped us a bit in that regard. The two years have allowed us to sort out a little bit and determine priorities. I’ve often asked myself the question, do I really want something and does it really fulfill me? Do I want to put a lot of time into a project where, when I’m on stage, I feel like I’m interchangeable or it doesn’t affect me that much? All of us have gone through this process and in the end it just turned out that /kry is something we all want and take very seriously.

Mona Matbou Riahi: The projects are all very different and all demand something different. With /kry, however, I notice that I simply feel different on stage. I don’t want to say better or worse. The energy is just different.

You wanted to release and present the album earlier. I suppose it was corona’s fault that, that didn’t happen. But now in April it has.

Alexander Yannilos: Exactly, we have the big release concert on April 17 at Porgy & Bess. Originally, we planned to release the album on the occasion of our performance at the Kick Jazz Festival in December last year. We also worked very hard to get the album ready by then, with all the trimmings, so that we could then give it to the international promoters who were present as a kind of business card. But then it was lockdown time again and we knew that apart from the people from the Porgy no one would be present live at the concert. So we decided to wait a bit longer and present it in a way that suits us.