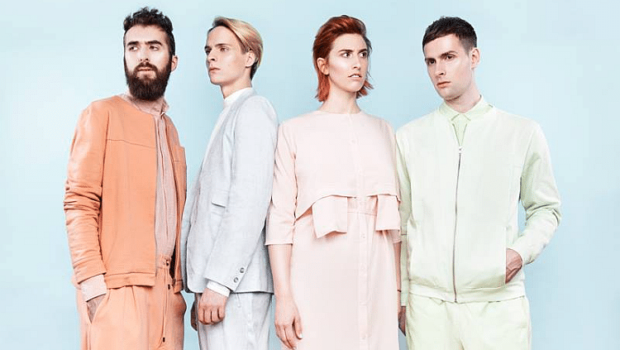 In May, the Viennese band KIDS N CATS published its second album “Juicy Worlds”. Since May 31, 2016 as part of their NASOM-promotion and their project “11 songs 11 Countries” they are on a one-year trip around the globe. Antonia Seierl spoke with JEANNE NICKELS, PETER PAUL AUFREITER and MARTEN KAFFKE about their “Juicy Sound”, and their ambitious journey.

How did you meet each other?

How did you get the name of Kids N Cats?

Peter Paul Aufreiter: Marten once called me when he was with Jeanne in Israel, and came up with this idea for the band name. We looking for a name and we liked Kids N Cats.

Since the band’s formation a new member has been added. Has this changed anything in your band dynamics?

Marten Kaffke: Definitely – Max [Maximilian Atteneder] plays drums, but he is also a keyboardist and when it comes to finding the melody he always gives good input!

Jeanne Nickels: He can sing very well. In the next few songs you will certainly get to hear him!

Peter Paul Aufreiter: Playing live with him is also extremely fun because he always totally flips out, which is infectious.

On the subject of “live”: You don’t just play live performances, but also DJ sets, including at the Celeste in Vienna. Do you prefer that to playing live as a band?

Marten Kaffke: It’s just a good addition! When someone asks you to perform then there always two options – if you want to play live or DJ.

How do you present a DJ gig? All together behind the decks or individually?

Peter Paul Aufreiter: All four at the mixer! And sometimes we argue about who is allowed to play what, which is then always very funny! Of course, this is then also exciting because many influences come together and results in a wild mix.

[…] The inspiration for the music comes more out of ourselves.

Where do you get your inspiration? Do you have musical idols?

Peter Paul Aufreiter: I have a feeling that inspirations develop on their own now. We no longer think: “I’m listening to this, that’s cool, let’s do that now,” instead the inspiration for the music comes more out of ourselves. When we make songs now usually one of us comes with an idea and then we work it out together.

Marten Kaffke: It’s always a group process – so it’s never been that someone comes up with a finished song and the others just play it. Each song is co-written by all of us.

How did you find your “Juicy Sound”?

Marten Kaffke: That was actually last summer! We spent a week in a courtyard in Mödling writing songs from morning to night. We were sitting outside in the sun, picking and eating berries …

Jeanne Nickels: And we ate a whole lot of watermelons!

Marten Kaffke: Exactly, and I feel this week has really manifested in the songs.

That sounds really idyllic! Jeanne Nickels, you prefer to sing in English and French – why not German?

Jeanne Nickels: Because I can not write in German. I write the lyrics and somehow they don’t sound good in German. Previously, I tried to write 50 percent in English and 50 percent in French, but then people asked me to sing more in English – I have tried to accommodate. Of course, it always depends on what I write! For some emotions French just fits much better.

[…] We always wanted to travel through many countries

As part of your NASOM promotion you’ve got a project planned called “11 Songs 11 Countries”. Can you tell what will happen?

Jeanne Nickels: Since May 31 we will be spending about a year traveling in 11 countries and writing eleven songs. In the centre of it all is the collaboration with artists in their respective countries – we want to exchange ideas with these people, sharing visions and writing songs.

Marten Kaffke: We want to experience the processes, infrastructure and the music production in other countries, to be mutually inspired by the collaborations. It is going to be exciting to see how the songs ultimately look and sound like.

Jeanne Nickels: We are reshuffling the deck! We have some countries chosen – sometimes we the four of us will be travelling and sometimes Marten and I will have a long-distance relationship with Peter Paul and Max, while we communicate through various media with the others and keep them in the loop.

In which countries will you travel, for example?

Marten Kaffke: Everything is already organised for 2016: We will fly to Israel in June, in July we will be in France, then in Germany, in September in Japan, in October in China, then in Taiwan, then we go to Australia. For 2017 we have planned a number of countries, including, for example Mexico, Brazil and Senegal.

You really will be flying around the world! Do you have your sights set on a few artists for collaborations already?

Jeanne Nickels: Yeah, right! A few are already set, such as in Japan – we will collaborate with TsuShiMaMiRe who are pretty crazy.

How did you come up with the idea of flying around the world to make music with other artists?

Marten Kaffke: We already had the project idea for some time. Eventually a bunch of different things came together in the project development. We’ve always wanted to travel through many countries, but not to just take a short vacation, but to get to know the country or the city really closer.

Jeanne Nickels: It was our desire to combine that with our passion of music.

Marten Kaffke: Step by step it went more and more in this direction. First the plan was to spend three to four months in one country and then again three to four months in another, which would have been favourable in terms of the cost of living. But with the NASOM promotion there was a chance to think a little bigger. In the end, more and more countries were added to the list and so the idea for “11 Songs 11 Countries” was developed.

Is there an album in the pipeline as part of this project?

Marten Kaffke: We are definitely planning on it. With eleven songs it just makes sense!