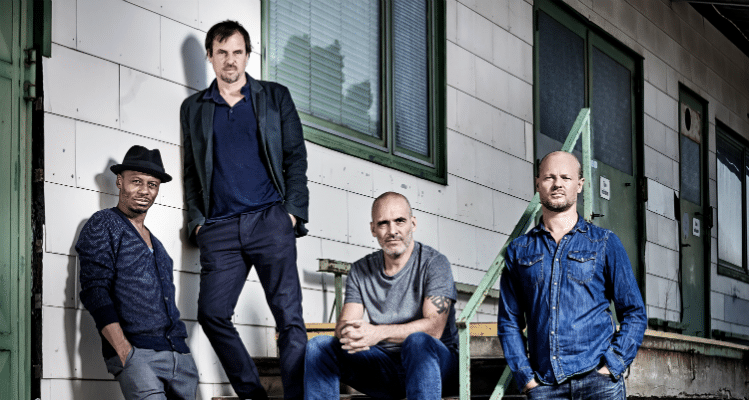 The SOFA SURFERS are 20 years old now. On October 6, 2017, they released a rather atypical anniversary album “20”. The album is more of a reference to their collected works than a Greatest Hits collection. Ada Karlbauer and Julia Philomena spoke with WOLFGANG FRISCH, MARKUS KIENZL, MANI OBEYA and MICHAEL HOLZGRUBER about the most important developments in the 20-year history of the band. In the conversation, we discussed JUSTIN BIEBER imitations, the visual collaboration with BRIGITTE KOWANZ, influences, changes, repentance, the present and the future.

You are now celebrating 20 years of band history – time to take a look back: What have been the most important artistic developments for you from your debut “Transit” in 1997 to the present day?

Markus Kienzl: In general, I think it is important to distinguish between technical and artistic or stylistic development. When we started in 1997, it was the golden age of the record industry, where you had to buy the music if you wanted to hear it. The further developments naturally also had an enormous influence on the music industry.

Michael Holzgruber: Technologically, of course, things have changed for everyone, but when we started, it was a different time musically. It was, as I personally think, sometimes more exciting, because a lot was happening at this time. Techno and Drum’ n’ Bass came up at this time, and that influenced us a lot. That’s one of the reasons why Sofa Surfers exist at all. We all came from typical bands and just wanted to experiment more. There was also a lot happening in club culture at the time. We wanted to process it somehow, do something with it and put it into a band concept. For the last 20 years, we have always tried to keep things interesting for us. So we tried something different on every album. For example, the red album of 2005 was very analogue and played live, whereas the last album “Scrambles, Anthems & Odysseys” of 2015 was completely electronic. As Markus said: “The technical and stylistic developments influence each other”.

THE LAST 20 YEARS WE HAVE ALWAYS TRIED TO KEEP THINGS INTERESTING FOR US.

Markus Kienzl: We don’t want to repeat ourselves. We try to be exciting and to stay exciting for ourselves. We’re don’t worry about how we can sell it to people until afterwards.

Wouldn’t it have been easier to find “your sound”, to define it, and then reproduce it successfully for the rest of your career?

Michael Holzgruber: I don’t think we’d be sitting here right now, then. When I hear a band say: “We’ve found our sound”, I always think to myself: “I don’t care what they do in the future.” What does it mean to “find your sound”? I find the idea of making a follow-up to an album, which is something you often hear, incredibly uninteresting.

Markus Kienzl: That’s almost as if you stopped your own personal development at 25 and wouldn’t get any older.

Michael Holzgruber: We all develop. In the last 20 years we have not only gone through a musical but also a personal development. We are no longer 20 years old and not willing to do the same thing just because it sold well or was cooler – we would be lying to ourselves.

IF NOTHING WAS EXCITING, WE WOULDN’T MAKE MUSIC ANY MORE.

What is exciting about contemporary music developments in Austria and abroad?

Markus Kienzl: Austria has been the focus of musical attention for some time now, especially abroad. The German-speaking hype around Wanda and Bilderbuch is of course exciting and we are also happy that more is happening again and that there are some bands that are having more international success.

Wolfgang Frisch: I find the developments in current pop music very exciting, and I’m quite happy to hear Justin Bieber singing. Right now there is a certain sound that, I think, comes a little bit from the tropical sound and appeals to me very much. There is enough contemporary pop music and electronic music that we find interesting.

Markus Kienzl: We need this excitement to continue. Production techniques also play an important role. It is important to look at what other artists are doing today, not to copy it, but to be inspired. If there was nothing exciting left, we wouldn’t be making music.

You describe the anniversary album with the appropriately-related title “20” as a “rework album” and “a step forward”.

Markus Kienzl: That simply refers to doing something we haven’t done before. It may also sound more current, include new tendencies, but it is above all a matter of showing something that has not yet been present in our work.

Michael Holzgruber: If we’re talking about pop, the second number – “Rising” – is already very poppy. It’s a bit of a risk, because we’ve rarely been so poppy. Maybe we’ll go further in this direction or at the next album we’ll go somewhere else, we’ll see. In general, the album should be retrospective because of the occasion, without seeming old and dusty. That’s why we didn’t really put the old original tracks on the album, but did reworks. It has turned out to be new numbers put into context next to old ones. At the same time, we always want to do something completely new. That is important to us for every new product we publish.

Were there any people or sources of inspiration that have always accompanied you?

Michael Holzgruber: Over the whole 20 years we have been our only constant companions [laughs]. I should say that our visual artist Timo Novotny, who is currently working on the visuals for our tour, has been with us from the very beginning. He is definitely a companion. I would also like to mention Wolfi Schlögl, who has accompanied us for 17 years and is still a good friend. You can say that there are some people in our environment who are always in the credits.

Markus Kienzl: But our inspirations have changed again and again. So these companions were the only real constants.

Should the pop-approach mentioned above address a new fanbase?

Michael Holzgruber: I think you always want to open up a new audience, even if you don’t talk or think about it, but of course you are happy when other people join in. Our audience has grown with us, but of course there are always younger people at a concert.

Markus Kienzl: But this is a side-effect. We don’t really worry about these things during production.

So for the next album, should we be prepared for the Sofa Surfers as sound and style imitators of Justin Bieber?

Wolfgang Frisch [laughs]: It would be nice.

Markus Kienzl [laughs]: If it happens. Everyone can make his or her own thoughts about this. We’d have to take different press photos.

Michael Holzgruber: We aren’t really a boy group that appeals to twelve-year-olds because of their style. Our music has to be convincing [laughs].

The visual component is still essential for the band in the form of visuals even after two decades, isn’t it?

Markus Kienzl: Yes, it is very important. In general, we are quite close to film music and music that can accompany pictures. Our biography already includes a number of films and this is definitely a genre in which we would like to continue.

Michael Holzgruber: I would also like to emphasize here that in 1997, when we started, none of this was standard. I don’t mean to say that we were the pioneers, but visuals with live band were more common in the club scene back then. We took it out of the club context.

How would you describe an ideal audience?

Wolfgang Frisch: Ideally, it would be an audience that would understand exactly what we are doing. However, this ideal case does not exist. Anyone who just wants to get played at is warmly welcomed as well. I think we put a lot of effort into the details and we are happy when someone recognizes it.

Markus Kienzl: But of course you shouldn’t be so self-sufficient, but vice versa. It’s an exchange and we are well aware that it needs to work this way.

Michael Holzgruber: But people who stand with their backs to the stage are the worst.

The artist Brigitte Kowanz is responsible for the artwork. It is an excerpt from this year’s installation at the Austrian Pavillon at the Biennale di Venezia, “Infinity and Beyond”. How did this cooperation come about?

Michael Holzgruber: Timo Novotny made a documentary for Brigitte Kowanz about the Biennale, because she represents Austria in Venice. He then sent me works from her and I in turn saw one of her works at the Natural History Museum in Vienna and sent it to him. So we came to the conclusion that we are both interested in it. Brigitte Kowanz then provided an excerpt of her work as artwork through a contact. We are very happy about this crossover.

Markus Kienzl: The whole thing also makes sense for the anniversary, because we’ve always known people at the University of Applied Arts in Vienna with whom we have done visual collaborations. That has remained so to this day.

One last nostalgic look back: Is there anything you regret not having done?

Wolfgang Frisch: Musically, I would say that we don’t regret anything. The fact that you want to change a lot in retrospect is nothing special, it probably happens to everyone. I’d say we could have paid more attention to the business side of things.

Michael Holzgruber: We got a late start doing that and we were a little naive. Now you have to do it. Every band should have a clue about it, including social media. I would have regretted it if we had done something only for financial reasons, but that never happened, so I can still look myself in the mirror.

Markus Kienzl: Our own narcissism was always stronger [laughs].