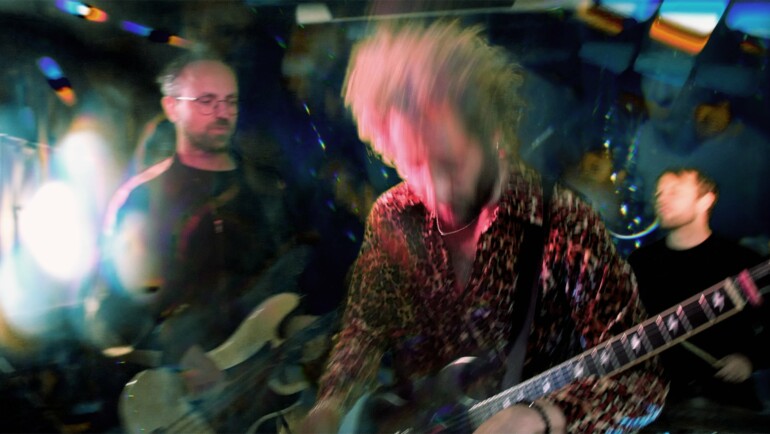 ELEKTRO GUZZI recently released their second album within one year. With it, BERNHARD BREUER, BERNHARD HAMMER and JAKOB SCHNEIDEWIND level out the repetition in the repetition. At the end, the bass whistles in the loin. Everything sounds different. And the eye listens along. Why they lack the pop appeal so far, how Chilly Gonzales could help with that and why the old record is a new start, the three Guzzis discuss in their rehearsal room with Christoph Benkeser.

Your ninth record has just been released. The conclusion: Techno hasn’t become boring for you yet.

Jakob Schneidewind: Well, there is a lot of boring techno.

Bernhard Hammer: But you played Rrose earlier for me, they make a really interesting sound that moves away from techno. One of the first to experiment in this direction was also Efdemin – his sound went in an electroacoustic direction, which he transferred to the club. I perceive this claim to bring the abstract back to the dance floor.

Jakob Schneidewind: At the same time, there are just a lot of records coming out because most artists haven’t been able to tour lately. We noticed that in the promo for “Triangle”: getting attention is difficult. The pressing plants are at their limit. There is oversaturation on all corners. We still want to keep going because we have new ideas all the time – that’s why we’re making a new record.

Bernhard Breuer: It’s not that we had to make one.

Jakob Schneidewind: People are not screaming for a new record from us. But we want to continue. Besides, we’ve reached a point where we could – at least in theory – make two albums a year.

Bernhard Hammer: Our last one, “Trip”, came out last June. After that we were able to play gigs, which wasn’t the case at all before that due to the pandemic. That’s why “Trip” came out of a kind of dry spell, while “Triangle” comes much more from our practice.

Which was the case before Corona, right?

Bernhard Hammer: The records emerged out of playing live, yes.

A year ago, you told us that you don’t record your rehearsals anymore. That was a turning point, because …

Bernhard Hammer: … we could be more in the moment.

Jakob Schneidewind: On both “Trip” and “Triangle”, we didn’t reproduce much, but almost exclusively improvised and selected the best pieces afterwards.

Bernhard Hammer: However, with “Trip”, we had pieces that served as a starting point and after 20 minutes led us to something that could end up on the record. With “Triangle”, we played more from our gut without a specific aim.

Jakob Schneidewind: That matches our live character. We go on stage bare and improvise, a way of playing which we discovered over the course of the past years. Thus, the interaction in the improvisation is in the foreground.

Conditioned by blind trust in one other; you’ve been doing it in this constellation long enough.

Bernhard Hammer: Yeah, since we had our first gig in 2005 at Fluc – in the small container!

Bernhard Breuer: There wasn’t even the canteen then. Before us, Karl Kilian played as DJ Kosmoprolet.

That was a long time ago.

Jakob Schneidewind: Most recently, we’ve been working in collaborations, recording with trombones, and experimenting with a string orchestra. We also had a project with Ingrid Schmoliner. Both “Trip” and “Triangle” were again about performing as a trio. That is the essence of our collaboration.

Bernhard Hammer: In the meantime, we have built up a structure through our own label – we can record and mix ourselves – so it’s tempting to make a new record quickly. We curate ourselves, can act from within, and are independent. At the same time, we have to learn to incorporate the outside perspective into what we do. Otherwise, it becomes too much.

Jakob Schneidewind: I still think it’s good that we can make and release a record. It’s not our aim to make a blockbuster, anyway. That time has passed in the underground scene. We want to get our music out there and serve our fanbase – no matter how big it is.

By now, you have been releasing on your own label Palazzo for several years. Before that you released on the German label Macro, in between also on Denovali.

Bernhard Hammer: With Macro we had almost only good experiences, they valued curation, which could lead to longer discussions, especially in artwork questions. Denovali was finally the reason to start our own label. They ran the record into the ground at that time. After that, we didn’t want to have anything to do with them.

The step into independence goes hand in hand with a departure from the mainstream. Was that ever a goal?

Bernhard Hammer: It never happened. We played at huge festivals for a while, but …

Jakob Schneidewind: The mainstream never worked out with our music. It’s too abstract; the pop appeal is missing.

You could have opened up to that. That never happened.

Bernhard Hammer: We had no interest in that. I was at an Apparat concert a year ago – I listened to it from outside at some point, because one pop tear-jerker after another came on.

Bernhard Breuer: But we don’t have a fundamental aversion to pop. We just haven’t managed to produce it yet. It would have to happen in a way that we like. That’s difficult because we’ve developed a language within which we understand each other. We would have to develop a new one, and we haven’t dared to do that yet.

Because Elektro Guzzi can’t be condensed into three minutes, but needs the duration of the set to draw an arc of tension?

Bernhard Hammer: At the same time, we would have to work it out.

Bernhard Breuer: Also because I have great respect for people who write good pop songs – even in the techno field. GusGus produce absolute pop kitsch, but in a way that works.

Jakob Schneidwind: For that you would have to start your singing lessons – at least for the head voice.

Bernhard Hammer: We would just have to watch the masterclass videos of Chilly Gonzales. He explains exactly how it works on the piano.

Bernhard Breuer: With us, it was more like this: We discover something, formulate it and at some point we can’t get further.

Bernhard Hammer: We haven’t gotten past the point where we only touch upon pop yet.

Because the loop is a safety net for you?

Bernhard Breuer: Well, our language serves a different function than a pop song. For us, it’s more about how rhythm and sound intertwine. That works better with an experimental approach than via classical schemes. Besides, there is still enough to discover in it. We could spend the next 100 years with this one shitty groove we’ve been playing for 15 years without getting bored.

Bernhard Breuer: It’s still ritual music that touches everyone. That’s why techno has become so big again in recent years.

Bernhard Breuer: Absolutely. I don’t hang out at raves anymore, but when I listen to what’s being released … It’s pretty fast.

“WHEN WE GET OLD AND UGLY, OUR MUSIC GETS WORSE.”

In that sense you stay true to the past.

Jakob Schneidewind: Because it’s the sound we want to make as a band. It has a different quality than if we just plugged in a USB stick.

Bernhard Breuer: That’s why at gigs we were often approached by people who said, “I don’t normally like techno, but I like listening to you guys!”

Bernhard Breuer: People see our performance and connect their imagination with our instruments. This makes techno more tangible.

Bernhard Hammer: The eye listens along. As soon as you don’t like something visually, it doesn’t sound good anymore.

Bernhard Breuer: That means: When we get old and ugly, our music gets worse.

At one point, there will be only robots on stage.

Bernhard Hammer: That was always our vision. Once, we even played behind a screen – we weren’t meant to be seen.

Jakob Schneidewind: That’s the idea of the original Detroit techno. That’s why, in the beginning, many people hid behind masks or disguised their identity in other ways – an idea we have a lot of sympathy for.

Meanwhile, people do it with a different intention.

Jakob Schneidewind: Yes, it has become a gag. But in its origin, for example in Underground Resistance, it had a political message.

Which brings us to the question of whether techno can still be political.

Jakob Schneidewind: The energy that resonates in electronic music is still there. However, techno has differentiated itself. On the one hand you have commercial IDM, on the other hand there are labels like Nyege Nyege from Uganda, which transport the initial spirit in a radical sound aesthetic.

Where is “Triangle” headed in this regard?

Bernhard Hammer: That’s not so easy to answer. First of all, the beautiful cover by Inga Hehn certainly stands out – she works minimalistically and with ink. Also, the album title “Triangle” is in focus.

The naming of the pieces has become more important than before, you said during our last interview.

Bernhard Hammer: That was the plan. We want to establish, through the names in advance, in which direction we move, sound-wise.

Jakob Schneidewind: But the intermediate step back to the trio consisted of three EPs that we produced independently. They had angular names, which was …

What about the future?

Bernhard Hammer: For “Triangle” we played with the drum sound in particular. It should get an acoustic layer – sound less electronic. That’s a path we’re consciously taking.

Jakob Schneidewind: On “Trip” it was more of a wall of sound – now, we want to work out the details more.

Bernhard Breuer: I have dealt with the miking, recorded the room with ribbon microphones, which I positioned one and a half meters away from the bass drum. This gives the sound more air, it becomes more transparent and captures a stereo image. I therefore have the feeling that “Triangle” is the start of something.

Every beginning is a new end. Thank you for your time and till the next record!