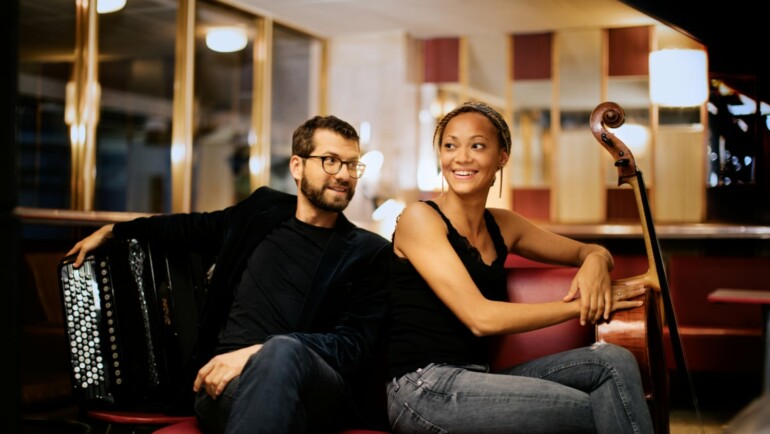 From classical to jazz to pop, tango and soul – the music which the two virtuosos, MARIE SPAEMANN and CHRISTIAN BAKANIC, used to create on their own, have since united and been making the most of it on two (-and-a-half) instruments. They achieve a decidedly varied mix, which they already recorded on their first joint album “Metamorphosis” at the end of 2020. In this interview with Sophia Umfahrer, MARIE SPAEMANN (cello, vocals) and CHRISTIAN BAKANIC (accordion) explain how one plus one equals two, which musical colors are packed into their sound, as well as the challenges and the strengths of the duo.

You’ve been performing as a duo for over two years now. How did you decide to collaborate, since you actually come from very different stylistic directions?

Christian Bakanic: We met in a band of Christoph Pepe Auer, who plays the saxophone. He was looking for very unique musicians to put together a rather illustrious band.

Marie Spaemann: That was already five or six years ago. So, around that time we started playing together. We thought it would be cool if we tried out a few things together.

Christian Bakanic: Especially to “beef up” our solo material a bit, you could say. Or to try it in a different version. Marie already had a solo album at that time, or, actually, it was just in the making…?

Marie Spaemann: Exactly, I had just released an EP and Christian also had his solo tango program. But we were curious about what we could create as a duo. We have a lot of different influences, as you say, and it took a while until we found our sound and released our album together.

Christian Bakanic: But it paid off. The very stress-free way of trying things out and just playing…

Christian Bakanic: … also concerts, but nothing under pressure, nothing forced, we just let it flow – and this turned into a very beautiful CD!

So, you were sort of “thrown together”, each of you brought your own material and then you combined it – and it obviously worked well, right away.

Christian Bakanic: I think, even if we had played in another project, we would have tried it. At some point our paths would have crossed in the music scene in Vienna. I’ve always loved the cello and accordion format, and I’ve always played with cellists, so I thought it would be a great fit. And the extension with vocals is just unbelievably great!

Marie Spaemann: The very fact that we both think of our instruments somehow differently is also a unifying element.

Christian Bakanic: Trying out our own solo stuff in a duo – that was the first step, the first approach. Then, with time, we started to compose together. And, in addition, we had 2-3 cover versions, Piazzolla, a Tango etude, which Marie played solo, and we jammed a little Bach.

Marie Spaemann: We quickly realized that we both share a love of tango and a love of Bach, and we played around with that a bit.

Would you say that Bach and Tango are your common denominators?

Marie Spaemann: I think there are more! That was also the challenge, that there are so many. Because we both also like to listen to hip-hop stuff.

Christian Bakanic: Hip-hop, funk, soul, R’n’B we both like to listen to stuff like that in the car. Also, old music in principle, so not only Bach, but also Vivaldi, Monteverdi…

Marie Spaemann: And Sting and jazz. A lot of jazz! Christian even more, of course, because that’s more his turf than mine. But I also listen to jazz very much and that has certainly influenced me.

Having a lot in common seems to make working together a lot easier at first glance, but as you indicate, it’s not quite that easy. What was the biggest obstacle at first?

Marie Spaemann: Finding our sound. Precisely because we love so many styles, finding out what it is that appeals to us. Also, finding out what’s interesting about the accordion, the cello, and the voice. To realize that on the one hand, we want to make these soulful, almost poppy songs, which always have jazz elements in them, and on the other hand, we also have this chamber music color, in which we also play a lot of tango, tango nuevo.

Christian Bakanic: The challenge is to arrange that together, which, in and of itself, is not difficult, but it takes energy and time. But it’s also fun to rehearse and work on the sound.

Marie Spaemann: And writing together, that also takes time. That’s where we are now.

Christian Bakanic: But we have both played a lot as solo artists, I have to say. Marie has already experimented a lot with cello and voice in her solo program, which she brought with her. I have also been in the music business for 20 years and am constantly working on my sound as an accordionist. So, it was easy again, because we both already brought a lot to the table.

“There’s always an interplay between reality and utopia”

No one gives the direction, but you decide together where it goes.

Marie Spaemann: The convenient thing about the duo is that one of us always has an idea. We work together a lot, but the impulse always comes from one of us. During quarantine, this became especially evident. One of us had an idea or a text and a melody, or whatever. Then, we’d send it back and forth to each other, and when we could meet, we’d keep working it out together. We definitely had ‘more time for creativity’ during lockdown. So, we started writing with each other in a way that we didn’t do before because we just didn’t have time.

Christian Bakanic: In rare cases we have developed an idea together at the same time by listening to music, that also happens. But Marie often has the lyrics or the melody and sometimes I just come up with chord snippets and you can really put that together nicely in a duo. It’s really much easier in a duo, because you can decide and act faster, and be more flexible. I have also played in bands. In a larger band, it is also totally exciting, but there it really makes sense to have one person who gives the direction.

Marie, what is the core of your lyrics?

Marie Spaemann: In my lyrics, there’s always an interplay between reality and utopia. That’s what excites me most about writing.

“The strength in the duo is the intimacy and this diluted, reduced notion”

What’s great is how you get the maximum variety out of simplicity, both on your instruments and in the range of styles you incorporate into your music. Is that where the fulfillment lies for both of you? Or is it something that consciously sets you apart from others or from what you are used to?

Christian Bakanic: Right now, it’s a conscious decision; it may be that we want to add electronic elements or other instruments at some point. The strength in the duo is the intimacy and this diluted, reduced notion. I think we have both recognized that and Marie has already recognized that in her solo playing.

Marie Spaemann: Yes, we came to the conclusion that although we are extremely into groove and pop, we still have this background in classical music, and we enjoy pushing our instruments as much as we can in chamber music and trying out colors before we add anything. For example, we consciously decided against the loop station, which I use a lot solo.

Christian Bakanic: I would also play synths or keyboard, but that would a body of sound that does not fit now. So, our basic sound is more classical, natural, woody, although the cajon actually fits quite well with that. Now and then a little groove comes out of it, which Marie does on the cello. But we have decided to play acoustically for now.

Marie Spaemann: So that it’s homogeneous.

Christian Bakanic: It is very reduced and minimal, but then it becomes virtuosic at times. That’s what people often tell us. You notice that you are classically trained and that you are virtuosic with it. That means we try to bring in this color, because it is part of both of us. And because it makes sense. We both think it’s good when things are varied. So, it’s nice to have, for example, 4 minutes of very fine and quiet sounds and in the next moment to bring surprise effects, so that it grooves again.

Marie Spaemann: Yes, and we just want to play our instruments…

Christian Bakanic: … to the fullest…

In any case, you seem very authentic, both individually and together. With your debut album you set the bar pretty high and didn’t hold back in terms of variety and surprises. But that was a while ago. What has happened in the meantime? Are you already building on that?

Christian Bakanic: We already have quite a lot of material again.

Marie Spaemann: We already have the second album in mind!

Christian Bakanic: But we are not in a rush. Next year we will certainly still play the old album, we also have many requests, but we are already developing a second program.

Marie Spaemann: A lot of the new stuff is actually already part of our live shows.

Christian Bakanic: But it will certainly not be easy. The first record turned out well. We are proud of it. But the second one is always difficult, I think.

Yes, especially if you’ve already put a lot into the first one.

Marie Spaemann: I have the feeling that because we, as a duo, have really given each other a lot of space in our development from the very beginning, it will be very easy with the second album. Because there is already material.

Christian Bakanic: There are already very nice numbers and good material – we think, at least. Who knows how it will be received [laughs]. But we are looking forward to it! Still, it’s always a challenge to stay on the ball because people always want to be surprised. That’s the difficult thing in our world and as artists in general.

Marie Spaemann: That’s true. But the bottom line is that you should always do something that you would enjoy, yourself. I think that’s the best method. Something that you, yourself, would really enjoy when you hear it on the radio.

Christian Bakanic: That, and expressing where you stand right now, or what you want to say.

What do you wish for, for your duo?

Christian Bakanic: A second record that can inspire and fulfill us as much as the first.

Marie Spaemann: Maybe it’s a strange wish, but I would also like it to continue just as it is, in a certain way. Because the development of this duo is extremely in sync. It was somehow like that from the beginning. You don’t know how life will go. But that it could happen like this is a great gift and I would wish that it can continue to develop like this. And of course, that the second record will be a hit! And that the stages become bigger and bigger!

Thank you very much for the nice conversation!