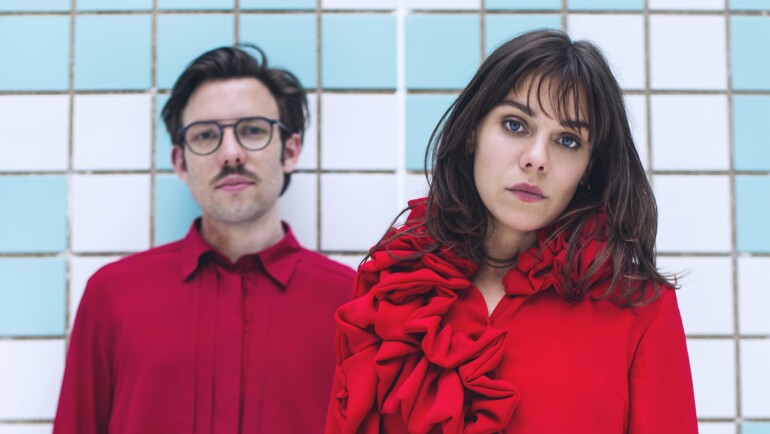 MARIO and GIOVANNA FARTACEK (aka „MYNTH“) have already impressively proven on their two previous albums that they are masters of electronic pop with a sophisticated and above all individual touch. “Shades I Mynth” (Assim Records), the third work of the twins from Salzburg, has been released in November, and, as expected, it once again offers wonderful music. In an interview with Michael Ternai, GIOVANNA FARTACEK spoke about the band’s decision to dump an album that was actually already done, about the search for a new sound, and why their kind of pop is a bit more unusual after all.

Listening to your new album “Shades I Mynth”, it appears that your sound is somewhat more expanded now, although it seems to me that you have approached the making of the album in an even more downscaled way than before.

Giovanna Fartacek: From album to album it became more and more clear to us that we really appreciate electronic sounds and want to continue working with them, but at the same time the desire to return to our roots had grown in us. Mario is actually a guitar-player and we both played in various other bands before Mynth. So the decision to go into this direction was not that unusual. We simply wanted a more organic sound for this album and for this reason we moved the guitar upfront again, yet at the same time using it in many different ways. Many sounds of the guitar are not really perceived as coming from a guitar, but rather as a synthesizer-tapestry of sound. But it wasn’t that we wanted to completely reinvent ourselves, one should still be able to comprehend our entire musical development up to now.

In any case, the whole process of creating the album was a long one, almost two years. One reason was that we had an album ready relatively soon, but then dumped it and started all over again. We just weren’t satisfied with that first attempt, it just didn’t feel right to us.
The key song that led us into the right direction was “Laurel.” It was the piece where we really brought the guitar in for the first time, which gave it that special Bowie-esque vibe, and we simply liked that a lot. I would say that the new songs are still melancholic, but at the same time, they are lighter and livelier than before. That was important to us.

Hearing the songs, one notices that you have worked on them and tinkered around with them for a long time. The sound is generally very much broken down to the basics. It’s a bit reminiscent of Portishead in terms of mood.

Giovanna Fartacek: Portishead is a band that has definitely influenced us in the past. It’s the kind of music we like to listen to, as well. But we definitely are not choosing a performer as a template for how we want to sound. And it’s always about conveying a certain mood and finding a garment of sound in which we feel comfortable and which fits us well.

Giovanna Fartacek: I think it’s because of some synths that have a very significant sound and trigger those vibes. But again, that wasn’t a conscious decision.

Your first two albums were very successful and opened the doors to the international realm for you. To what extent did you feel a pressure to fulfill any expectations this time?

Giovanna Fartacek: I think for many musicians the third album is a kind of key album. And we too had the feeling that with this album the next step had to come. That’s why we actually put a lot of pressure on ourselves at the beginning, which, as it turned out, was not a good thing. After we had dumped our already recorded album, we decided to first take a step back, to find out what direction we actually should take. We consciously took our time to do that. Our goal was to make an album that we would enjoy listening to again and again. As it turns out now, this path was the right one. We get a lot of positive feedback from people. Many think that the songs are doing something to them, that they like them because one can listen to them in very different moods. No difference if you aren’t in a good mood or if you’re happy. In any case, I can say for myself that I rarely have been so cheerful inside as now after this release.

What’s interesting about your music is that although it’s pop music, it doesn’t follow its rules.

Giovanna Fartacek: I think we’re simply writing intuitively. I need a certain mood when I’m writing, I just can’t sit down and write a song, especially not following a certain scheme. That’s not the way we write. For us, songwriting is very much guided by our feelings, which I think also prevents us from constricting ourselves. We aren’t thinking about whether a hook is catchy, for example, or that a piece should last only three minutes to be played on the radio. We are trying to preserve as much of our freedom as possible. That’s probably also the reason why our songs rarely correspond to the classic pop scheme. We simply want to make music that comes out of us and aren’t having an eye on the fact if it works or not on certain platforms.

“EVERYTHING ELSE HAD MORE PRESENCE THAN THE RELEASE OF OUR ALBUM”

Now this year has been a very difficult one for everyone. How much did the situation influence the album?

Giovanna Fartacek: The album was basically ready before the crisis broke out. In the end, only two songs were added. From that point of view, the crisis didn’t have too much influence musically speaking. But what we briefly considered was, whether we shouldn’t perhaps postpone the release until next year. But we didn’t do that, or rather, we just pushed the release date back by three months. The original plan was that the album would have been released in September.
Of course, we would have wished for a different course of events. Especially because we now have an album that we are incredibly happy with. But many things happened: in the week of our release there was the terrorist attack in Vienna and the elections in the USA. Everything else had more presence than the release of our album, so I just told myself that it didn’t matter anymore anyway.
We didn’t have any great expectations. We knew that we have a beautiful creation here that we just want to share with people. Being relaxed about it, it was really nice to take in the reactions. Maybe the lockdown has something positive in that people have time to listen to music again and consume music or art more consciously.

How much does it hurt not to be able to present this record live?

Giovanna Fartacek: That is bitter, of course. Hopefully, there will be a tour next February – in whatever form. Playing concerts is something we are really missing very badly. On the day of the release, when we were supposed to have a big show at the WUK, we sat at Mario’s house and listened to the new record on vinyl together for the first time, over a glass of wine in the studio. Of course, that’s not how we had imagined it, but that’s fine, we celebrated the release that way.

Giovanna Fartacek: Mario is a full-time producer. He has a lot of other productions going on at the moment, so he’s very busy. Which is great, because he also makes a living from music. I myself am spending a lot of time now writing my solo album and hope to be done with it by the end of the year. From that point of view, the time now is fine for me anyway. I need sparks of loneliness and of this oppressive mood to write songs. Then I can be creative [laughs].