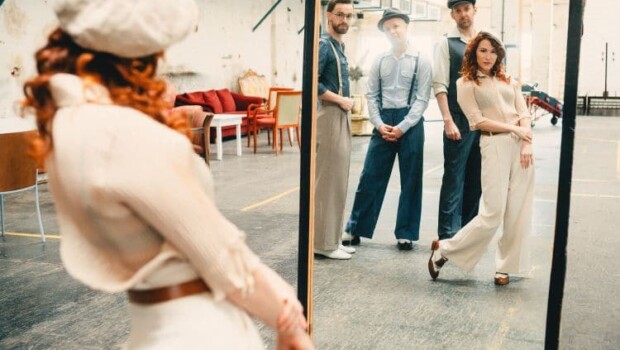 If you talk about swing music in this country, you can’t avoid mentioning this band. MARINA & THE KATS have been considered the leading figures of this genre for years now. Three strong albums with music that invites you to dance to every note, and several concert tours across the continent, have turned the group, centered around singer MARINA ZETTL and guitarist THOMAS MAUERHOFER, into an internationally sought-after act. With “Different”, the band, now a quartet, released its fourth album this summer. And as the title suggests, things are a bit different on the new release. Not only do MARINA & THE KATS now perform with three drum-sets – played by three out of the four band members – but they also break new musical ground. The new songs sound surprisingly raw and show a much wider stylistic range than before. MARINA ZETTL reveals in the interview with Michael Ternai, among other things, how this very diverse sound came about and what the “shared drums” are all about.

In the press release for the album, it says that corona was actually the reason it came into being. Was it actually planned beforehand?

Marina Zettl: Yes, an album was already planned. But the fact that it happened so quickly was actually a result of the situation. Since it was not possible to play concerts, there was simply suddenly time to tackle it. Looking back, we can say that this forced break also had positive effects for us. We could really think about what we wanted and in which direction it should go. We came to the conclusion that this time, more than before, we also want to incorporate what we are listening to at home, that is, the music we are listening to privately. Our previous albums were musically still strongly rooted in classical swing. We wanted this to be different this time. We wanted to break it up a bit and leave the traditional path. I find the swing of the 1920s and 1930s very beautiful, but at the moment I’m listening to something else at home, like The Black Keys or Jack Stauber, I thought -why can’t you actually combine these two things?

What makes “Different” a bit different from your previous albums is also that it is – especially in terms of stylistic orientation – very broad this time. Swing, indie pop, jazz, funk, a bit of Django Reinhardt, somehow everything can be found in your songs. What led to this very diverse sound?

Marina Zettl: It’s always interesting to hear what others are thinking about your music, or what they hear for themselves. I, for example, have no connection to funk and don’t feel that way. About the sound: For many people the word “swing” means either a. traditional sound à la “Ella or Django” or b. “electro swing” – and both are not the world in which I position myself musically. We have found something of our own that lies somewhere in between, and that’s exactly what gives us the freedom to do whatever we want and think is good.

The sound is also a bit rougher than before.

Marina Zettl: I think so too. Rougher, coarser and more direct.

I THINK IT’S OUR STRONGEST ALBUM SO FAR

Was it clear to you from the beginning where you wanted to go musically on this album or did this broader sound emerge gradually?

Marina Zettl: The desire to musically develop something is always there for us anyway. But you can surely say that this time “Different” was the program from the very beginning. I think it’s our strongest album so far.

One also gets the impression that, this time, you have gone deep into the songs, and you really paid attention to their elaboration. What was “different” about the production of this album?

Marina Zettl: On the one hand, there was definitely more time to pre-produce and rehearse the songs before the recordings. On the other hand, we changed producers. And the lyrics are more serious and even more personal. One could even say, , they have also become a bit more adult… whatever the word “adult” means (laughs).

You worked with Andreas Lettner for the first time on this album. How is his input as a producer noticeable?

Marina Zettl: Thomas Mauerhofer and I have always had very concrete ideas as leaders, but we also always wanted someone as a producer who has a new perspective and his own ideas. Andreas Lettner quickly understood this and recognised where our strengths lie and how we can grow as a band. He also encouraged us to develop our trademark, the “shared drums”, even more and to get this seal of approval from a great drummer was half the battle.

With “shared drums” you have now mentioned a keyword. Harald Baumgartner is now also on board as a permanent band member. What is the challenge when you play with three drums? I imagine it’s not very easy, especially as far as timing is concerned.

Marina Zettl: Before, the rhythm section consisted only of Peter Schönbauer on bass drum and me. Now Hari is a permanent member of the band and three out of four people play drums and, together, are responsible for keeping time. Of course, this doesn’t make it easier and we spent a lot of time rehearsing, but exactly this peculiarity has become our trademark and we wouldn’t want to do it any other way.

What about the content of the album? What themes are you singing about?

Marina Zettl: It is always important to me that the songs have a personal story for me, but at the same time remain open enough for the listener to find their own access and thus find themselves in it. Good lyrics work on several levels.

The title track “Different” is about how hard it is to follow your own intuition, especially when there is a lot of input from outside. You can relate that to many life situations. In my case, for example, outsiders often think they know what you should do better or differently. And that’s what you often hear. And yes, that happens to me sometimes too. I don’t exclude myself here. “Quiet” was the very first song that was written during the lockdown and it’s about the thought of whether you still have something to say or whether there’s only silence left – actually the processing of writer’s block. Also, the topic of “being a woman” is playing an increasingly important role for me and I’m getting better at defining my boundaries. When I think about it, it sounds now as if it’s an accusatory or heavy record, that’s not the case. I can also confidently say: I like myself/us the way we are, with all our tics and quirks.

I have known you since your debut. And if one looks at the way you have developed since then, one can definitely say that it was very successful. You are on the road a lot, both at home and abroad, you are getting airplay on the radio, you have appearances on TV. Could you have dreamed at the beginning that your band career would develop like this? What do you have in store for the next few months? I assume that you will be playing many concerts again.

Marina Zettl: We just came back from our Hungarian and Swedish tour and generally can look back proudly on the last few years. Nobody can know in advance if something will work out and if you will survive the first euphoric year or not. And I would never have thought that I, as a singer, would become the drummer in my own band. That’s why we are especially happy that we have grown by our own efforts – i.e. without any big institution behind us – into a band that is to be taken seriously and can hold its own next to the big players. THANKS to all the Kats for that!