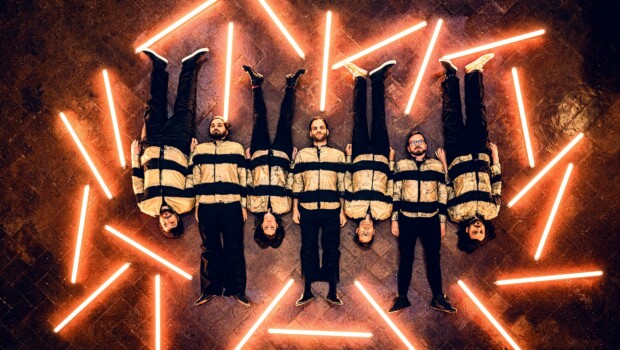 Since its birth in 2016, the septet SHAKE STEW successfully and unwaveringly holds the course of a unique sound creation. Currently the band is back on tour with their now fifth album “Heat”, which will be released at the end of March. Bandleader LUKAS KRANZELBINDER in conversation with Sophia Umfahrer.

You are actually already in the middle of your release tour for the new album “Heat”, just on the way back from Munich. How were the first concerts for it for you?

Lukas Kranzelbinder: Great! We had two concerts in a row at Jazzclub Unterfahrt, both sold out and it was a great atmosphere there. In fact, I was curious to see how it works when we play a complete concert with the new pieces, because, generally, we mix the program with existing material. But this weekend I wanted to try only playing stuff from the new album.

That’s exciting, of course, because you don’t have such a routine yet. But it’s also quite good, because that way everybody is kind of on their toes, fully involved, and has to concentrate completely, so that everything works. It seems to me that we have created quite a high level of energy in our playing. And yes, the audience got pretty excited, which was great!

The breaking or blurring of the boundary between stage and audience has happened pretty instantaneously. But if the music and you, as a band, feed on the involvement of the audience and the live situation itself, what new challenges have you faced in the recent past, where gigs in front of larger, physically present crowds have been rather rare? Or have new doors possibly been opened for you there?

Lukas Kranzelbinder: That really depended. We had relatively many concerts last fall under very different conditions, because the situations were different in all countries. But what was extremely noticeable was the unbroken energy and enthusiasm of the people. Also, that in some cases even more enthusiasm arose in individuals, who then more or less compensated for it, when only 50-75% of the people were admitted. The big challenges were definitely the travel situation and the preparations. It’s become a lot more complicated and, above all, it’s brought a lot of extra work. Planning everything is still an extreme, also bureaucratic, effort. Although everything is already changing a bit, you have to constantly look at where what applies, in terms of measures, and that everything then works.

You are known for your especially high-energy sound. Do you bring it out even more in “Heat” – setting the tone for the return to the stage – and has it become even “hotter”, so to speak?

Lukas Kranzelbinder: You can definitely see it that way. For me, “heat” is a term that best describes that feeling that arises when you play together – not only on stage. This interpersonal feeling, when you really dive into the material. This heat that arises when it grabs you and takes you away. But that is actually something that happens not only with full power, loud, fast, energetic pieces, but that also happens quite often with these very quiet, trance-like moments. For example, yesterday and the day before at our concerts with the last piece, which is very quiet, it actually totally created such trance moments, with all of us. A few from the audience also said that they were completely taken away and that it had somehow triggered something in them. And that really describes it. So it’s not just an indication that everything is going to burn down now and that even more power is coming. Rather, it is a word that should describe exactly this situation or this feeling in more detail.

So it’s a kind of take-away, or as I experienced it, a relaxation and the ability to let go…

Lukas Kranzelbinder: Yes, exactly, a kind of immersion. When it hits you and you want to submerge in it, that’s “heat” for me. That’s somehow a good term for it.

That also describes the emotional essence that you want to convey?

Lukas Kranzelbinder: So conveying emotion is always something interesting, because in my opinion you can never plan which emotion you will trigger in the other person. So clearly you never know which piece will evoke which emotion. That is always something personal. You can only start from yourself, and for me it’s like this: if something moves me and I notice in my stomach that something is happening, I bring it along and then we play the number. Often it is then so that it brings out a similar feeling in the audience. But of course there are also moments where something completely different arises in the people, and that is also very exciting.

Is “Heat” a continuation of the previous albums or does it still carry the same roots, and where would the musical branch reach with it, so to speak?

Lukas Kranzelbinder: After our concert in Munich, a journalist from the Süddeutsche [note: German newspaper] said that there is actually hardly a band that has such a strong signature sound as Shake Stew. So he would know immediately when listening to it,“that’s the band!” And of course that’s a very big compliment. I think in that sense it continues on the new album, that that core sound of the band is just already there. Nevertheless, there’s a lot of different new layers that occur in this album. It’s already a further development and a further step. For me it’s always important that new albums don’t replace the old ones, but complement them. It’s another facet of the group, so to speak, and there are just so many facets in our lineup, which is totally nice. I think that’s also the reason why there are now already a total of five albums in this short time. There are so many ideas, so many possibilities to work with. So a CD format is then mostly not much at all when the numbers are so long. But I think there are definitely a few pieces on the new album that open up a new world of sound that hasn’t existed in this form before. That makes me very happy.

Is there a specific background that you guys impart? A basis?

Lukas Kranzelbinder: At least not consciously planned out, because as I said, what music conveys cannot be planned. I’ve actually always had this vision that people take our music and “use” it for themselves. “Use” under quotation marks, because there is often such a negative connotation to it. But I actually mean it in a positive sense – that they take it and make it what they want out of it for themselves. That’s the beauty of it, because I don’t want to plan what meaning an album should have for someone when they listen to it, or what someone should imagine it to be. I wouldn’t go that far. I think there are some strong emotional moods on this album already and rather I’m excited to hear what it does to people.

You have recently supplemented, or rather changed, a little bit. Your new band member, Astrid [Wiesinger], mixes up your sound and energy a bit more. In what way have you changed and developed?

Lukas Kranzelbinder: Our band has always been about this mixture between a very strong group energy and strong musical personalities. It’s actually a contrast, but it works totally well together, because everyone shapes the sound of this band through their playing. It’s the same with Astrid. When she joined, she opened such a natural source of energy and sound, and a new door. I think I can speak for all of us when I say how insanely inspired we are by the way she plays. She is such a great saxophonist. It’s exciting for me in that we actually haven’t known each other that long. I didn’t really play in any band or so with her before Stake Stew, and she brings aspects to my own music that I haven’t heard before. I’m extremely grateful for that. Additionally, it’s also a very good fit energetically. We are very much on the same wavelength. From my point of view, Astrid is also a very physical type, as in, like me, she feels the music very physically, likes to be carried away and sinks into it. That’s totally nice when you can share that on stage.

Where does it go from here? Do you have certain expectations for yourselves, what are you tending towards, and what might the path look like?

Lukas Kranzelbinder: Well, we have quite a few concerts till summer and I’m just really looking forward to playing live again; to let the music live and to see how it develops. We haven’t played the program much before and now there’s the chance to discover it again and again. Another big advantage of the band is that there’s always a certain euphoria when you play. When you go somewhere, everyone is so into it, and that feels really nice. You can look forward to every concert and you kind of know, okay, if we play there, it’s going to be great! I haven’t played a bad concert with the group at all, where I didn’t feel good. This is of course a very big source of energy and everything else – we will see. You can’t plan much in the current difficult global situation anyway. I don’t dare to make big visions or plans, but I’m just grateful and happy that we have the opportunity to exchange with people in the form of concerts, to make connections and to emphasize and focus on what we have in common. I just hope that the world will develop in a positive direction again.