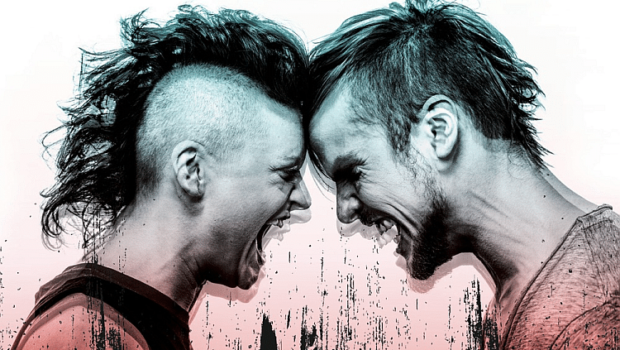 The duo White Miles were on tour through Europe with Courtney Love and Eagles of Death Metal. An experience that didn’t just provide them with band experience, but also with inspiration for their latest album.

That album is “The Duel” and the cover art is a portrait of both band members screaming at each other.

The cover sums up the direction that Medina Rekic and Hansjörg Loferer wanted to go with their music: full steam ahead. They aren’t really duelling though, the two of them actually form a very strong team. Rekic, who has been an accomplished rock guitarist for years now, gives everything she has on this album, and Loferer provides no less on the drums.

A DUEL THAT ISN’T

It’s that teamwork that is responsible for the compelling vibes that are the key to the title of the album. It’s not just about how the White Miles fight each other, but about how they work together on an exhausting project. The genre they have chosen to describe themselves also fits well to their attitude: “Dirty Pole Dance Stoner Blues Rock”. A description that provides more than a few hints as to what you can hear on the album.

Stoner Rock for example. This genre developed out of blues rock – a genre the White Miles also have in their repertoire – and was further developed out of influences from 90’s grunge. The sound features deeply tuned guitars often combined with a not so normal song structure. The White Miles interpret this style in their songs “insane to the Bone” and “Heid”. The last one features a deep guitar melody and the voice of Loferer who speaks rather than sings. “Insane to the Bone” lives from the same deep guitar and an apparently chaotic melody.

The duos willingness to experiment with vocals isn’t just apparent on “Heid”. “Don’t You Know Him” and “Coke on a Jetplane” are also unconventional. “Coke on a Jetplane” sounds more like an end-of-party jam than a hard rock song, and “Don’t You Know Him” is something completely different again. It’s a “song” in which there is no music, and it isn’t sung. According to the band that’s not because it was a lyric that couldn’t find a melody, but because it was something about a friend that simply had to be said.

Long time fans familiar with their sound will certainly enjoy the harder rock songs that provide the drive behind this album. But newcomers will probably be able to appreciate the fact that White Miles have sprinkled a few slower pieces in amongst the rest. Songs that provide a useful contrast to the harder pieces on the album. A reason “Coke on a Jetplane” can be considered  one of the best songs of the album. It is a focused song with a melody that sticks in your head and combines the voices of both members in perfect harmony.

“The Duel” is an album that that highlights the many experiences of the band. It is a multifaceted musical work, with a variety of tempos and moods, but never leaves the bounds of their chosen genre. And that is the true strength of White Miles.