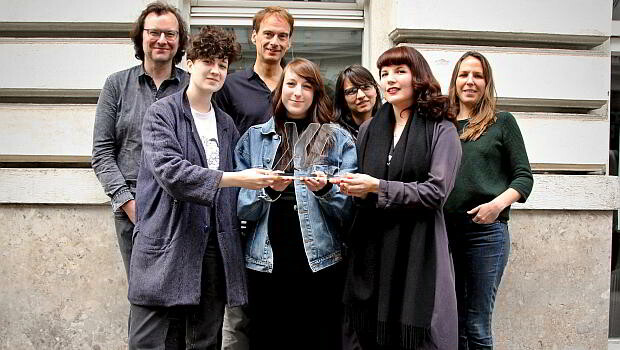 The XA – Music Export Award was presented for the second time at the Waves Vienna Music Festival & Conference 2018. The Viennese indie rock band DIVES emerged as the winner among nine nominated bands.

“The moment you see them on stage it’s hard to takes your eyes off this band,” says jury member Mariusz Herma from the international music platform beehy.pe, describing his impressions. DIVES unique sound is due to the two-part singing of Tamara Leichtfried (guitar, vocals) and Viktoria Kirner (bass, vocals), paired with distinctive guitar riffs and the driving beats of Dora de Goederen on drums. The trio exudes a certain lightness in their sound, a combination of garage punk with indie pop elements and surf rock. At concerts, DIVES, who formed as a band in the course of a Girls Rock Camp in 2016, give the impression of a sworn team.

DIVES HAS POTENTIAL THAT WANTS TO BE EXPANDED

“Having fun on stage is really important to us“, the three musicians explain in unison. The successes of the last months have shown them that their band DIVES has potential that wants to be expanded. In any case, the release of a debut album is planned for 2019 and a tour through the Balkan countries is also on their wish list. But DIVES are also looking back nostalgically to their early days, when they just started playing, spent a lot of time in the rehearsal room, and most of their songs were written.

The XA – Music Export Award is not only intended to pave the way onto international festival stages for the young band, but also to give them more freedom for the creative part of their music-making. Aside from the prize money of 3.500 €, donated by the SKE Fund of AustroMechana, the XA – Music Export Award includes the assurance of Austrian Music Export, Radio FM4 and Waves Vienna to support the respective winner through expertise and international networks in the following year, for example through exchange at partner festivals.
The nine jury members wish DIVES many live performances. On the other hand, they also want them „to continue on their path unswervingly, to sharpen their already good, recognizable sound further and thus continue to be successful,” says Amira Ben Saoud (The GAP).

“For us the award has come at exactly the right time and is a giant step in our so far very successful internationalisation”, report last year’s winners Stephanie Widmer and Alexander Köck. Together they form the band CARI CARI , which captivated music fans last year with their unusual combination of digeridoo, jew’s harp and their unique sound. “The XA is particularly distinguished by the fact that it starts exactly where musicians need it.” Not only their appearances at important showcase festivals like Eurosonic Noorderslag, The Great Escape or Primavera Sound in Barcelona testify to the lasting effect of the award. “Also in Austria the interest by fans, critics and the media has improved a lot”, the two musicians explain.