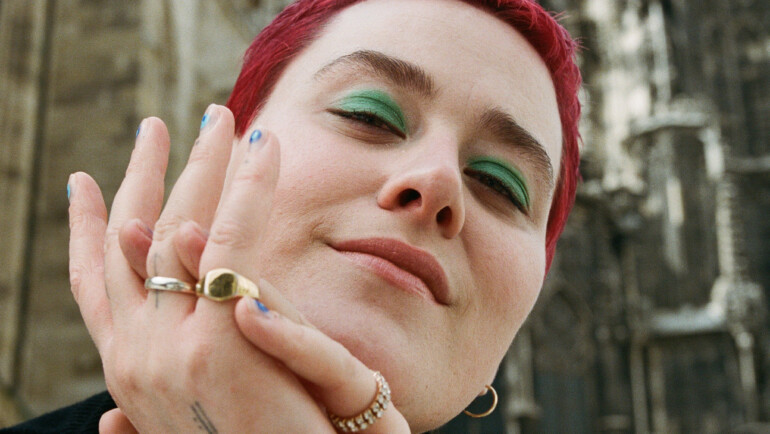 For the sixth time, the XA MUSIC EXPORT AWARD was presented as part of WAVES VIENNA 2022. The aim of the award is to support Austrian musicians at an early stage of their career. We are honoured to announce that FARCE won this year’s award!

At the end of an incredibly successful edition of Waves Vienna, festival director Thomas Heher and Franz Hergovich (Austrian Music Export) had the privilege to announce this year’s winner of the prestigious XA Music Export Award!

Producer, songwriter and artist, Veronika J. Koenig – best known by her stage name FARCE – remains unimpressed with genre restrictions and finds her niche in anything that is heavy in bass and intense in emotion. Her oeuvre spans not only her solo works, but also continuous collaborations with likeminded artists like techno pop maven Fauna and Wolfgang Moestl of Mile Me Deaf. Reminiscent of acts like Robyn, LCD Soundsystem and Charli XCX, FARCE continues to produce an intoxicating mix of rather violent, experimental ideas finding a home in theatrical and flamboyant Pop music.

Her EP ”Trauma Bounce” arrived in late June of 2020, spearheaded by the fun, sexy, sad ”Subway Surfer”. In 2021, her single “Meditation 4 2” appeared, which subsequently was released on the 2022 album, “Not to Regress”. As FARCE’s artistic development continues to grow, so does her fanbase and impact on the music market. Continuously spreading her music, presence, art and ideas throughout and outside of Austria, the XA Award greets her at just the right moment in her career – to add momentum to the already rising wave she’s riding, as well as to help louden the bang of her latest album.

The Austrian artist was one of six nominees, alongside Berglind, Bibiza, Lisa Pac, Oskar Haag and W1ZE. In the end, FARCE convinced the jury with her fantastic performance on Thursday at WUK, the main venue of the Waves festival.

The jury consists of eight international and national jurors from a pool of promoters, bookers and music journalists, who evaluate the concerts of the nominees. The act with the highest score wins the XA Award along with prize money of 3,500 Euros and a promise of support from Austrian Music Export, FM4, and Waves Festival for the following year, including integration at partner festivals and showcases. In addition the act gets a travel support of 5,000 Euros from the Federal Ministry of Arts, Culture, Civil Service and Sports and Austrian Music Export within their Focus Acts program.

We’d like to congratulate FARCE on this happy occasion and look forward to everything coming up in her bright and booming future!