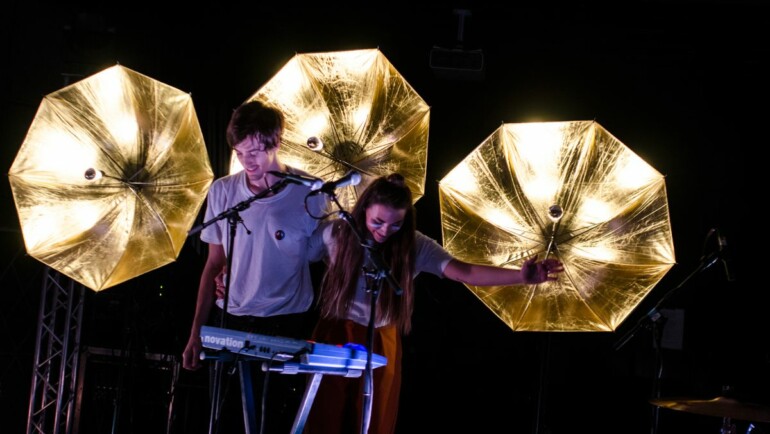 it starts exactly where musicians need it

“For us the award has come at exactly the right time and is a giant step in our so far very successful internationalisation”, report last year’s winners Stephanie Widmer and Alexander Köck. Together they form the band Cari Cari, which captivated music fans last year with their unusual combination of digeridoo, jew’s harp and their unique sound. “The XA is particularly distinguished by the fact that it starts exactly where musicians need it.” Not only their appearances at important showcase festivals like Eurosonic Noorderslag, The Great Escape or Primavera Sound in Barcelona testify to the lasting effect of the award. “Also in Austria the interest by fans, critics and the media has improved a lot”, the two musicians explain.

For the second consecutive year the music export prize “XA” will be awarded at the Waves Vienna Music Festival. The award is an initiative of Austrian Music Export, SKE Fonds, Radio FM4 and Waves Vienna. Nine nominees have the chance to win the award and will be judged during their performance at the festival. In addition to a monetary reward of 3,500 EUR, the winner is supported by the award partners Austrian Music Export, Radio FM4 and Waves Vienna – among other things by presenting the act to partner festivals and showcase events.

During the three festival days, the performances of the nominated bands will be monitored by a jury of experts. The jury consists of six international members – Akos Remetei (Sziget Festival), Jan Clausen (Factory 92), Karla König (c/o pop), Mariusz Herma (beehype), Luis Soares (Rock in Rio), Dan Koplowitz (Friendly Fire Licensing) – and three local jurors – Susi Ondrusova (Radio FM4), Amira Ben Saoud (The Gap) and Andrina Dolinsek (Acoustic Lakeside Festival). After all the votes have been cast, the prize will be presented to the winning band on the last day of the festival, Saturday, 29 September, at 11pm at WUK.