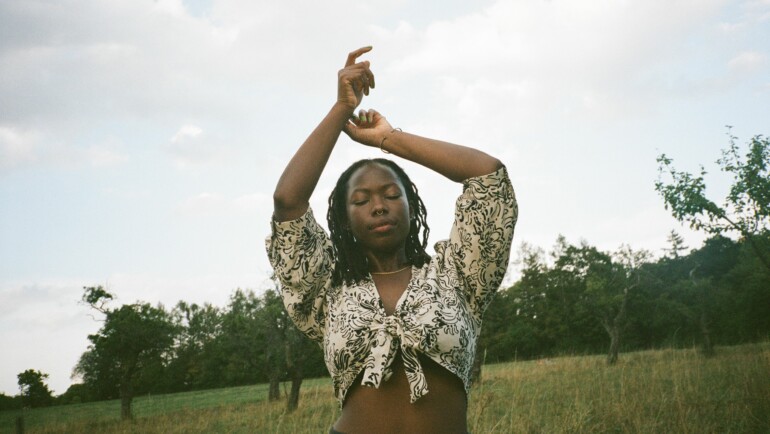 ‘Every experience tears a new consciousness.’

Yelvilaa Bodomo is YIELU: a merger of all of her life and musical experience until now and which are, in her own words, fragmented, but which all come together and find space in this powerful persona. This singer and songwriter has a unique and personal relationship to music and storytelling but also wants to share it and experience it with her audience at the same time.

As we sit in a school hall in the deep Austrian countryside for a dress rehearsal a few hours before the performance, YIELU runs through a line from her self-written song ‘Seeker’. She closes her eyes and breaks the end of a powerful first verse and into a loaded pre chorus with “bury me deep”. In that moment it is as though no one else is in the room and suddenly we are fast forwarded to the final performance where a now full room holds its breath at that very same line.

When YIELU is on stage it feels the same as, but somehow also different to, Yelvilaa Bodomo the creative, the singer, the songwriter. Same because her message and power are her constants, different because of the specific impact YIELU has once performing. For every moment she sings we are no longer in the town’s school hall which has been cabled and staged overnight to form a concert space. The lingering smell of gym kit is immediately irrelevant. The backstage is a school kid’s changing room politely masked over by a makeshift welcome basket of wine and vegetarian finger food. All of which falls apart once YIELU opens up to sing. Her presence fills the room and we too are summoned to tune into all that matters in that moment: her. So how did she come to be here, in this setting, singing these songs, reaching these people?

For Yelvilaa the stage is solely an elevator and amplifier in the moments she is sharing song as YIELU but her strengths lay equally when she is off it. Her work is an ongoing practice that is embedded within the medium of music whilst also being her way of life. She is effectively a storyteller, a “griot”, if you will, performing for and from a community with the aim to share stories necessary for the very existence and survival of it. That’s the depth of expression we are talking about. Hers is a story you have to hear.

Offstage, Yelvilaa’s way of speaking leaves you fulfilled and at the same time further intrigued since so her silence is as potent as her speech. A self-proclaimed introvert, she is also an evidently self-confident and “unfuckwithable” individual that knows her power and knows her purpose.

do we stand to be misunderstood

our words twisted and bruised?

well silence, smiling did no good

there’s nothing left to lose

Yelvilaa herself refers to her role as a “channeler”. When asked what the latter means, she says “it’s the place that when I am performing I step into and it is channelling a place beyond [my] immediate consciousness”. She says it is like pulling from a bigger human experience and achronological knowledge. She describes it as a ‘past-to-present’ collective memory which even she is still defining but constantly evoking. And this recognisably polyphonic performance leaves you feeling you have felt something bigger than a song. Channelling is a way that she enables others to be part of a performance and not subject to it or even entertained by it. It is not to be consumed, it is to be experienced. That is what makes her so important as an artist: she is in control of her own story and her own songs. And, in a room full of people, in a tiny village hall, this power is key. By the last note of her sound, they are captivated and she has torn a new collective consciousness through an experience she has so gratuitously shared.

Community and collective has always been key to Yelvilaa’s artistic practice: she comes from a family of extremely talented creatives and thinkers, from her father a professor at the university of Vienna for African Studies to her eldest sister a successful filmmaker based between West Africa and the USA, to her youngest sister also a writer and poet. Not only is heritage central to their work, they are also united and influenced by their diasporic movements across several continents as a family. Yelvilaa was born in Norway, where her parents were studying at the time, they then all moved to Ghana where she grew up. She was 7 when the family moved to Hong Kong where she spent most of her upbringing. After school she then went back to Norway. And then Austria. Music followed her throughout: she took vocal lessons in Hong Kong and also in Vienna but moving she then enrolled in some classes at MDW (Vienna’s University of Music and Performing Arts) spanning composition and harmony theory to music history (amongst others) to gain a little experience of a more formal music education. Outside of that and as an adult, Vienna has been the place which has centred and grounded the singer. Here, music was the main focus and thereby a meeting place for the fragments she often talks of when it comes to her identity. Fragmentation could evoke the ideas of ‘broken’ but on the contrary, Yelvilaa describes her experiences as positively formative to her musical style and references. Music is, in her words, her way of processing and expressing all of these facets to her identity.

outside of the maze

beyond all the dark days

Storytelling and language then are a central part of her work of bringing ‘sense’ (loosely) to such experiences. She draws from her linguistic flexibility having moved and communicated in so many contexts and continents. YIELU is itself a word from her familial lineage and language “Dagaare”, a language of the Dagaaba people in Ghana and Burkina Faso. YIELU is dagaare and close to the word for ‘song’ but also just means a thing or matter or something that is ‘here’ – something existing.

Dagaare is in fact a dialect ‘continuum’ literally a language which travels and varies, and so it beautifully reflects and compliments YIELU’s own desire to have her musical persona be a longer ongoing work. It all comes full circle and is all orchestrated with such brilliant intention by the artist herself. YIELU’s songs have therefore been performed in different contexts  over the last few years but her non linear approach and development of her music in continuum means she often relives and revisits moments and songs to bring them again into existence. She is currently working on recording these songs for the first time. One of Yelvilaa’s songs ‘Kɔngmaarong (Cold Water)’ is inspired by a dagaare saying that translates roughly to “even boiling water simmers down to cold water’  – meaning that, eventually,  everything settles and calms. As she explains this she reflects upon that meaning in her own experiences: that chaos, movement, change, all come back to still and rest. And that is what music does for Yelvilaa, “through music I am able to process and then by sharing my music, I channel it”, she remarks.

Writing in Dagaare has been a recent venture for the songwriter, even though at home grew up hearing the language at home. As a child and within a familial context is one way in which she learned vocabulary and cues but, as an adult, Yelvilaa explains she uses dagaare in this song to explore the language on her own terms. In her words, it is a way of expressing without having to explain how it lands or being dependent on how people hear and interpret it, the point is solely that it exists (dagaare) and is here and that is part of her process. That is her song.

It becomes evident, in this temporary concert hall we are in, that her play and intention with language has transported us to a more vivid feeling and space. That this individual who has had so many experiences of this small but vast world has brought all of that to this tiny town in Austria on this night. She has connected us as she has channelled emotions and feelings we didn’t know we could have.

we’ve seen it all before it could exist

She has made us grieve a life we never lived. Mourned a loss we never had. She tells me every experience she’s had has torn a new consciousness: a new conception of herself, how she moves through the world and the lens through which she interacts That she had to forge herself again and again in each context she has been in until now and that that has made YIELU exactly who she is. Everything has come to settle in her.