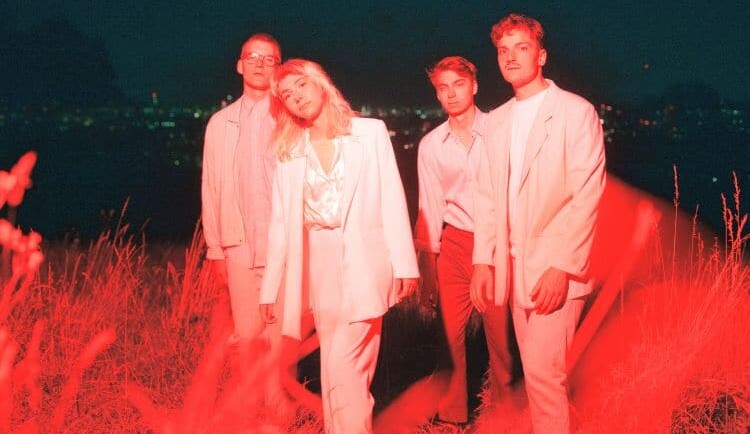 Patriarchy and pop music? Gender-Gap and electric guitars? Among other things, the Viennese band CULK moves in the area between these coordinates on their second album “Zerstreuen über Euch”, released by Siluh and to be presented at the WUK on October 30, 2020. Jürgen Plank met SOPHIE LÖW and CHRISTOPH KUHN for an interview: A conversation about internal rhymes, the fight against injustice, about cancelled or postponed concerts and making music after the Corona lockdown.

The press release for the new album says that it’s a declaration of war against deeply rooted patriarchal structures. More precisely, against what?

Sophie Löw: The lyrics of the individual songs are connected to each other in terms of content. Basically, the album is not an answer to social problems or grievances in power relationships regarding gender issues. It’s pointing out and looking at problems and this manifests itself in various themes on the album.

Sophie Löw: In the song “Nacht” I’m talking about my experience that at the age of 25 I still don’t feel free to go home alone at night, in a completely relaxed way. The street or the night is not a place where equality prevails. The song “Jahre später” is about a woman who does not know or never has learned which rights she’s entitled to and what is normal and what not. She was treated unfairly, boundaries were crossed, and she can only understand this many years later. One aspect is fighting against injustice and the fact that one first needs to understand the structures in order to be able start the fight.

“ALTOGETHER, WORKING ON THE MUSIC FOR THE SONGS WAS NOT VERY DIFFICULT”

What were the working procedures for the new album?

Christoph Kuhn: It was very different from song to song. There were working procedures for some songs that were pretty loose, and there were working procedures for other songs that were a bit more difficult when it came to finding the final shape. Altogether, working on the music for the songs was not very difficult. This was also due to the fact that we are good friends and have developed a good way of dealing with each other.

What has changed compared to the first album?

Christoph Kuhn: In contrast to the first album, we took care while writing the songs to give more space to the lyrics and to push the instrumentation more into the background. To be more precise, the lyrics are more deeply embedded in the music to give Sophie’s voice more space.

Sophie Löw: You can tell that the listeners have more access to the content, and that‘s definitely real nice.

Even before Bob Dylan received the Nobel Prize for Literature, song lyrics were central to protest songs. Is there a poetic way to make it easier that content grabs the listener’s attention?

Sophie Löw: I think it’s good if you write lyrics that have a good reading flow and content value even apart from the music. The lyrical packaging should hide the pointing finger somewhat, that was a concern of mine while writing. By using a lyrical packaging the lyrics are an offer to the listener to deal with a topic, yet one is not forced to do so. I believe that you can listen to songs without having to understand the lyrics 100 percent. You present content in a lyrical way and that makes it all the more accessible to the people, I think.

In the song “Dichterin” you say: “I’m not a poet, but I write poems.” What did you want to convey with that?

Sophie Löw: The song is about the fact that people are forgotten about if they are not represented in language. Or, that they aren’t given that much importance. So I won’t be a poet, but a poetess, and I won’t be a lyricist, but a female lyricist. Language is also a demonstration of power when people cannot be part of a language.

The song did not refer to songwriting itself?

Sophie Löw: I was referring to words and the power behind words.

You were already on tour in Germany, what was that like? Did you notice any differences between touring in Austria or Germany?

Christoph Kuhn: Generally the distances are shorter in Austria, but touring in Germany is more exciting because you enter a new terrain, you get to know new cities and play in clubs you haven’t been to most of the time. In Germany, people often approach you after the concert.

Sophie Löw: I agree with Christoph, for me the difference is that we usually don’t know the people in the audience personally. That’s a nice experience for me, because if you know the people personally, this inhibits me a little in my performance and that’s the biggest difference to playing in Austria.

What is the background of the song “Nacht”? Are there personal experiences behind it or  is there any other purpose to this song?

Sophie Löw: In general, the desire for freedom is very strong when you’re out on the evening on your own as a woman. I have also talked about this with girlfriends of mine, and it’s an issue that accompanies you your whole life: you are brought up to be careful at night and you develop protective mechanisms. I just don’t want to be afraid anymore when I’m walking home alone at night. As a child or young girl I thought to myself: when I’ll be 25, I will no longer be afraid – or have a bad feeling. But unfortunately that’s not true. In the lyrics I’m talking about protective mechanisms, about the fact that you deliberately change sides in the street. Or that you have a second pair of shoes with you, without heels, so that you don’t clatter too loudly when you’re walking.

“IT’S ALSO ABOUT WORDS THAT ARE INTERESTING AND FIT THE TOPIC, AND THE LYRICS MOST OF THE TIME THEN COME ABOUT LIKE IN A PUZZLE”

The lyrics are all written by you. I have noticed that you often are using internal rhymes. Are you working on the lyrics until a rhyme emerges within a line or does that simply happen?

Sophie Löw: First of all, I have a topic in my head that I want to write about. Then I collect phrases which I find important as to content and beautiful as to language. It’s also about words that are interesting and fit the topic. Most of the time, the lyrics come about then like in a puzzle.

You will be presenting your new album at WUK. Why did you choose this venue for the presentation?

Sophie Löw: The WUK is a really great location in Vienna and in Corona times there’s a great opportunity to do a sit-in concert there, for which there’s enough space. And there’s also something festive about it, I think. There would have also been the possibility to play an open air concert, but we need an indoor space for our music. That’s how it always works out best and that’s how we can build up an intimacy with the audience in the best of ways.

Christoph Kuhn: Another nice thing about the WUK is that afterwards you can talk in the courtyard to the people who attended the concert.

The keyword Corona has already been mentioned: How have you been doing over the last months? Have many concerts been cancelled?

Sophie Löw: To some extent it was hard to accept that. Unfortunately, many people in the cultural sector are concerned in the same way today. We recorded the album with Wolfgang Möstl shortly after the lockdown and in this sense it was an intense and beautiful time.

The period of the lockdown had a gloomy atmosphere; did this period fit you as a band and the recordings for the new album?

Sophie Löw: Maybe. I always bring a dark vibe into my lyrics and the instrumentation goes in that direction too. Other people often don’t realize that we as a band always have a lot of fun. Our strength is that all the four of us can keep our energy level way up.