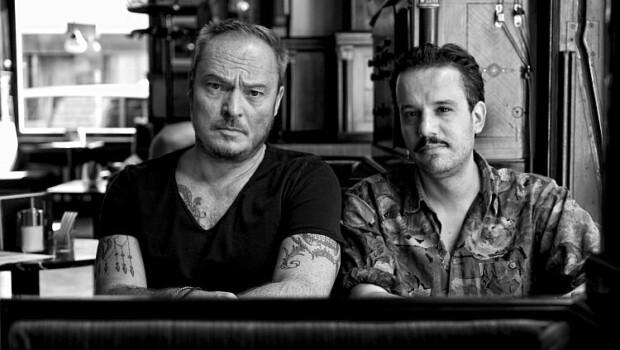 HANNES EDER is at times the best thing that could happen to local music. He has  managed “Universal Music Austria” for thirteen years and today uses his know-how and network to take young people’s music that moves him to the public with his label “Phat Penguin”. He’s doing this with BENJAMIN BRÜST, his long-time digital director at “Universal”. This would have worked out brilliantly if it wasn’t for Covid-19. HANNES EDER in an interview with Stefan Niederwieser.

What does it take to be part of “Phat Penguin”?

Hannes Eder: To stand out artistically. It has to be original, genuine and particularly good. I’m not into dilettantism anymore. Everybody’s good at the instrument, insanely creative, there’s no bad material. At the beginning we only wanted to manage completely fresh talents. But they need a label. And we can do that with our eyes closed. So we’re doing it. All the artists are doing great. If it hadn’t been for Corona, we would have had a harvest this year.

Hunney Pimp, Anger, Felix Kramer and Buntspecht have a special way of dealing with language.

Hannes Eder: I want to be touched emotionally myself. When I see these artists live, tears still shoot into my eyes. Buntspecht actually make poetry with music; that’s quite different from most successful German-language music. To listen to so many lyrics, you need more than just four brain cells. As a consumer of German rap you are certainly disqualified [Imitates a simple rap]. Unfortunately we are observing that our young people are increasingly speaking like that. To counter this radically is a great motivation, a kind of educational mission.

Is “Unter den Masken” by Buntspecht your biggest hit so far?

Hannes Eder: Yes, without a doubt. We are heading for two million streams. Last autumn Buntspecht played a sold out Germany tour, this year they would have had bigger venues and headliner slots at festivals. The band has an incredible charm and power, and they also capture people who have already seen a lot. iTunes and Spotify are supporting us.

The dialect wave is still going on. Wouldn’t it be obvious for a label to use it as a safeguard?

Hannes Eder: When I founded the label I said to Benny: “If we want to earn money, we both know what we have to do. We make hits in the “Schlager” genre and export them to Germany and Holland.” But we don’t want that. At “Phat Penguin” the big headline reads: “Asshole-Free-Zone”. We don’t work with anyone who acts like an ass, towards us or others. For us, that means having quality in life.

What are your long-term plans? Artists can be a little unpredictable…

Hannes Eder: You have to be very careful and know where to hold back and where you can do something. With people one has personal developments as well as artistic, group-dynamic processes. Felix Kramer was on his own in the beginning, now he’s playing with a band, Buntspecht are writing songs together, all six of them. Nobody here is opposed to accepting any advice. And if a different decision is nevertheless taken, we accept that. We are not a major label.

Are you guys full up for now?

Hannes Eder: We wanted to take care of four artists until we could pay a team of employees. Then Kruder & Dorfmeister joined us. OK, that works out because that’s not a long walk through the desert. I think we’ll have someone else soon. But then that’s it. With no money coming in since February, it’s hard to make plans. It’s a horrible year.

What would have been the biggest challenges without Covid-19?

Hannes Eder: Just luxury problems. Our artists would be on tour, we would be able to handle the next productions. We built up the company for two years now and didn’t take anything out of it. That will remain so for one more year. Me too, I’ve got no dough. But I don’t want to compare that to people who can’t pay the rent. Gradually, one has to ask oneself if the high-school level graduates in the government are really so inexperienced or if this is political calculation. The free art scene is creating many jobs, is paying taxes and has been left standing completely in the rain by the government for a long time. I immediately tried behind the scenes to make the institutions like LSG-performers, LSG-producers, OESTIG, AKM and IFPI realize that no money is flowing. With some telephone calls it was clear that there will be direct help from emergency funds. Big artists are currently getting through. But from sound and light technicians to tour bus drivers they all don’t have a job at the moment. Nor can they simply do another one. Individuals have received 500 euros from the artists’ social security fund, they may have their first or second child. For many of them, grandmother has to help them out.

Did you apply for aids?

Hannes Eder: Our artists, tour managers and all together have received a total of maybe 10.000 Euros. We are all supporting the Corona measures. But you can’t say: “I’m shutting down all activity, but you won’t get any money, you have to see for yourself how you get back on your feet”.

Did streaming go down in lockdown?

Hannes Eder: That varies a lot from country to country. Corona has brought about the fact that hotels, bars, shopping centers and hairdressers are no longer streaming, that’s why the numbers have decreased globally, in other countries more dramatically, in the USA more than ten percent. We don’t notice this with our acts. Others are reporting half as many streams. Now that’s interesting.

“WE ADVISE OUR ARTISTS NOT TO SIGN A PUBLISHING CONTRACT”

Does “Phat Penguin” also have a publishing department?

Hannes Eder: We advise our artists not to sign a publishing contract. We don’t offer one either, I think that’s a bit unfair, even if everyone is mocking us.

They say that this is the pension for labels.

Hannes Eder: Yes, that’s what they say. But I’m already so old, and I’ll have to work all the way until I’ll die anyway. Of course publishing rights are interesting, but we see ourselves as guardians of money which has not yet been earned. When we’ll be having three albums together, we will negotiate a really nice international publishing deal. Until then it is irrelevant.

What about sync rights and booking?

Hannes Eder: We are doing sync. With booking, the question was whether we should hire someone who has the know-how and especially the phone book, or whether we should get someone as a partner. We decided to take the second option. Even if Reini Seyfriedsberger didn’t want to do it right away [laughs], three artists are with the “Spoon Agency”. Hunney Pimp needs a different network of contacts in hip-hop. And Kruder & Dorfmeister are worldwide with the British agency “Paradigm”. We also like to find agreements in booking, where both sides can shake hands afterwards. At “Universal” I had situations where I knew I could destroy someone. But my happiness in life is not increasing if I can squeeze 10 cents more per unit from someone. I grew up in the eighties, my spirit comes from that time, from indie, there were no structures, no control. When people threw burning phone books at concerts, there was no ambulance or fire brigade far and wide. Falco was a world star, but that had no lasting effect on the Austrian music industry. My point is that the scene needs to be strong. It will be that only if it finds good structures in as many facets as possible with competent people. Today, Austria as a cultural nation has a lot to offer in the field of pop music which is an enormous value-added factor; we are talking about many billions, more than agriculture with about the same level of funding that, moreover, only goes to operas and festivals.

Speaking of cultural heritage, why has the repertoire of Kruder & Dorfmeister not been dealt with for so long?

Hannes Eder: There was an interruption during which they were not performing together. In the nineties, many rights were not clarified, including those of the “K & D Sessions”. We are working on that, and that takes time. And soon there will be something new.

Hannes Eder: That’s easy to answer. You need everything. With every channel you aren’t making use of, you are losing something: target group, reach, whatever. Anger are living totally in the Instagram world, Felix Kramer needs a little support. You can’t skip a video, that’s an ugly cost factor in any calculation, and you can’t skip Facebook either, because our listeners are there too. It’s a question of evaluation: Which channel can most likely be neglected?

The death of the album has been announced a bit hastily some years ago, hasn’t it?

Hannes Eder: In hip-hop albums are produced because they generate streams. As soon as a song lasts 1:50, it is accounted for at Spotify. This profit maximization follows the common market economy concept of constant growth. It is ultra-capitalistic. Many consumers are happy with songs and playlists, there is nothing to say against that. People who love music – and they are those our offers are aimed at – have a wider attention span than a goldfish. They can digest a pop song of over three minutes, mentally and emotionally. Our artists tend to have something to say, for conception, suspense and flow they are using a lot of brains. I need an album for that. This is a journey like in a movie, and I want to know how it ends.

Which conferences and festivals make sense for you?

Hannes Eder: We don’t go anywhere, unless our acts are playing there. I have flown more than enough in my life. We judge costs and output on a case by case basis. A lot of stuff is not necessary. People from music export or mica are often there anyway, with whom we make arrangements. Maybe one good thing about the Covid-19 disaster is that there will be more video conferencing. I don’t like them either, but they are a substitute for flying.

So, what are you taking your time for?

Hannes Eder: Time for nothing. I think it makes sense to have a big portion (of time) where you don’t have to do anything, but where things can happen. I listen to music, read, and visit exhibitions. The most important thing then is not to think about money. That might sound arrogant, I’m not rich, I just don’t want to reproach myself just before departing that I spent my time with pointless shit.