On the 16th of September 2010, the Austrian music industry celebrated their heroes  at the annual Amadeus Austrian Music Awards in the Wiener Stadthalle and honored the winners with the coveted trophy. The awards were presented in thirteen categories. Big winners of the evening were the Styrian pop singer Anna F. and the Upper Austrian hip hopper Skero. Toni Stricker was awarded for his lifetime work as a violinist and composer.

It was a lavish celebration. Almost everybody who is anybody in the Austrian music industry  came to pay their respects to these year’s winners of the Amadeus Austrian Music Awards. There were some surprises, which is also due to last year’s newly introduced public voting. Not all supposed favorites  in every category were able to carry away the prize. This year for instance, the repeatedly nominated band Bunny Lake left the evening empty-handed. 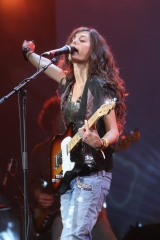 Also in the jazz sector, the nominated Sabina Hank and Ernst Molden were not able to mobilize enough fans. Most fans voted for Anna F. and hip-hopper Skero. Both were honored with two awards. The young Styrian songwriter received the much sought-after awards in the categories Best Album and Best Rock/Pop Act. Skero won in the categories Hip Hop and Best Song of the Year (for the song “Kabinenparty”)

A touching moment was the bestowal of the Lifetime Achievement Award to the violinist and composer Toni Stricker. In his long career, the now 80-year-old played with various jazz legends, including  Joe Zawinul and Attila Zoller. The jury of the Amadeus Awards praised Toni Stricker as the “epitome of swing violinists”. 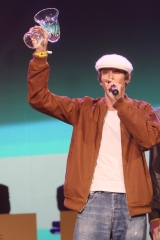 Song of the Year and Hip-Hop / RnB
Skero