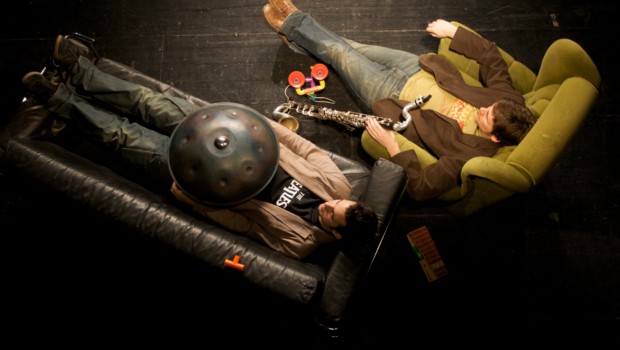 Last year the bass clarinetist Christoph Pepe Auer and hang player Manu Delago impressively demonstrated their understanding of reinventing music on their second album “Colouring Book”. As the duo “Living Room”, the two Tyroleans virtually followed their self-developed traditions and have once again released a new CD: “Living Room in London” (Session Work Records). With the addition of a string trio, they are now working on illuminating the concept of chamber music in a whole new light. The very tonal orientation of the new founded quintet is a piece of music which leaves the listener in awe. The unusual combination of bass clarinet, hang, and a string ensemble creates a highly individual and varied sound, which simpy abolishes all open questions on stylistic measures. 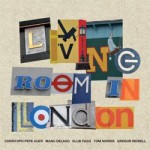 Together with their London-based colleagues Ellie Fagg (violin), Tom Norris (violin, vocals, guitar) and Gregor Riddell (cello) from the internationally renowned London Symphony Orchestra, the award-winning bass clarinetist Christoph Pepe Auer and the now internationally sought after hang virtuoso and percussionist Manu Delago have created beautiful music pieces that simply do not fit into any ordinary category. Thus, the five musicians have enriched their own compositions with various quotations from the entire music history and have created music which is far away from any traditional norm. Operating at the interfaces between different forms of play, the extraordinary ensemble celebrates its music to perfection.

When trying to describe the music in words, it is probably not far from wrong to say that this ensemble practices a new concept of chamber music with a very modern style and generally innovative interpretation. With the complex compositions, the quintet tries to build bridges between different genres, from jazz through to classical music, from pop to elements of world music, improvisation towards singer/songwriting, from Mozart to Miles Davis and Michael Jackson. The music is a mixture that finds its expresseion in a unique, fascinating and hardly comparable sound. Furthermore, the five musicians are rather cautious in their performative approach, which gives an additional intriguing depth to their music.

“Living Room in London” is wonderful proof that there are still so many new and unusual paths to discover in terms of music. Living Room is an outstanding and exciting project that is absolutely worth listening to.