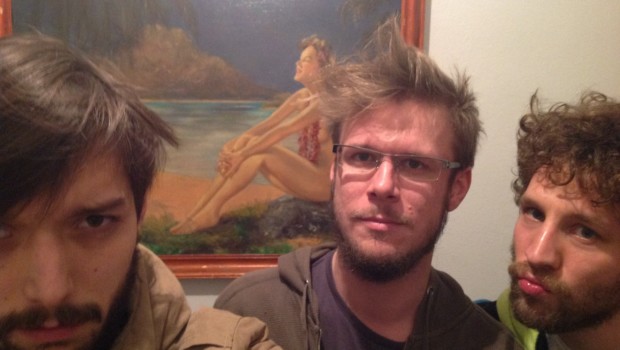 Artist Portrait
Some bands can come across as quite mysterious. With hardly any search results, you are happy about every small piece that slowly fills in the puzzle. And then you discover that it is not really a “band” in the classical sense, but rather an artist collective that is operated by busy members involved in numerous side projects. And once you listen to the music of the collective, the mystery suddenly becomes kind of relative. T-Shit’s music wanders a fine line between improvisation and hyper-intelligent-dance-music. One may not always understand how the tangled sounds fit together, but there is always a common theme.

This music collective constists of Bernd Klug, Sixtus Preiss and Bernd Hammer. The term collective because the three members are involved in other alongside projects, or better said, T-Shit is the side project. Klug’s world has always evolved around the double bass. The New York-based musician not only has a Bachelor in instrumental studies of double bass, but also has a list of numerous collaborations. His sound installations have been presented on more than one continent.

Solo artist Preiss has been making music for quite a while now. Brought up by a Russian music teacher, Preiss mastered classical piano training with a special sense of discipline. At the same time he also found interest in electronic music climes around improvisation and free jazz. Especially the latter has noticeable influences on his solo career.

In turn, Bernhard Hammer is part of the acoustic techno formation Elektro Guzzi. Inspired by Detroit-techno, Elektro Guzzi still holds dear to unusual electronic music instruments like guitar and drums. This type of instrumentation also applys to T-Shit. The trio creates its wall of sound with conventional instruments. Even though the band does not perform on stage as much as the fans would probably like, their concerts are always an enjoyable challenge for the ears and legs.