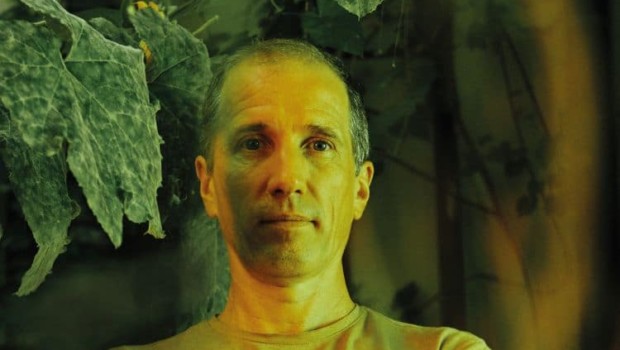 The restless musician and author HANS PLATZGUMER has enriched his decade-long discography with another highly successful work: “Holst Gate” (Noise Appeal Records) by his band CONVERTIBLE. Essentially pop music, guitarist and singer PLATZGUMER, bassist CHRIS LAINE and collaborator HANNAH MCKENNA balance an atmosphere between sublimity, light-footedness and melancholy. In a conversation with Sebastian J. Götzendorfer, HANS PLATZGUMER summed up his artistic work, spoke about interdisciplinarity and alter egos, and why “Holst Gate” has a special place in his catalogue.

What significance does “Holst Gate” have for you after more than 30 years of musical releases?

Hans Platzgumer: It has a lot of value for me. For me it feels like the album I always wanted to make. With the many albums I’ve released in the last decades, there are better and worse ones, highlights and lows … Now I have reached a kind of crowning achievement.

So “Holst Gate” as Magnum Opus of your previous work?

Hans Platzgumer: No, that sounds too bombastic, but I think things were right on point this time. When it comes to music, I´m all about taking risks and trying new things. You leave the shallow waters and run the risk of going too far. In this case, everything has gone well. I created this artistic figure of a Norwegian named Colin Holst who made the album. That made my work easier.

This alter ego, was it a creative outlet? Did it allow you to approach music in a different way which otherwise wouldn’t have been possible?

Hans Platzgumer: Totally. It gave me a lot of freedom. Colin Holst released channels that I might not have dared otherwise. The wind arrangements or the electric guitar walls, for example, which I never thought I´d use ever again. I also played around with the vocal style a lot. That was all this strange Colin Holst who slipped into me and made all this possible.

“I’m not fully schizophrenic. Not yet.”

You’re obviously not schizophrenic, so how did this other personality come about?

Hans Platzgumer: It actually came about because I didn’t want to make anymore albums or music. But then music kept developing inside of me because I still play music every day. Every evening, before I go to bed, I play the piano for an hour to calm down. I actually didn’t want to publish all that. But all of a sudden there were some really good chords. So we got into a situation where we as a band – also in agreement with my bass player Chris Laine – had new songs, but didn’t actually want to make new songs. That’s why we wanted to release it incognito as someone completely different. Similar to Queen of Japan, where we hid behind pseudonyms for years. There we had Japanese names and Japanese friends of ours then gave the interviews instead of us. That was a lot of fun including one or two real world hits. But keeping up the masquerade was too much of an effort at some point. That’s also what’s happening now: The fun was very inspiring, but I can still evaluate what happened. I’m not fully schizophrenic. Not yet.

When one knows that you are also a writer, such a character may not be as surprising. How do you feel about interdisciplinarity in your complete works? Would there have been this Colin Holst if you hadn’t also become a writer in the meantime?

Hans Platzgumer: No, I don’t think so. If I had always remained only a musician, the album would never have been made that way. Because of course it is a literary figure. I can imagine this Colin Holst very vividly. There even was the thought of writing his story in the inner sleeve of the album. I also wrote a long interview with Colin Holst. So I carried my literary experience with me into the world of music and made music as one of my own characters.

In your last two novels, one keynote was existentialism. Is this a theme, for example, that you also take up in music? Are there narratives, themes, etc. that you work on in both art forms?

Hans Platzgumer: Well, writing lyrics for songs is completely different from writing a novel. There I also use two completely different languages. When it comes to music, I always only think in English, because that’s how I started. And with Convertible I write all the lyrics together with Hannah McKenna, who lives in Boston and is American. All the lyrics are always discussed with her in some way or another, so it’s something completely different than writing a novel on my own. On the other hand, I could never write a novel in a language other than my mother tongue. These are totally different worlds.
However, it is quite similar in terms of content and overall mood, i.e. the atmosphere. If you read one of my last novels and listen to the new album, it fits together very well. It could even be the soundtrack to it.

Speaking of atmosphere: “Holst Gate” covers a wide range of sounds – from sublimity to melancholy to coolness. But in the end it’s a pop album. Previously you have released everything from guitar rock to electro to punk. Is there any genre which you would consider closest to your heart?

Hans Platzgumer: No, you can’t say it like that. If you went through my playlists you would find everything from Bossa nova to IDM to heavy metal and classical music. I don’t have a genre that I would prefer over another.

So your releases are rather snapshots of your current musical thoughts?

Hans Platzgumer: “Snapshots” are perhaps a bit too short, because they are rather years of process – even across different albums. The current album is no coincidence, but a further development and mixture of elements that were there before. Maybe you can compare the whole thing with the sea. Each wave brings different influences, but all somehow swim into each other. There were periods lasting a few years where I was going more into a classical directions, like chamber music, for example. Then more electronic again. This time it’s all piano based pop/rock music. But the next wave might as well bring in more electronics. It’s a flowing process.

“I’ve been increasingly withdrawing from the spotlight.”

There won’t be any live concerts for “Holst Gate”, will there?

For the novels, however, there are still readings. So do you still like being on stage?

Hans Platzgumer: Yes, I like to sit on stage for readings. But I’m no longer interested in playing concerts. I’ve given about two thousands of them all over the world. In 2019 I will be fifty. I’m no longer interested in rock concerts. It doesn’t feel right. About seven or eight years ago I played a concert in Prague with my then much younger fellow musicians from Convertible. And I somehow realized that it was more their stage rather than mine – even though I was the singer and guitarist. I was visibly withdrawing from the spotlight. That then developed over the years. At some point I really didn’t feel like playing any new concerts anymore.

A question about the other pole of the career: At the beginning with H. P. Zinker your relationship regarding shows was probably still different.

Hans Platzgumer: Yes, of course. Back then we wanted to play every day! We played twenty-five times at CBGB’s in New York alone.

The first EP by H. P. Zinker also created the now world-famous label “Matador Records”. In retrospect how does it feel to have left such a mark in the world?

Hans Platzgumer: I am a bad nostalgic. Some things you do are more important, others less praiseworthy. We have left two big footprints in the independent and alternative scene: “Matador Records” and also “Thrill Jockey” were founded solely for H. P. Zinker. So sometimes we were right there when a little bit of history was written – but I can’t buy anything because of it either [laughs].

The first albums with Convertible were released on major labels like “Universal Records”. “Holst Gate” has, as already mentioned, quite a pop appeal, but is published on the indie label “Noise Appeal Records”. From the first releases on “Matador Records” to the probably last album on “Noise Appeal Records”, is that a kind of circular conclusion for you?

Hans Platzgumer: That makes perfect sense. But perhaps that’s one of those stories that life writes by itself. When you go through a decade-long career as a musician, a lot happens – extremely stupid as well extremely good things. You have to take it as it comes. And then you have to use that moment accordingly. Now with the album and the label it feels just right. What I have noticed over time is that I much rather prefer to work in small structures and with people who are passionate and ideological. I’d rather do something with small labels with heart and soul than with major labels, where things are business as usual.

As a final question about the circular conclusion and because “Holst Gate” is apparently the album you always wanted to write: What are your expectations after this release? Well, except for self-realization.

Hans Platzgumer: I’ve stopped making myself crazy with expectations a long time ago. You can never predict what’s going happen. Nowadays it’s even more difficult to make money with music than it was back then, but one thing hasn’t changed. Doing anything only makes sense if you yourself are artistically convinced of it. The rest is extra – great when a song becomes a hit, but that’s not the point. But when I get positive feedback, I enjoy it. Sometimes the things that subjectively deserve it don’t get any recognition and others that deserve it less go through the roof. Queen of Japan, for example, was actually a joke project – it was created in one afternoon – and led to world hits. In comparison, other records I’ve been working on for years haven’t been noticed by anyone. In the end, your lifework remains. Maybe somebody wants to look into it. Have fun with it!