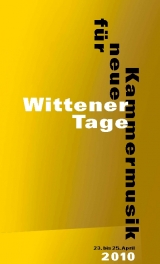 A weekend full of debut performances and world premieres: For one weekend in the year, one of the most important festivals for comtemporary music in the German city Witten gathers musicians and music lovers from around the world to a three-day concert marathon, with music that has never been performed or heard before.
From the 23rd to the 25th April 2010, the festival in Witten will take place for the 42nd time and  offers a vast variety of world premieres.

Since 1969, the Festival of Contemporary Chamber Music in Witten has been initiated, organized and hosted by the City and the West German broadcasting station WDR. The festival  constantly  sets new standards in contemporary music, is a  cultural encounter for the avant-garde, as well as a music fair for event organisers and publishers, for music connoisseurs and lovers. In the past four decades, many important works were heard in Witten for the first time, works that are an integral part of modern music history. In total, more than 600 works have premiered in Witten (since 1969) and  have been re-enacted multiple times around the world.

The focus of this year’s Festival of Contemporary Chamber Music in Witten is on leading representatives of the – second and third – “Wiener Schule” (Viennese School).
As a part of the festival, the ensemble Klangforum Wien will celebrate its 25th anniversary, and will include  a new piece by their founder, Beat Furrer. Besides the novelty of the group’s founder, the Klangforum Wien will also present new works by Enno Poppe, Salvatore Sciarrino, Matthias Pintscher and Bernhard Lang.

Another emphasis of the program is devoted to the Austrian composer Friedrich Cerha with two world premieres. Hardly any other composer has inspired contemporary music as much as Cerha. In an additional lecture recital, Cerha himself will share detailed information on his music.
During the Witten Festival, a new work by Georg Friedrich Haas will also be given its debut, yet another prestigious and outstanding Austrian composer in the realms of contemporary music.

Among other international musicians and artists, the Austrian performers this year are the sound artists Dieb 13, Franz Pomassl, Martin Brandlmayr, the Zebra Trio, the vocal ensemble NOVA, and of course, the Klangforum Wien. (db)