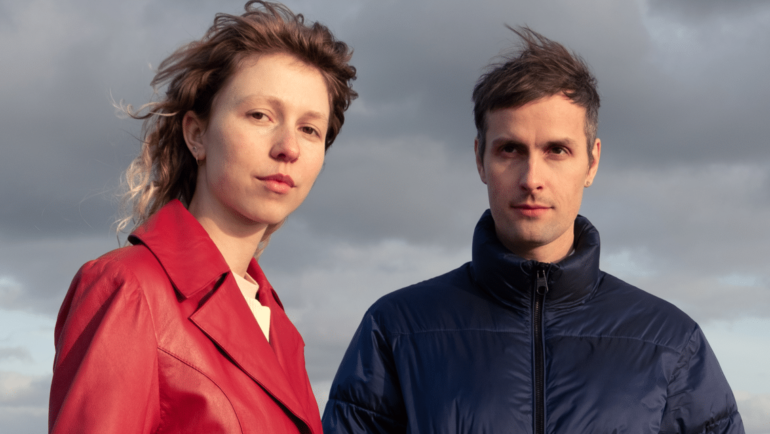 1000 kilometres and the whole internet are lying between Marten and Katja. The duo from Vienna and Kiel didn’t let this stop them and has perfected its long distance songwriting. Cloud Cloud is FM4’s Soundpark Act of the month.

The first EP of Cloud Cloud is called “What are my Options?” and will be released on June 5.

In 2019 Marten and Katja met at a concert of a mutual friend in Kiel. Marten Kaffke was already a permanent member of the shrill and colorful Viennese band KIDS N CATS and was looking for ways to live out his melancholic side musically. When he met Katja Seiffert and both of them were immediately on the same wavelength – humanly and musically – the idea of the music project Cloud Cloud was born.

In the beginning, the creation of a band from a distance was more of a joke, but when Marten sent the first suggestions, Katja immediately came up with the perfect lyrics and this kind of songwriting already worked for the first song, it was done.

Inspiration from clouds and sea

Meanwhile the first EP of the duo is finished. “What are my options?” will be released this Friday and contains four songs full of melancholy and minimalistic dreampop. The two find inspiration from clouds and sea – and you can hear that. Musically Cloud Cloud remind us of a mixture of Beach House, Clairo, The xx and Mazzy Star. Gentle guitar sounds and Katja’s even softer, deeper voice draw romantic pictures of the cloudy sky and the wet beach – the calm after the storm. Although the sound has a certain sad clumsiness, it also fascinates with dynamic lightness.

The music of Cloud Cloud is an invitation to look into the distance and to dream – especially of love and what you are willing to do for it. That’s what their debut single “Love”, the first precursor of the EP, is all about. It could have been the soundtrack for an American drama series from the early 2000s (Burning cars by the sea – OC California sends its regards!).

This darkened, dreamy sound runs through the whole EP. The song “2001” was written by Marten in his childhood room in 2001. The intro of the EP symbolizes perfectly the wanderlust he had back then. Next is “Tough Girl”, the first song they wrote together. It sounds naive and light, which is in contrast to the content of the song. The EP’s last song is called “Tongue-Shaped Dreams” and could well have been from The xx. It revolves around confusing dreams and embodies the essence of their melancholic dreampop lyrically and musically.

Musical love at a distance

Since the band was started, Marten and Katja have only seen each other twice to discuss and try out how their sound can work out on stage. The rest of the time their collaboration takes place over the internet – an email collaboration that actually works somewhat like a long-distance relationship. Marten sends Katja an idea about a song, she thinks about the lyrics and gives her feedback. The whole thing goes back and forth until a song is finished.

In the beginning the production process is strictly divided into two parts, but as soon as the framework of melody and vocals is in place, they decide together what the song should convey and add to it piece by piece. The songwriting process of Cloud Cloud is like a puzzle in which the pieces gradually create a complete sound picture in the form of a finished song.

Contrary to expectations, this has some advantages, but one in particular has benefited them in recent months: This kind of songwriting is not only Corona-resistant, the production flow and collaboration has even increased with the extra time spent at home. The planning of the first live gig too can now happen completely free of pressure. After all, in order to convey the feeling of dreamy melancholy live and for Cloud Cloud to develop their own form of stage presence, they have to take the clouds onto the stage, so to speak. And they already know how: Fog, light and even more fog.

By the way: The band name is not an arbitrary choice of a double name, because this is a trend right now in Austria (think of Cari Cari, Sleep Sleep or Hearts Hearts), but a symbol of their musical love from a distance. Because when asked where they come from, they don’t say Vienna or Kiel: their music comes from the internet – from the cloud. And because they are two: Cloud Cloud.

Opposites that attract each other

Cloud Cloud embodies a series of opposites that at first glance may not seem to fit together, but then inevitably attract each other magnetically. Vienna and Kiel. A dreampop band on the Internet. Dreamy, cloudy pop produced according to a strict step-by-step scheme. Intuitive music based on a well thought-out concept. Clouds and sea.

We are glad that Cloud Cloud didn’t let themselves be put off by these opposites, but found a way to unite them musically in a harmonious way. Because the result can be seen and heard: To listen to Cloud Cloud’s music is like floating on a cloud, a beautiful grey rain cloud.