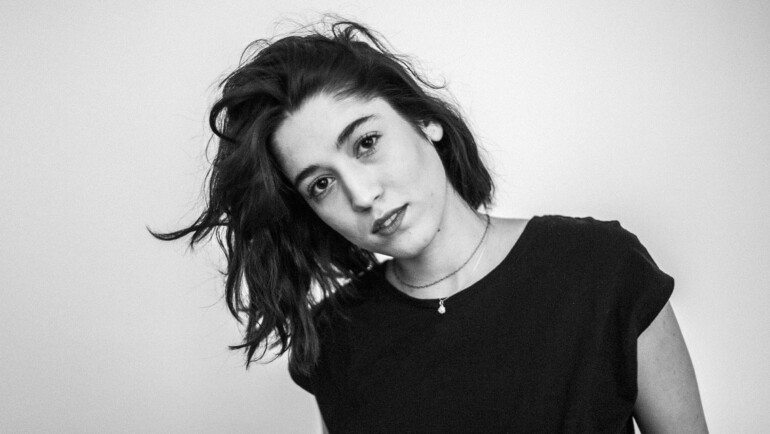 A tender and expressive voice, beautiful pop songs and a lot of feeling for the topics love, friends and family. With her first singles and an upcoming EP, the young Austrian singer OSKA is FM4 Soundpark Act Of The Month February.

Melancholy or the blues often lead to beautiful songs. Even if the artist concerned is a very life-affirming and cheerful person, as in the case of Maria Burger alias OSKA. One shouldn’t confuse the artwork with the artist and besides, we all have several facets in us. Thus the music of OSKA is at once radiant and lively, thoughtful and melancholic. Very calm and thoughtful, but also energetic and bustling.

Her voice is fragile and at the same time full-bodied. Her songs talk about love, life and family, partly from personal experience, partly empathizing with experiences of other people. So everything is there that a good pop song needs! This is also proven by the wonderful first single “Distant Universe”. A song about broken love and friendship which eventually has a chance in a parallel universe. Transposed into a wonderful video by Nikolaus Vuckovic.

Family as inspiration and protection

One would not necessarily assume that the name OSKA is the solo project of a female musician. And yet Maria has quite deliberately chosen this name for her musical works.

Maria: “Oskar is the name of my oldest brother. I simply left out the letter r. Because I wanted an alias that has to do with me and my family. And a stage name is supposed to be protective and especially the oldest brother in life is often there to protect the youngest siblings as well. I think it fits very well.”

Family is perhaps the linchpin of Oska’s music and lyrics. The musical socialization of the girl from Lower Austria was strongly influenced by her mother, who often woke her up with Irish music at an early age. This also fits well with the fact that Oska is a fan of Avec. Because in her songs too the Irish north resonates, where she also recorded the last album “Heaven / hell”. Maybe this explains a wee bit the melancholy that resonates in the songs of Oska.

Otherwise, her brothers introduced her to the world of Linkin Park, Papa Roach and Fettes Brot. Her sister, on the other hand, introduced her to the singer/songwriter and pop world, with artists such as Regina Spektor, Kate Nash, Amy McDonald and Amy Winehouse. One of the first inspirations for her to write and sing songs herself was Kina Grannis, who is not unlike Maria here, for example. Maria’s reaction to the videos was: “Cool, you can just write songs. You can just do that.”

The pain of separation and missing (someone)

The “just like that” turns out to be a longer way. In this, as she herself believes, Maria has also been fortunate to be able to work with the right people for her. Alex Pohn is responsible for the very balanced, beautiful and transparent production, being a drummer of the band Tyler and live drummer with Hubert von Goisern, Violetta Parisini, Julian le Play and Madita, with whom he has also partly worked on their albums. With Oska, he polished the songwriting and sound in his studio. The pieces of the first EP “Honeymoon Phase” sound therefore balanced and harmonious.

“The Love You’ve Lost” for example is a sad song about Maria’s family and to a certain extent a reappraisal of her parents’ divorce. Yet the lyrics are so broad that anyone who is heartbroken or in a relationship-crisis can identify him/herself. A thoughtful song about inner struggles under difficult external circumstances which near the end soars to become a more hopeful hymn. Including a cheerful whistling melody, to let in a little bit of sunshine, which symbolizes a new beginning behind the grey clouds.

“Come Home” is about the loss and one’s missing of a person. This can be someone you have lost sight of over time or someone who lives far away. But also a person who is missing. Like a relative in Maria’s family who has been missing for two years. Oska dedicated this song to her. Instead of the usual guitar, the piano is in the foreground. And the title song “Honeymoon Phase” is a laid back ballad about the most beautiful time of being in love and the reflection about not getting lost in the other person, which can happen quite fast in a relationship.

The potential in Oska, her songs and especially in her voice is far from being exhausted, although the songs of her first EP very clearly already go into one direction. But Maria has more far-reaching plans. After the release in April she will also go on a small tour to the Netherlands. Austrian concerts are to follow and next year she will release a whole album. If she pulls all this off, like working on and recording the songs of “Honeymoon Phase”, then we can expect a lot more from the young singer/songwriter.

Links:
Oska (Facebook)
FM4 Soundpark Acts of the Month (all)