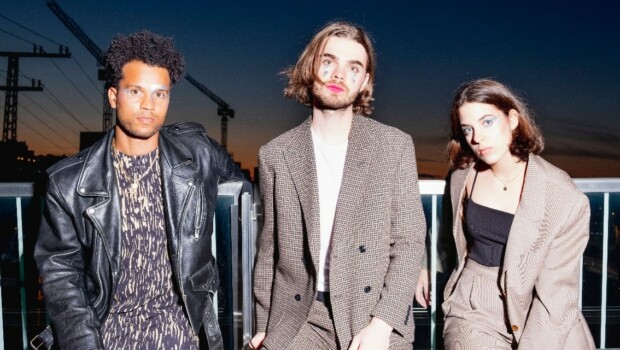 Crossover, well done. Sharktank are daring to do it and are coming up with a contemporary, genre-swirling debut on their first EP “Bad Energy”. Our FM4 Soundpark Act in November.

Musical crossovers can be a painful thing. But when they succeed, they do what they are supposed to do: attract a larger audience. Banks & Steelz is a collaboration between Interpol singer Paul Banks and Wu-Tan Clan rapper RZA, and is one of the most recent successful examples; but Jay-Z has also recorded an entire album with Linkin Park.
It’s not hard to admit that the mash-ups of soft metal, pop chorus
es and rap parts have brought out a certain, previously hidden something in all these songs. And to bring forth exactly this titillation is what the brand-new Viennese trio Sharktank has set out to do. A few weeks ago their very first single “Washed Up” was released – and climbed straight up to the top of the FM4 charts.

I know someone who knows someone

Sharktank is not a band that has grown organically, it’s rather three people getting along well with each other who have come together through connections, as is currently often the case in the Austrian music scene: rapper Mile, originally from Graz, had known Marco Kleebauer for a long time. Last June, the two of them even released an EP together, “Dirty Leaks”, filled with lean and atmospheric tracks on which Mile’s velvety rap performance in particular nods towards old school hip hop. Both have studied the music of The Notorious B.I.G. or, no surprise, of Kanye West.

A very busy musician and producer, Marco Kleebauer, who reinvents himself with Sophie Lindinger from Leyya not only from album to album, but from song to song, was mainly in the studio over the last months. On a joint tour in Switzerland, he got to know the band Bilderbuch better, and shortly afterwards also produced tracks for them. He’s also taking great care of the sonic perfection of the band Oehl – and this is where Katrin Paucz comes in.

Katrin Paucz is Oehl’s live guitarist and was “exactly what was missing”, says Mile. “We liked what we recorded there, that is, me and Marco, but we wanted to add something else, something melodic. And we thought it would be cool if we combined the indie and the rap scenes.”

A good band has a signature sound right from the first song. With Sharktank, the combination of all three influences and musical approaches results in a unique selling point: Here, every song has everything, the sing-along chorus, the narrative, thoughtful rap part, the hooks and the beats.
If you take a closer look at Marco Kleebauer’s production method, or rather his preferences – especially as far as earlier Leyya songs are concerned – you will also hear his input in these Sharktank songs: for example, the voice samples that creep into “Washed Up”, repeated later also on singles like “Too Much”, are very simple yet very cleverly arranged elements that ultimately change the entire musical mood.

The debut and the stage

When playing live, Sharktank become a quintet: Nastasja Ronck (My Ugly Clementine) and Marlene Lacherstorfer (formerly Velojet, now Pressyes and others) support the band’s broad, organic and very rhythm-section-oriented live sound. Recently they recorded a live session at the Kunsthalle Exnergasse in Vienna’s WUK. Sharktank will be on stage with the same line-up on November 29th at the Vienna WUK once again, legal regulations permitting.

“Bad Energy” is the title of Sharktank’s first EP, it will be released on November 27th. The title is not the program: Sharktank have turned their differences into one common thing, as regards content and music. As with their first single “Washed Up”, Sharktank see their mission as being right at the point where minds break down or collapse: “We wrote the song when we all were quite down and overworked, just the way many people are right now. That was a basic feeling that we packed into the song to show people that they are not alone. The song was like: Hey, this one is for you, maybe it helps”.