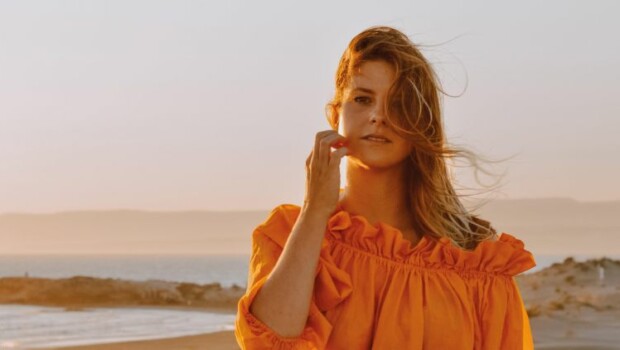 “I’VE ALWAYS BEEN EXTREMELY LAZY AS TO PRACTICING…

… and I don’t play the guitar now in a really refined way”, says Amelie Tobien about herself – but that’s not what her debut album is about either. Quite the opposite, as the sparse arrangements only serve as an accompaniment for the rough and emotional voice in the foreground. The album’s themes alternate between longing for what once was and what is to come.

“We Aimed for the Stars” stands for Amelie’s musical beginnings, i.e. for the important moment when she finally dared to stand alone on stage. Among other things, she reflected on and worked upon her time in her native Salzburg and the year she spent in Ireland that had a strong influence on her. One of her sources of inspiration is the Irish singer/songwriter Glen Hansard, with whom she also shares a love for busking. Yet, after moving to Vienna in 2018, Amelie began to change musically, not least because of new acquaintances in the Austrian capital. Is the album therefore an ending to something? “Yes and no” is Amelie’s answer. On one side, it feels like the end of an era, one in which the artist took first steps on her own and dared to make the move towards becoming a professional musician. On the other side, after this phase, which culminated in the production of the album, Amelie sounds a bit different. “But I still identify myself today with all these songs as the stories I’m telling are universal and don’t need to be completed.”

“I SHOULD GET POLITICALLY MORE INVOLVED”

The song “the docks”, for instance, is about staying true to your own values. In Dublin, Amelie worked at the so-called Silicon Docks for a big tech company. “It felt a bit like I made a deal with the devil,” she says in retrospect. While the big companies present themselves as innovative, they are partly to blame for the pollution of the docks. This hypocrisy aroused both anger and resignation in Amelie, which can be strongly heard throughout the song.

The environment is a topic that is close to the singer’s heart anyway. She appeared in Vienna at a demonstration for the climate referendum. “In general, I think I should get more involved in politics.” Amelie sees it as her duty to stand up for political issues, whether it’s for the environment or against the tougher ban on abortion in Ireland. Especially feminist issues are of great concern to her. She finds the band My Ugly Clementine admirable, as they used the presentation of the Amadeus Awards 2020 to point out the conservative nomination policy of the Awards, which still pays little attention to women and non-white people.

“WHILE EVERYONE AROUND ME IS TOURING OR RECORDING, I’M BUSKING FOR CHANGE AND PLAYING MY SONGS FOR A BEER”

Even if the idea of competition is not particularly pronounced in Amelie’s circle of acquaintances, one cannot avoid tracking the number of likes and followers on the profiles of colleagues on social media platforms. “I’m not beyond comparing myself with others”, admits the Salzburg native. Nevertheless, she finds it extremely important to support each other – not least in the truest sense of the word, namely to play as support act at concerts. At Amelie Tobien’s release concert on October 3, 2020, the talented Michael Dey aka Homonym takes over this role.

Amelie herself has also often played as support for other artists, sometimes just for a beer or two. But Amelie refuses requests for unpaid gigs from big events or companies, because she won’t let herself be ripped off. “Art must be worth something”, she emphatically affirms.

Certainly, one of the singer/songwriter’s favorite stages is the street. She likes the casual playing for strangers in a setting that’s not artificial, whether in Dublin, Salzburg or Vienna. “The intimacy and spontaneity on the street – that’s where I just feel comfortable”.

She’s especially looking forward to her release concert at fluc on October 3, which is, after all, the first concert in which she is the center of attention. “Up to now I was always just part of an event, and now it’s my own thing”.

As far as her future plans are concerned, Amelie keeps her cards close to her chest – “nothing is definite yet”, she says mysteriously. In any case, one can look forward to collaborations with other musicians, because as much as Amelie likes to perform on her own, she loves working with others even more. But she will remain true to her genre: “My soul simply is and remains folky!”