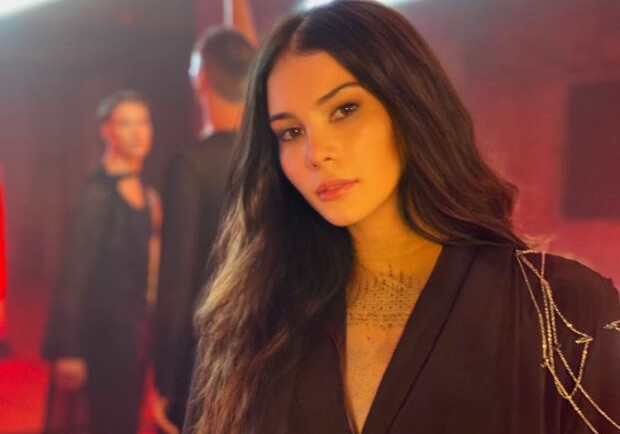 Vienna-based musician XI has only released four singles so far, but has already built up a considerable following (especially on Instagram with 16,0000 followers). Strong radio airplay, 1 million plays on YouTube and about 500,000 plays on audio streaming platforms speak for themselves. Her single “In A Lie” even made it into the FM4 charts. In an interview with Michael Ternai, XI talks about the melancholic vibe of her music, the decision to give music a try, and her musical idols.

With “Pain of Goodbye“ you have released your fourth single. I listened to all your songs and I noticed that they are quite different in terms of sound.

Xi: Musically, I wouldn’t say that there is a big difference between “In A Lie“ and “Pain of Goodbye“. They are produced by the same producer. But yes, the other two songs, which were made by another producer, are quite different. I would say that I’m still trying to find my place between the different genres. I just write the songs the way I feel, and I don’t try to stick to a certain genre. I think this would kill the creativity. Let’s put it this way, I just try to find the angle that suits me most.

How much are you involved in the creative process. You write the lyrics, but what about the music?

Xi: Im involved in all creative processes. I write all the lyrics and the melodies for the songs. Besides that I work closely with the producers on the instrumentals as well.

How did all begin? When did you start making music?

Xi: It started with writing a lot of lyrics at the age of 16 or 17. But I never really thought about making songs out of them or record them. This changed with the death of XXXTentacion. He was an artist who influenced me a lot. His death made me feel that I want to write music and continue in some way, what he had started. Maybe not exactly musically, but he was the one who actually inspired me to sing. In the end it is no longer about him of course, but initially that definitely gave me a push.

Can you tell us something about your musical roots? Have you always been into music?

Xi: Not really. When I was around six or seven, I used to take piano lessons. But this didn’t work out for me because I was doing sports professionally at this time. So, I didn’t have time to do music. But music has been following me throughout all these years. When I moved to Vienna, I had more time to discover myself and this lead me finally back to music again.
In my early teens, I really liked Rock and Alternative Rock. I listened a lot to Bands like Green Day, Linkin Park, Oasis, System of a Down and stuff like that. And I think that you can hear this in my songs “In A Lie“ and “Pain of Goodbye“ in a way. Now, I would say that I’m more into Trap. You don´t hear that echoing in my music, but in the future, I’d like to go more in this direction perhaps.

“When I’m happy, I’m happy and I’m more focused on keeping that happiness in me and I don’t have an urge to write songs about it.”

What I also recognized is the melancholic vibe of your songs.

Xi: I am actually a positive but phlegmatic person. In real life, I’m quite calm. I only write songs when I feel something. And usually, I write about something that upsets, triggers, or disappoints me. That’s why you can hear that vibe in my songs. When I’m happy, I’m happy and I’m more focused on keeping that happiness in me and I don’t have an urge to write songs about it. But when I’m sad, then I have to spit it out in some way and have to put it into something else. That’s the way my songs come out. I get a lot of feedback that my songs helped people who were feeling depressed or sad, and I believe it’s because of this relatability and the fact that I was feeling the same when I wrote the songs. This is what I aim for – for people to not feel alone when listening to them.

What are the things, you sing about?

Xi: It varies from one song to another. Usually about situations that trigger me. Things like interpersonal relationships, screwed up and unfulfilled love stories, betrayal, neglection, carelessness. I would say I sing about things that I wish were different.

What really astonished me is the incredible high number of views on your Youtube-Channel. “In A Lie“ has been watched by nearly 600.000 people. Your new single “Pain of Goodbye“ in the meanwhile nearly 500.000 times. This is really impressive for a newcomer. How did you manage to reach these high numbers? Do you have an explanation? Is there a big plan in the background?

Xi: No, not really. I don’t really have an explanation. I guess the people just liked it. But I’m happy about it, because I put a lot of work and effort in my videos. It was probably luck to a certain extent.

How do they plans for the future look like? Will you play concerts? Do you plan to release an album?

Xi: Because of the Covid situation it’s really hard to speculate about concerts in the moment. So i really can’t say, if i will be able to perform in the next weeks or months. In terms of an album, I’m not planning one in the near future.