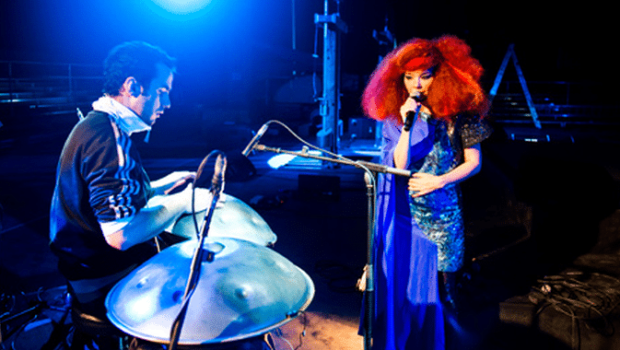 Not a bad resumee for an Austrian musician to have a collection of anecdotes about himself as a percussionist on tour with Björk. Yes – THE Icelandic pop priestess Björk we all know of. Needless to say, the amazing percussionist and Hang player, who now lives in London, is a musician who has made quite an international name for himself, enthralling listeners across the globe.

Not many musicians can claim to belong  to the best in the world on their instruments. Manu Delago has a lot to brag about, but modesty is a virtue, and he would probably be too humble to admit it.  Born in Innsbruck, he studied classic percussion at the Tyrolean State Conservatory with Norbert Rabanser and Gunnar Fras, holds a master’s degree in jazz drumming at the Guildhall School of Music in London and  completed his composition studies at the Trinity College of London. Today Manu Delago belongs to one of the few Hang virtuosos in the world and has a very unique and intriguing approach to this extraordinary instrument.

It was the Hang’s hard to define, deep and soft sound that once sold Manu Delago on this Swiss instrument in 2003. However it is not only his virtuosic techniques that have made him become such an exceptional artist. It is above all his extremely pronounced openness towards different currents and projects and an almost insatiable love of experimentation that distinguish this very busy musician. Thus, Manu Delago feels just as comfortable in jazz and improvisation  as in classical chamber music, drum’n’bass or pop.

No wonder that the multiple award-winning percussionist and composer has traveled the world and proven his skills on stage in many internationally renowned venues such as the Roundhouse, the Southbank Centre and the Barbican in London, in the Forbidden City Concert Hall in Beijing, at the Downtown Independent Theatre in Los Angeles and at the Konzerthaus in Vienna. The names of the many artists with whom he has collaborated throughout his career are also quite impressive: Shpongle, Graduale Nobili, the London Symphony Orchestra, Bugge Wesseltoft, Didier Lockwood, Stuart McCallum, Wolfgang Puschnig, Boris Grebenshikov, Georg Breinschmid and, of course, Björk.

Another degree of recognition is shown with his video on Youtube, which lists more than four million hits for his  “Hang Drum Solo” and has become one of the most popular Hang videos in the world.

Besides performing on stage with Björk and with his band Manu Delago Handmade, Manu Delago is currently in the last stages of finishing his new album ‘Bigger Than Home’, which will be released on the 5th of April 2013.

Manu Delago on his upcoming album ‘Bigger Than Home’: