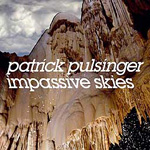 On his fourth album “Impassive Skies” (Label: DISKO B/Trost), the Austrian producer and electronic musician Patrick Pulsinger rediscovers the old-school dance floor. Eight years after his last release “Easy to Assemble. Hard to Take Apart. The Album”, he surprises once again with a musical u-turn, which this time leads him towards the club sounds of the eighties and nineties.

Over the years, Patrick Pulsinger has made a name for himself in the Austrian DJ and electronic music scene, which he has also significantly influenced as a main protagonist. Together with Erdem Tunakan, he received the Austrian Prize for music in 1999 for his adaptation of the classic ballet “Swan Lake” at the Volksoper in Vienna. Pulsinger has also made his mark internationally. There are not many local artists who can claim to have worked with stars like the Pet Shop Boys and Grace Jones.

Patrick Pulsinger never had a predictable musical career. His publications were usually totally dedicated to a more experimental, avant-garde approach, incorporating various styles. It is therefore very surprising and unusual how dance orientated his new album is. After many excursions in the areas of jazz on “Easy to Assemble – Hard To Take Apart” and classical music on “Dogmatic Sequences Series”, the Viennese musician now in a way returns back to his musical origins.

Pulsinger always was impressed by the sound of old disco records and tried to transfer this sound into the present with the help of modern synthesizers. In order to achieve the maximum effect, the sound whiz invested more time on self recorded instruments, which gives the individual pieces even more diversity. Stylistically Patrick Pulsinger still has no boundaries and combines old disco beats with elements of jazz, dub and funk. In addition, almost every track is supported by well-known colleagues of the electronic music scene, such as Fennesz, G Rizo, Abe Duque, ElektroGuzzi and Teresa Rotschopf.

Once again, Patrick Pulsinger proves with “Impassive Skies” what is still creatively possible in the field of techno music. The eight new tracks on the album wonderfully unite the history of dance music with modern production techniques, which adds up to a highly diverse and innovative masterpiece. The album “Impassive Skies” was released in Austria on June 4th, 2010.