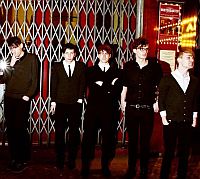 In the fall of 2007, an unusual incident happened at an after-show party of the Popkomm Berlin: Five young Austrian musicians took off their clothes to expose their birthday suits, and were directed to the bar after a few uncomfortable discussions. When asked about the reason for this move, the simple answer was: boredom. As a versatile source of self-declaration, this term is publicly proven by Ja, Panik over and over again. Ennui is not only the more elegant word for boredom, it also expresses a certain way of life that leans to a laissez-faire style and is yet far from being indifferent. The five musicians from Burgenland definitely have their own opinions on political and public ongoings, their protesting approach is just somewhat different.

Just two years before the naked incident, the young musicians teamed up to make professional music. Andreas Spechtl soon established himself as the mastermind of his earlier band Flashbax, named after an Oasis classic. With his colleagues Stefan Pabst, Christian Treppo and Manuel Dinhof, they produced the album “Ja, Panik”, which would then later become their band name. In the last song these seemingly unrelated word phrases make sense: “Ja, Panik treibt mich/Whatever gets you through the night/It’s alright, it’s alright”. These lines are already a taste of the eclectic poetry of Spechtl, who is not afraid to incorporate English as a German musician.

After the release of the album, the dynamic of the band shifted when Manuel Dinhof left the band and was replaced by Sebastian Janata. Thomas Schleicher, who accompanied the band on the first tour as a roadie, joined the band as a guitarist until 2012. Ja, Panik’s music cannot be pigeonholed into any category, their combinations of styles and ideals are just too different. Without being too clean-cut, Ja, Panik know how to brilliantly master the balance between rock’n’roll and Hamburg school, Lou Reed and Bob Dylan. When it comes to the general idea of punk, Ja, Panik are not a punk band in the literal sense, but they have entirely incorporated the lateral way of thinking.

A few years ago, the city of Vienna was the center of the band’s musical work, which not only included the writing and producing of their songs. As a true DIY band, the five musicians of Ja, Panik were involved in every step of the way – from marketing to production. And thus they released “The Taste and the Money” in 2007, causing quite a stir with the title. Just like the band’s name, the terms are taken out of context and leave the listener puzzled. “The taste is familiar and so is the sound, it burns all my money, it turns me down”. It was the full intention of Spechtl and his colleagues to cause some derangement with their lyrics. Those who want to dig deeper into the thought process behind the lyrics of Ja, Panik will find themselves even more confused. Although the song writing begins with personal experiences, they are sifted through so many foreign ideas, which make it hard to trace back the origin.

With this precise idea about the concept of their own lyrics, Ja, Panik can definitely not be called indifferent, even though Spechtl often speaks of  boredom as a motivation. With the attitude of a Pete Doherty and the nostalgic ideal of everlasting youth à la David Bowie, Andreas Spechtl is an original in the German speaking music realm. Comparisons with the eloquence of Helmut Qualtinger or the coolness of Falco adorn media reactions to the phenomenon Ja, Panik and its bandleader. And although they have already moved away from the province to enjoy the benefits of a big city, they were not able to find their personal happiness in Vienna. And so they decided to move to an even bigger city with many potentials. This unison desicion speaks for their youth and faith in their potential. In their new adopted home of Berlin, they recorded “The Angst and the Money” in 2009.

The album was not only the talk of the scene. Meanwhile, Ja, Panik have made ​​a respectable name for themselves and are mentioned in the same breath as prestigious pop names such as Blumfeld and Tocotronic. In this context, people often speak of the age of those legends and the youthful freshness of Ja,Panik. And once again they start discourses under the guise of boredom. Their response to Jochen Distelmeyer’s video “Lass uns Liebe sein” in 2009 still hovers between homage and parody. And that’s just due to the lack of an official statement on their part. 2010, they were guests at the Danube Festival in Krems, where they didn’t play a concert, but performed the set-up and take-down of equipment with staged boo’s. Directed to the audience, it was a provocation on a high level, however rather thought-provoking than anything else.

With “The Angst and the Money”, Ja, Panik have manifested their position as a controversial pop band. This genre has its roots in a niche of Hamburg musicians and the culture magazine Spex. The German band Blumfeld was – and is – the figurehead of this music direction, which is not only self-reflexive but also sensitive to political and cultural events. With “Alles hin, hin, hin”, “The Angst and the Money”, Ja, Panik opened a manifesto of self-reflection, however always with the use of words that are twisted and taken out of context.

Just as their ten-day tour of Africa in 2010, the band’s recordings for the fourth studio album also just took ten days. Under the production of Moses Schneider, Spechtl and his colleagues returned back to the early days of DIY and recorded the songs themselves. “DMD KIU LIDT” was even more anticipated by the media than “The Angst and the Money”. Rightly so, because the maturing process between the two albums  is obvious. As always, the title is a mystery, but this time almost insoluble, if one does not surrender to an in-depth research. “The manifestation of capitalism in our lives is the sadness,” is a melancholy stance on capitalism. Even pop, the always happy child of capitalism, must face up to the fact that peace, joy and pancakes also have an end.

“DMD KIU LIDT” leaves no doubt as to its individuality. Even the only cover version on the album has a new personality. Roxy Music’s version of “Bittersweet” was already wild at its time, but Ja, Panik have added  even more nervousness and eccentricity to the song. To Bryan Ferry, it might be unusual at first, but he would soon see the beauty of the expression. The bilingualism of the classic works in Spechtl’s favor, because on this album he switches back and forth even more frequently between English and German. The linguistic attention to detail goes so far that even the lyrics in the booklet are reversed, which means the lyrics sung in German are printed in English.

With “DMD KIU LIDT” they were not nominated the first time for the Amadeus Award. In 2009 the categories were “Alternative/Rock”, in 2010 “Song of the Year” as well as “Alternative”, and finally 2012 “Alternative” and “Album of the Year”.
Award nominations left aside, in the eyes and ears of the beholder, Ja, Panik is already one of the leading bands, and that after “only” four albums. The supposedly quirky rebelliousness of the five Burgenland musicians is just a facade for a deeply culturally interested group. To put it in their own words: “Our methods are controversial, and then again they’re not.”
Anne-Marie Darok
(translated from German)